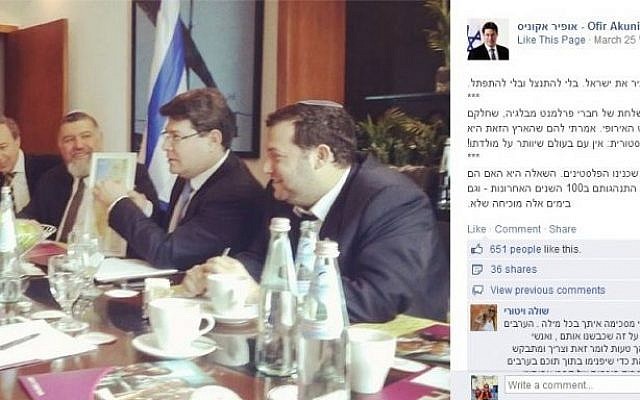 An Israeli deputy minister recently met with lawmakers from a far-right Belgian party that has been accused of anti-Semitism and Holocaust denial and is boycotted by Europe’s Jews.

Ofir Akunis, a Likud member and deputy minister in the Prime Minister’s Office, met with parliamentarians from the Vlaams Belang party while they were visiting Israel.

He defended the meeting Sunday, saying he did not know of the parliament members’ extremist backgrounds when he sat down with them on March 25.

The visit by the lawmakers of Vlaams Belang came amid fears by Jewish groups in Europe that a far-right bloc may triumph in upcoming European Parliament elections. Vlaams Belang is part of the bloc.

“This morning, I met with a delegation of parliamentarians from Belgium, some of whom are members of the European Parliament. I told them that this land is our historical homeland: there is no nation in the world that would give up its homeland,” Akunis wrote on his official Facebook page Tuesday.

Vlaams Belang, or “Flemish Interest,” advocates Flemish nationalism and independence. Along with the other parties in the right-wing anti-euro bloc, it has vowed to eschew anti-Semitism, and has distanced itself from extremist parties such as Greece’s Golden Dawn and Hungary’s Jobbik.

However, the party is boycotted by Israeli diplomats in Brussels and the European Jewish community, as well as local lawmakers, who see its stances as racist, according to Haaretz.

A senior Israeli diplomat told the paper the meeting between Akunis and Vlaams Belang was “an act of blindness, ignorance and first-rate irresponsibility.”

“This is a harsh and disgraceful blow to Jewish communities and Belgium and Europe, who are fighting the phenomenon of xenophobia and nationalist neo-fascism,” the official is quoted saying. “The fact that the party is looking for a seal of approval from Jews does not mean we can accept their statements that pretend to be pro-Israel.”

Akunis said he told the Vlaams Belang politicians that Israel “wants peace” with its Palestinian neighbors, but questions the Palestinians’ commitment to the same cause in light of “their behavior in the last 100 years.”

The meeting between the Likud MK and the delegation was organized by the head of the Samaria Regional Council, Gershon Mesika, and his deputy Yossi Dagan, the Haaretz daily reported.

The paper said Mesika and Dagan depicted the Flemish delegation as a group of Belgian parliamentarians who support West Bank settlements and oppose the Boycott, Divestment and Sanctions (BDS) movement.

In the past, the two cooperated with Austria’s far-right Freedom Party in the same way, bringing its leader to Israel.

On Sunday, Akunis reacted with surprise to Haaretz’s report on the meeting, telling Israel Radio that he was not aware of the lawmakers’ extremist background when he met with them.

Akunis explained that he devotes “a considerable amount” of his time to speaking on Israel’s behalf and defending it in the international arena.

“Israel is in a very difficult and complicated situation in the international arena,” Akunis said. “We should explain our standpoint to anyone who is willing to listen.”

The deputy minister said any “racist remarks” or “expressions of support for anti-Semitic bodies” on the Belgian parliamentarians’ part were “not brought to his attention” prior to the meeting. If they did express such sentiments in the past, he said, their remarks should be condemned.

“I expressed my views, and the members of the delegation supported them,” Akunis said of the meeting. “None of the matters that came to light in the [Haaretz] report today were brought to my attention.”

In 2001, one of the leaders of the party, Roeland Raes, doubted the scale of the Holocaust on national Dutch TV.

“I think that what we’ve been given to believe on certain points has been very exaggerated,” Roes said of the murder of 6 million Jews by the Nazis.

“The persecution and the deportation of the Jews did take place in a systematic way. But whether it was planned that everyone was going to die – well, that’s another question.”

A media furor erupted over Raes’s interview, and he stepped down as senator and party vice president after being accused of Nazi sympathies. He was charged with Holocaust denial, but the charges were dropped. In 2008, following an appeal by Jewish organizations, Raes was given a suspended four-month prison sentence and made to pay damages. In 2010, the Brussels court of appeal decided not to sentence him.

In February, Reuters reported that an anti-euro bloc marketing itself as “simply populist” was rousing concern in the European Jewish community, amid forecasts saying the bloc could gain as many as 20 percent of seats in May’s European Parliament elections.

The group, consisting of the Austrian and Dutch Freedom parties, the French National Front, the Italian Northern League, the Swedish Democrats, the Slovakian National Party and the Flemish-Belgian Vlamms Belang.

Though the bloc eschews anti-Semitic views, Jews in Europe fear their rejections of extremism conceal a less benign agenda.

European Jewish Congress president Moshe Kantor told Reuters last month that he did not believe the parties truly rejected anti-Semitism, and that he believed they were more dangerous than elements that openly expressed extremist views.

“Make order in your own home if you are not racist or anti-Semitic. Demonstrate this in fact and behavior but not in promises,” Kantor said.