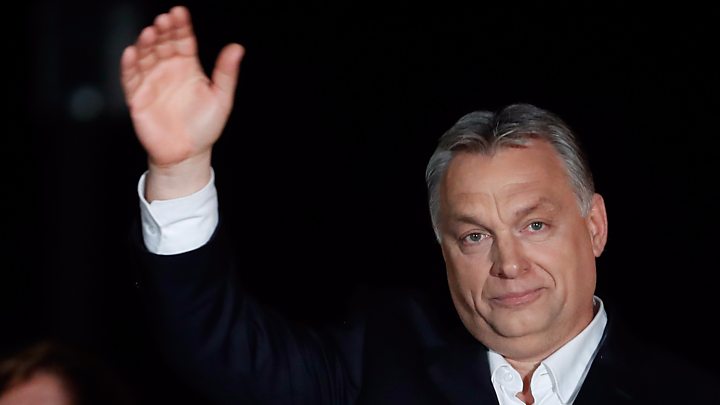 With over 98 percent of the ballots counted, an official projection gave Orban’s Fidesz Party 133 seats in the 199-seat legislature.

“Every doubt and uncertainty has dissipated. We have won,” Orban told cheering supporters gathered near the Danube River. “Hungary again is a place where it is worth living, working and starting a family. We have declared that we are not turning back.” Orban, 50, has proven himself a popular, yet controversial prime minister during his time in office. He has repeatedly butt heads with the European Union and foreign investors over his unorthodox policies, which have greatly expanded the role of the state to the detriment of private enterprise. Many Hungarians, however, see the prime minister as a champion of national interests, crediting him with lowering the personal income tax and cutting utility bills.

The vote was also widely seen as a test for the growing popularity of radical far-right party, Jobbik, which is known for its anti-Semitic and anti-Roma views.

According to the election results, an increasing number of voters in Hungary have apparently embraced the nationalist party, which won 20.7 percent of the national vote on party lists, up from 15.86 percent four years ago. In terms of seats, Jobbik is projected to win 23 seats, while a coalition of leftist groups led by the Socialist Party is expected to take 36.

Despite Jobbik’s success in the elections, party leader Gabor Vona said both he and his supporters were disappointed in the result.

Known for taking on minimum-wage jobs waiting tables or on construction sites to demonstrate he is in touch with everyday issues, Vona and his party have sought to appeal to voters by promising to create jobs, take a tough stance on crime, renegotiate state debt and hold a referendum on EU membership.

While Jobbik denies that it is racist or anti-Semitic, it has often been accused of stirring tensions. In 2012, a senior party figure proposed drawing up lists of Jewish members of parliament, though he later apologised and said he was misunderstood.

Jobbik’s strong performance in the election was immediately decried by European Jewish Congress President Moshe Kantor, who warned that it could give other far-right parties “a strong tail wind” ahead of next month’s European Parliament elections.

“The gains made by Jobbik, an unashamedly neo-Nazi political party, should serve as a wake-up call for the whole of Europe,” Kantor said in a statement. “This is truly a dark day for Hungary.”

Vona also stressed the significance of his party’s growing popularity ahead of the European Parliament elections.

“Jobbik is continuously … increasing its popularity,” Vona told party supporters late on Sunday. “And ahead of the European Parliament elections it is important to make clear that today in the EU Jobbik is the strongest national radical party.”

The election was a new low point for the leftists, who were pushed out of office in 2010. Some Hungarians worry that, without a credible challenge to his dominance, Orban has accumulated too much power.

Mesterhazy also lamented Jobbik’s strong showing, calling it a party that “is poisoning the whole of Hungarian society.”