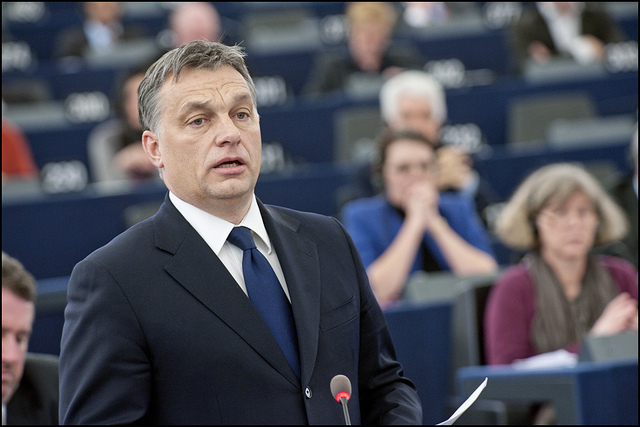 Orbán has clashed repeatedly with the European Union and foreign investors over his unorthodox policies, and after Sunday’s win, big businesses were bracing for another term of unpredictable and, for some of them, hostile measures.

But many Hungarians see Orbán, a 50-year-old former dissident against Communist rule, as a champion of national interests. They also like the fact that under his government personal income tax and household power bills have fallen.

After 96% of the ballots were counted from Sunday’s parliamentary vote, an official projection gave Orbán’s Fidesz party 133 of the 199 seats, guaranteeing that it will form the next government.

That tally also gave Orbán’s party the two-thirds majority needed for it to change the constitution, but only by one seat, and final results could still push Fidesz back below the threshold.

The same projection gave the Socialist-led leftist alliance 38 seats, while far-right Jobbik was on 23 seats.

“We have scored […] a comprehensive victory, the significance of which we cannot yet fully grasp tonight,” Orbán told a jubilant crowd at his party’s election headquarters.

Jobbik’s performance is being watched closely for clues about how other nationalist right-wing parties, such as France’s Front National and the Netherlands’ Party for Freedom, will perform in European Parliament elections next month.

Its showing, based on incomplete polling results from Sunday’s vote, was the strongest of any far-right party in the EU in the past few years, according to Cas Mudde, Assistant Professor at the School for Public and International Affairs at the University of Georgia in the United States.

He said the previous strongest result for a far-right group was the 20.5% won by Austria’s Freedom Party last year.

“There is no doubt that Jobbik will be among the strongest far-right parties in Europe, which is particularly striking because it is also one of the most extreme of Europe’s far-right parties,” Mudde told Reuters.

Jobbik has pledged to create jobs, be tough on crime, renegotiate state debt and hold a referendum on EU membership. While it denies being racist, it provides a lightning rod for suspicion among some Hungarians towards the Roma and Jews.

Its leader, Gabor Vona, often works shifts in minimum wage jobs – a waiter, a construction worker – to show he is in touch with ordinary peoples’ concerns. A senior party figure in 2012 proposed drawing up lists of Jews in parliament, though he later apologised and said he was misunderstood.

“Jobbik is continuously … increasing its popularity,” Vona told party supporters late on Sunday. “And ahead of the European Parliament elections it is important to make clear that today in the EU Jobbik is the strongest national radical party.”

In the past four years, Orbán’s policies have included a nationalisation of private pension funds, “crisis taxes” on big business, and a relief scheme for mortgage holders for which the banks, mostly foreign-owned, had to pay.

Orbán has pledged more of the same if re-elected, and the business community expects him in particular to press ahead with a plan to transfer big chunks of the banking sector into Hungarian hands, and impose more burdens on foreign power firms.

More unpredictable policies could weigh on Hungary’s forint currency, especially if the central bank – led by a close ally of Orbán’s – cuts interest rates further from record lows, against a backdrop of jittery sentiment in global markets.

His policies helped Hungary emerge from recession, but some economists say Orbán may have scared off the kind of investment Hungary needs for long-term growth.

“Big business do not want the frequent changes of policy, particularly in terms of taxes, which were characteristic of Orbán’s last term,” said Timothy Ash of Standard Bank.

The election was a new low point for the leftists, who were pushed out of office in 2010. Some Hungarians worry that, without a credible challenge to his dominance, Orbán has accumulated too much power.

Mesterhazy also lamented the strong performance by the Jobbik, calling it a party that “is poisoning the whole of Hungarian society.”

European Jewish Congress President Dr. Moshe Kantor said the electoral gains made by what he called the neo-Nazi party Jobbik in the Hungarian parliamentary elections should be a source of grave concern for Europe.

“This is truly a dark day for Hungary. This is a party that feeds on hate,” Kantor continued. “The new Hungarian government must ensure now that this hate is not tolerated, not by the government, not in parliament and not on the streets of Hungary.”

“These results have given the far-Right a strong tailwind going into next month’s European Parliament elections. It is the duty of both European leaders and voters to ensure that a strong message is delivered by supporters of democracy throughout Europe to show these racists and xenophobes that hate has no place on our continent.”

“I warmly congratulate Viktor Orbán and FIDESZ for today’s impressive electoral victory. The people of Hungary have renewed their confidence in PM Orbán and his government because he has always spoken the truth to them and because he implemented courageous reforms, which put the country’s economy back on track.”

“I am convinced that today’s electoral victory by FIDESZ will also be repeated in the European elections.”