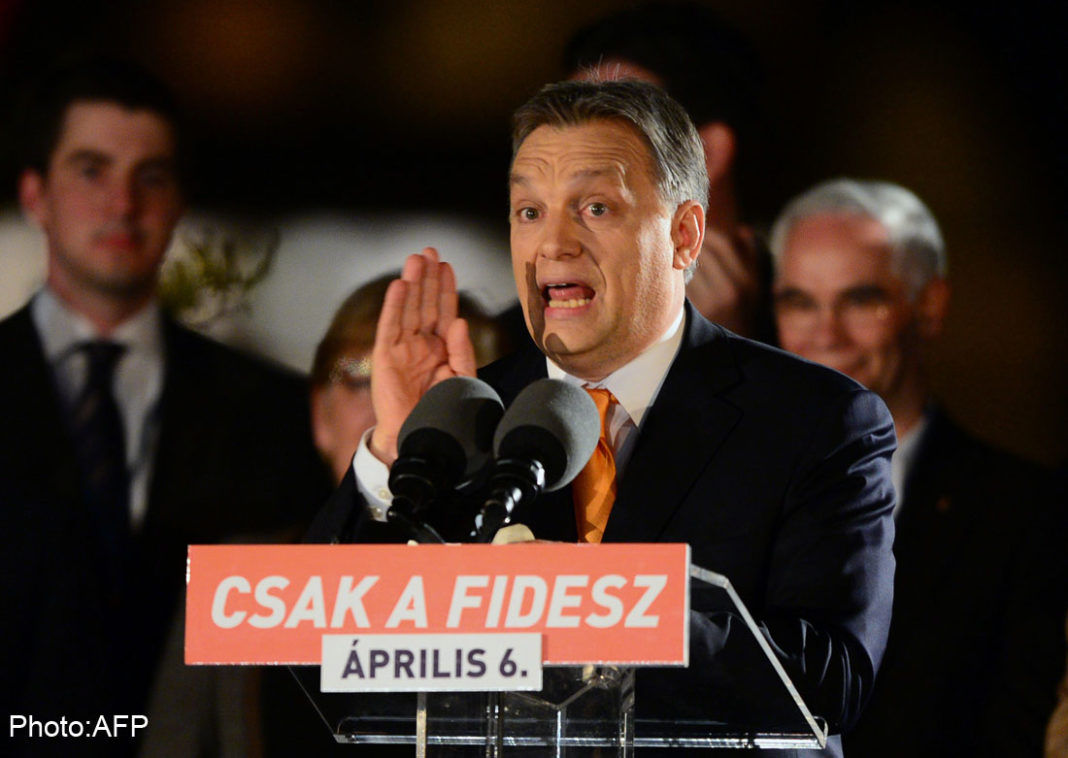 “We are on the verge of a new and wonderful era, and I invite all citizens of Hungary to enter into this extraordinary new era together,” Orban, 50, told jubilant, flag-waving supporters in Budapest on Sunday night.

“These elections were free. Organised in a free country.”

Final results and the distribution of seats in parliament were still not in, but with some 99 percent of votes counted Orban’s Fidesz party was on 44.5 percent and the far-right Jobbik on 20.5 percent.

The rickety opposition alliance of the centre-left led by Attila Mesterhazy was in distant second place with 26.0 percent, almost 20 percentage points behind Orban’s party, the results showed.

If confirmed, this would mean that Fidesz narrowly retained its commanding two-thirds majority in parliament, giving Orban a legislative carte blanche for another four years.

A crestfallen and angry Mesterhazy, 39, said late on Sunday that he accepted the result but that he refused to congratulate his adversary.

“Orban has continuously abused his power,” he said. “Hungary is not free, it is not a democracy.”

“The country has indeed arrived at the gates of a great future,” the pro-government daily Magyar Nemzet trumpeted on Monday.

“The political community led by Viktor Orban — whether you like it or not — is now able to defend, fine trim, perfect, complete, nail down, and mend the new economic and social structure put together in the last four years with enormous effort.”

Central European University political scientist Zoltan Miklosi said that Fidesz in fact lost 600,000 voters compared to 2010 but that it swept the board thanks to a weak left-wing and because Orban has changed the electoral system.

“They would have won a simple majority under a fairer system but not two-thirds,” he told AFP, calling the result a “total disaster” for the left.

Orban put the super-majority of his first term to devastating use with a legislative blitz that opponents say have tightened his control on democratic institutions in the EU member state.

Of particular concern both at home and abroad was a shake-up of the media that critics say has driven any unfavourable reporting of the government to the Internet.

Bur Orban, a patriot fond of nationalist rhetoric, says he has cleaned up the chaos left by eight years of left-wing government before 2010.

But experts say that his bashing of multinational corporations, banks and “imperial Brussels bureaucrats” has frightened away foreign investors, and that below the rosy headline data it is a different story.

The other winner of the night was Jobbik, with party leader Gabor Vona saying that ahead of European elections next month it was the “most successful radical nationalist party in the European Union”.

“This confirms that honest politics bears fruit,” he said.

The party, which denies being racist and says it is pro law and order and anti-corruption, was already the third-largest in the outgoing parliament. At the last election it scored 16.7 percent.

One of its MPs called in 2012 for a list of all Jewish lawmakers for “national security” reasons and it wants detention centres for Roma “deviants”.

“It is the duty of both European leaders and voters to ensure that a strong message is delivered by supporters of democracy throughout Europe to show these racists and xenophobes that hate has no place on our continent.”