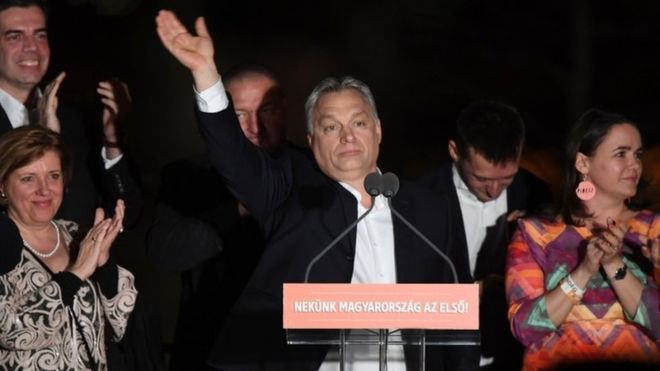 Hungarian Prime Minister Viktor Orban’s Fidesz party won parliamentary elections Sunday and narrowly secured a new two-thirds majority, but gains by a far-right party were a cause for concern.

With over 98 percent of the votes counted, the National Election Office said Fidesz had won 133 seats in the 199-seat legislature. Fidesz, a right-wing populist party, and its small ally, the Christian Democrats, received 44.5 percent of the list votes, good for 37 seats, and also won 96 of the 106 individual constituencies.

“Every doubt and uncertainty has dissipated. We have won,” Orban told cheering supporters gathered near the Danube River after securing a third term. “Hungary again is a place where it is worth living, working and starting a family. We have declared that we are not turning back.”

A coalition of left-wing groups led by the Socialist Party was projected to have 38 seats on the back of 26 percent of the list votes, plus the 10 remaining individual constituencies.

The far-right Jobbik party gathered 20.6 percent of the list votes, nearly four percentage points more than in 2010, and will likely have 23 seats.

The green Politics Can Be Different party got 5.3 percent and five deputies in the legislature.

Despite the gains, Jobbik leader Gabor Vona said both he and his supporters were “deeply disillusioned” by the result.

Jobbik’s advance, however, was quickly denounced by Jewish leaders.

“The gains made by Jobbik, an unashamedly neo-Nazi political party, should serve as a wake-up call for the whole of Europe,” European Jewish Congress President Moshe Kantor said in a statement. “This is truly a dark day for Hungary.”

Orban, who has frequently butted heads with the European Union over numerous policy issues and his government’s weakening of democratic checks and balances, said the election results proved that Hungary belonged in the bloc — albeit with one important condition.

“Hungarians have confirmed that Hungary’s place is in the European Union, but only if it has a strong national government,” Orban said.

In the eyes of supporters, the renewed two-thirds majority validates Orban’s unorthodox economic policies which have greatly expanded the role of the state to the detriment of private enterprise and increased uncertainty among investors. At the same time, the government has been able to rein in the budget deficit and state debt while lowering inflation and unemployment levels.

Many of those achievements, however, are the result of one-off measures or unsustainable policies, such as the nationalization of $14 billion in assets administered by private pension funds; imposing higher taxes on banks, numerous industries and services; enforcing lower utility prices for all households, and including Hungarians working abroad in domestic job statistics.

“I think it will be important for (Orban) to move away from short-term emergency policy measures, and move to more assurance and stability,” said Timothy Ash of Standard Bank.

Fidesz and the Christian Democrats also won a two-thirds majority in the 2010 election, allowing them to write a new constitution and pass legislation unchallenged. Orban had sought another super-majority so his government could continue to implement its policies unhindered.

Former Prime Minister Gordon Bajnai, a member of the five-party left-wing coalition, said earlier that the elections would determine whether Hungary returns to the path of moving toward Western values or drifts further toward the East.

His remarks reflected concern over a major nuclear power deal with Russia. Orban’s government has signed a contract to have a Russian company build an extension to Hungary’s sole, Soviet-built nuclear power plant. Russia is giving Hungary a 10 billion euro ($13.7 billion) loan for the project.