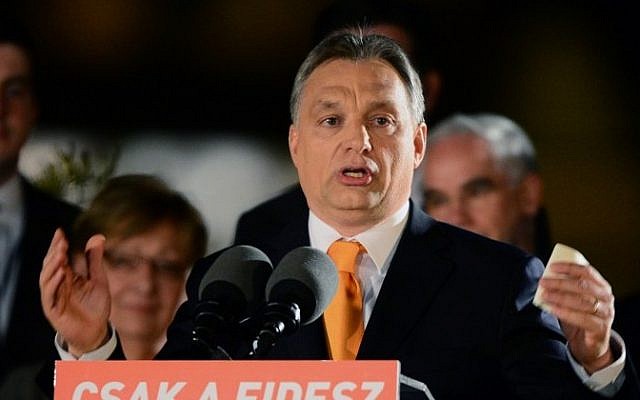 Hungary’s strongman Prime Minister Viktor Orban won a clear victory in elections on Sunday, while the far-right Jobbik party increased its share of the vote.

“We can say with absolute certainty that we won,” Orban told cheering supporters in Budapest. “These elections were free. Organised in a free country.”

With 89 percent of votes counted, Orban’s Fidesz party was on 44.8 percent of the vote, well ahead of the left-wing opposition alliance on 25.5 percent.

The anti-Roma and anti-Semitic Jobbik party of the far-right looked to have increased its share to 21.0 percent from 16.7 percent at the last election in 2010.

Reacting to the exit poll results, European Jewish Congress president Moshe Kantor said Sunday that the “unashamedly neo-Nazi” far-right party’s electoral gains should “serve as a wake-up call for the whole of Europe.”

He said the elections marked “a dark day for Hungary” and for Europe at large.

“Once again in Europe we are witnessing democracy being appropriated by those are the enemies of democracy,” Kantor said in a statement.

“This is a party that feeds on hate,” Kantor continued. “The new Hungarian government must ensure now that this hate is not tolerated, not by the government, not in parliament and not on the streets of Hungary.”

He also warned of a “strong tailwind” from Sunday’s results going into the European Parliament elections, set to take place in May.

Despite the gains, Jobbik leader Gabor Vona said both he and his supporters were “deeply disillusioned” by the result.

Gordon Bajnai, one of the leaders of the opposition alliance, called the result a “crushing defeat”.

“This is a great disappointment to those who wanted a change in government.”

It remained unclear, however, whether Orban’s victory will be big enough for the right-winger to retain his two-thirds majority in parliament, with the latest numbers indicating he might fall one seat short.

Orban has made the most of the super-majority he won in 2010, with a legislative onslaught shaking up the media, the judiciary and the central bank.

Critics, including Brussels and Washington, have expressed concerns about vital checks and balances on key democratic institutions in the EU member state.

The fate of the media has sparked particular alarm, with state outlets merged into one tame entity and independent publications starved of advertising. All are under the close eye of a new watchdog run by Orban lieutenants.

Many of these reforms have been written into a new constitution, meaning that even if the opposition were to win, it would need a two-thirds majority to change them.

Orban first rose to prominence as a long-haired student dissident, calling in a 1989 speech for Soviet troops to leave the country and for free and fair elections.

Since then he has turned the Fidesz movement that he formed with like-minded young liberals into a potent political force.

He was first elected prime minister aged just 35 in 1998, but lost to the Socialists four years later before returning to power in 2010.

Orban says his changes are aimed at turning Hungary into a “race car” after eight years of economic and political Socialist mismanagement before 2010 had reduced it to an “old banger”.

Orban has trumpeted a more than 20-percent cut in utility prices but value-added tax (VAT) is the highest in the EU. Poverty rates are high and a harsh “workfare” scheme forces the unemployed to perform menial work in return for benefits.

The fractious opposition alliance struggled to make much headway, however, due in part to a new electoral law, disfavourable media coverage and a corruption scandal.

The alliance was only formed in January, and Orban’s campaign machine had success depicting its leaders – Attila Mesterhazy and former prime ministers Bajnai and Ferenc Gyurcsany – as failures.

Jobbik, calling itself a “radical nationalist” movement focused on law and order and attacking corruption, was already the third-largest party in parliament.

One of its MPs called in 2012 for a list of all Jewish lawmakers for “national security” reasons and it wants detention centers for Roma “deviants.”

Analyst Peter Kreko from Political Capital said: “With some nuanced differences, we are basically in the same place we were in four years ago. The gap between left and right is enormous, that hasn’t changed.”

“There was no alternative, the opposition is not electable, they offered only hatred of Orban and hunger for power” student and first time voter Mark, 20, told AFP.

“Their (Fidesz’s) value system is our value system, Christian values, we’re the only country left in Europe like it,” said IT worker Reka Ferenczi, 33, drinking champagne at Fidesz headquarters.