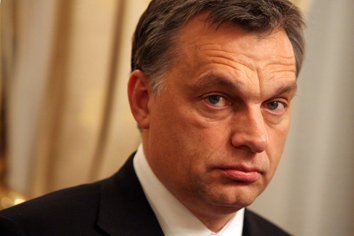 Viktor Orban won a third term in parliamentary elections held in Budapest, Hungary on April 6, having narrowly secured a two-thirds majority however it’s the gains made by far right party Jobbik that has Jewish leaders extremely concerned.

Moshe Kantor, President of the European Jewish Congress said “This is truly a dark day for Hungary.”, he also added “The gains made by Jobbik, an unashamedly neo-Nazi political party should serve as a wake-up call for the whole of Europe.” Kantor believes Jobbik’s success gives other far-right parties across the continent “a strong tail wind going into next month’s European Parliament elections.”

Jobbik’s advance, however, was quickly denounced by Jewish leaders. It was only a couple of years ago that former Jobbik leader Marton Gyongyosi had declared to the country’s legislative body that a “list of Jews” who he believes pose a “national security risk” should be compiled. Current Jobbik leader Gabor Vona said both he and his supporters were “deeply disillusioned” by the result despite the gains. “We outperformed pollsters’ expectations, but we were not able to achieve the goal we set for ourselves” in winning the 23 seats.

Jobbik, or “The Movement for a Better Hungary,” is a Hungarian radical nationalist political party that was founded in 2003. It has been described by scholars and various media sources as “fascist, Neo-Nazi, racist, anti-Semitic, anti-Roma and homophobic.” Jobbik’s ideology is predicated on right-wing populism, a strategy that relies on a combination of ethno-nationalism with anti-elitist populist rhetoric and a radical critique of existing political institutions.

Since registering as a political party in 2003, Jobbik has garnered increasing influence in Hungarian society as it radicalized gradually, vilifying Jews and the country’s 700,000 Roma population. The group gained notoriety after founding the Hungarian Guard, an unarmed vigilante group reminiscent of World War II-era far-right groups. It entered the Hungarian parliament in the 2010 elections on a campaign drawing on suspicion of Roma and Jewish minorities and attracting support from voters frustrated by the economic crisis plaguing Europe.

The election is the second straight in which Orban’s right wing party has received two thirds majority. In the eyes of supporters, the renewed two-thirds majority validates Orban’s unorthodox economic policies which have greatly expanded the role of the state to the detriment of private enterprise and increased uncertainty among investors. At the same time, the government has been able to rein in the budget deficit and state debt while lowering inflation and unemployment levels.

Economists caution that the policies of “desperation” which have improved Hungary in the short term, will be hard to sustain moving forward. “Every doubt and uncertainty has dissipated. We have won,” Orban told cheering supporters gathered near the Danube River after securing a third term. “Hungary again is a place where it is worth living, working and starting a family. We have declared that we are not turning back.”

Orban’s Fidesz party, a center right regime, denounced Jobbik’s statements back in 2010 but critics point out that he has not been strong enough to do away with growing anti-Semetic factions within the parliament and his own party. Jobbiks growth in the 2014 elections are a sure sign of this.