One In Five Votes For Antisemitic Party In Hungarian Election 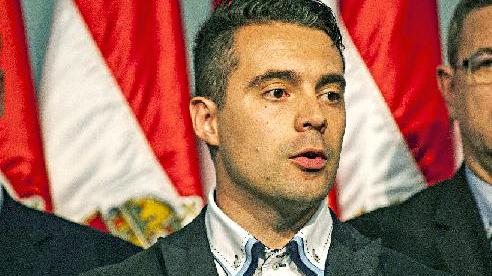 Hungary’s far-right Jobbik party increased its support in Sunday’s general election to 21.25 per cent of the vote, up from 15.9 per cent in 2010.

The party will now have 23 seats out of 199 in the newly downsized parliament.

“This is a party that feeds on hate. The new Hungarian government must ensure now that this hate is not tolerated, not by the government, not in parliament and not on the streets of Hungary.”

At a press conference on Monday, Prime Minister and Fidesz leader Viktor Orbán downplayed Jobbik’s result, emphasising that the party will have a smaller proportion of seats in the new parliament.

Without mentioning Jobbik by name, he said: “Fidesz and the [coalition partner] Christian Democratic People’s Party are guarantees that, in Hungary, extremes from the right or from the left will not have a decisive role.”

President of the Conference of European Rabbis, Chief Rabbi Pinchas Goldschmidt, said the increase in Jobbik’s popularity was “a problem for Hungary and a problem for Europe”.

He said: “The upsurge of far-right parties like the NF in France and what’s happened now in Hungary, is the result of growing discontent of the voters in Europe with today’s political system and it is a dangerous protest vote.”

He said the surge in popularity of the far-right had an impact on the Jewish community in Europe. “Both countries, Hungary and France, have seen an increased emigration of Jews.”

Fidesz won 44 per cent of the vote in the election and 133 seats, reclaiming its substantial parliamentary majority.

All the party’s seats were won through a party list system based on proportional representation.

Daniel Bodnar, chairman of the Jewish Hungarian group the Action and Protection Foundation, said the key to fighting antisemitism was getting “wider social consent” on excluding extremist parties from democratic institutions.

He anticipated that the Jewish community would continue to try to co-operate with the Orbán government, which has clashed with Jewish groups in the past.

“There are way too many historically unresolved issues between the society and Jewish community to be able to afford not to re-initiate or carry on the connection with any presentable future governments.”

On Tuesday, construction began on a controversial memorial to the victims of the German occupation.

It was supposed to have been erected in March but was postponed after Jewish organisations protested, saying it was a whitewash of Hungary’s role in the Holocaust.