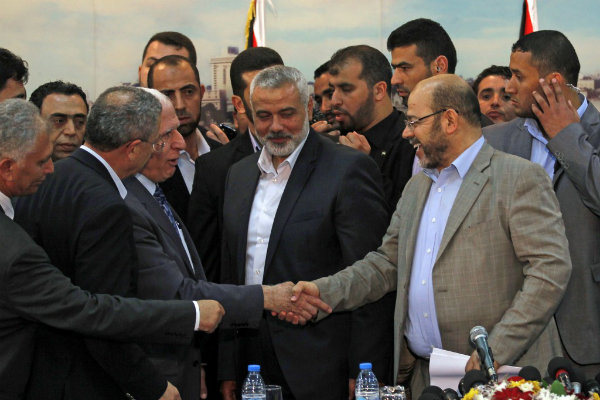 The Obama Administration on Wednesday signaled its support for Israel’s decision to cancel further peace talks with the Palestinian Authority after the latter concluded a unity agreement with the Hamas terrorist organization.

“It’s hard to see how Israel can be expected to sit down and negotiate with a group that denies its right to exist,” US State Department Spokesperson Jen Psaki said in reference to Hamas.

Israel has long insisted that it cannot make genuine peace with a Palestinian government that includes Hamas.

In 2006, the Palestinian public responded to Israel’s position on the matter by overwhelmingly voting Hamas into power in national legislative elections. An internal power struggle with its rival Fatah kept Hamas from exercising its full authority. But Palestinian leader Mahmoud Abbas (Fatah) this week demonstrated that he had no problem reconciling with Hamas, even if doing so put peace with Israel further out of reach.

The deal forged between Abbas and his Hamas rivals calls for the formation of a unity government in the next five weeks, and could see the Palestinian leader visit the Gaza Strip for the first time since it was seized by Hamas in a bloody coup in 2007.

“I said this morning that Abbas needs to choose between peace with Israel and an agreement with Hamas, a murderous terrorist organization that calls for the destruction of the State of Israel and which both the United States and the European Union define as a terrorist organization,” said Israeli Prime Minister Benjamin Netanyahu in a statement released to the press.

“This evening, as talks are still ongoing about extending the negotiations, Abbas has chosen Hamas and not peace,” he continued. “Whoever chooses Hamas does not want peace.”

Justice Minister Tzipi Livni, Israel’s chief negotiator in talks with the Palestinians, agreed: “The reconciliation agreement that Mahmoud Abbas signed with Hamas is a bad step, which not only caused the cancelation of [negotiations], but cast a heavy shadow on the possibility to progress.”

Livni added that Israel “has a duty, even when we want peace, not to stop seeing reality with eyes wide open: Hamas combines religious Muslim extremist ideology with terrorism and doesn’t recognize our right to exist.”

Finance Minister Yair Lapid said both the Fatah-Hamas unity agreement and Abbas’ recent decision to violate agreements with Israel by unilaterally seeking recognition for “Palestine” called into question whether or not the Palestinians really want a state of their own, or rather, a state alongside Israel.

“Hamas is not a government, it is a Jihadist terror organization that has inscribed on its flag the killing of civilians – women, children, old people – just because they are Jewish,” Lapid reminded a gathering of the European Jewish Congress in Tel Aviv.

At an emergency cabinet meeting in Jerusalem on Thursday, Netanyahu was reportedly urged to go beyond simply canceling a few negotiating sessions, and to impose real sanctions on the Palestinian Authority.

Palestinian leaders, meanwhile, maintained that unity with Hamas should not preclude a negotiated settlement with Israel. Abbas was quoted as saying that bringing Hamas into the PLO (the parent organization of the Palestinian Authority) would somehow bolster the chances of a lasting peace.