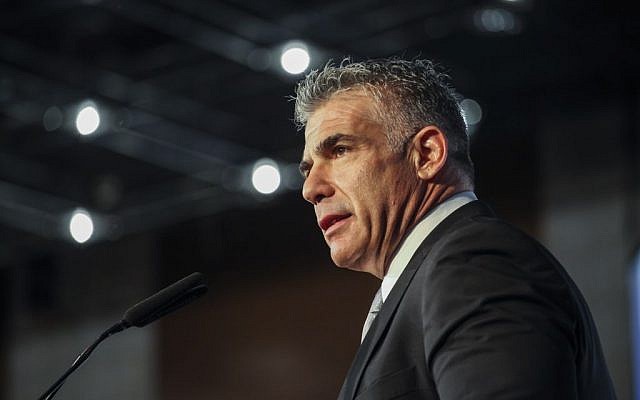 A unity deal between rival Palestinian factions is even worse than Ramallah’s threat to dismantle the Palestinian Authority, Finance Minister Yair Lapid said Wednesday, issuing a scathing attack on the Palestinian leadership and questioning whether it is even interested in a state.

During a speech to representatives of the European Jewish Congress in Tel Aviv, Lapid lambasted what he characterized as the Palestinians’ stubborn attitudes in peace negotiations.

“The fundamental principle of a nation that wants independence is if you are given something then take it, afterwards you can bargain about the details,” he said, noting that 90 percent of the issues could be resolved easily with the other 10% of core issues, such as Jerusalem’s status, dealt with later.

“As far as I know the Palestinians are the first nation in history that treats independence like a zero sum game.”

“Do the Palestinians really want a state?” he asked. “If the answer is ‘yes’, they could have a state in six months.”

Addressing a unity pact announced hours earlier between Hamas and the Fatah faction of the Palestine Liberation Organization, Lapid noted that Fatah, which dominates the PLO, made no demands from Hamas to give up its terror policies before signing the agreement.

Lapid, head of the centrist Yesh Atid, said a threat to dissolve the PA and hand responsibility for the West Bank back to Israel was “illogical,” but maintained that the Fatah-Hamas unity deal was even worse.

“Hamas is not a government, it is a Jihadist terror organization that has inscribed on its flag the killing of civilians – women, children, old people – just because they are Jewish,” he said.

Lapid, a freshman minister who has mostly focused on domestic issues, said that as long as Israel’s security needs are met, he and his party will wholeheartedly support the establishment of a Palestinian state, a position he claimed most Israelis agree with.

“My party and I believe we should separate from the Palestinians as quickly and as sharply as possible,” he said. “We don’t want a marriage to the Palestinians, we want a divorce.”

Lapid said that Israel has made more than one offer in the past to establish a Palestinian state and on each occasion the offer was rejected.

“The question that is left is do the Palestinians want their own state, and if so, do they want to set it up alongside the Jewish state? Or have they never abandoned their original vision, a Palestinian state instead of Jewish state?”