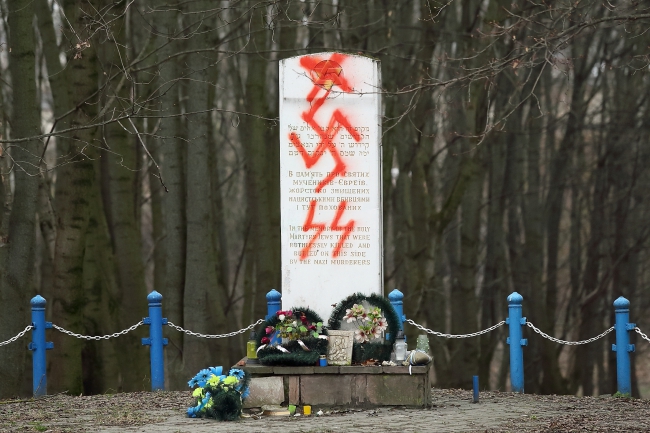 For an increasing number of Jews throughout Europe, the threat of persecution, smoldering hatred, and growing anti-Semitism has them planning or at least considering immigration to Israel.

Jewish survivors of Hitler’s Holocaust and students of the events leading to the massacre of 6 million Jews may be especially sensitive to the mounting anti-Semitism, in both the private and public sectors of Europe.

As the violence escalates and the political uncertainty persists, Ukrainian Jews are weighing their options for the future.

“An Israeli agency reports that the immigration of Ukrainian Jews to Israel has increased 142% since last year amid rising concerns over anti-Semitic displays in the embattled Eastern European country.”

Anti-Semitic violence is rising, including burnings of Synagogues and reported attempts to have Jews register with the state.

Jewish community leaders in the port city of Odessa, Ukraine, say they have an evacuation plan in place should the situation further deteriorate.

Interestingly, some Christian agencies are spearheading the evacuation plans for the Ukrainian Jews.

Ethnic Russian Jews have been immigrating to Israel since the late 1800’s due to persecution, with the last mass departure occurring in the early 1990’s.

France, likewise, is experiencing a growing exodus of Jews.

What is driving this increased immigration?

According to Ariel Kandel, the head of the Jewish Agency’s French chapter, “a “climate of anti-Semitism” along with the prevailing gloomy economic situation in France is the motivation.

Elsewhere in Europe, Greece continues to see a sharp rise in anti-Semitism.

The population of Greek Jews was decimated by the Holocaust. In 1941, prior to the German occupation of Greece, there were 77,377 Jews thriving in the country. After the deportations to the Death Camps, only 10,000 Greek Jews remained.

Today Greece only has about 5,000 Jews remaining in the country.

Political developments, particularly the rise of the Neo-Nazi, Golden Dome Party, give cause for concern to the small minority of Jews living in Greece.

The severe economic crisis in Greece appears to be the impetus for the renewed hatred of Jewry in the beleaguered nation. In fact, the Golden Dome party places the blame for the overall economic catastrophe in Europe squarely on the shoulders of the Jews, according to an article in the Jewish Week.

It is expected that on May 25th, Greece will elect its’ first neo-Nazi politician, a member of the Golden Dome Party, to sit on the European Union Parliament.

A staggering 69% of the population of Greece admits to anti-Jewish bias according to the Global Impact 100 Poll, conducted by the Anti- Defamation League. No doubt, this bias will help facilitate the election of Golden Dome politicians.

The ADL polled over 53,000 respondents in 102 countries and found that about a quarter of worldwide respondents can be categorized as anti-Semites.

While some European countries have seen a decline or stabilization in anti-Semitic views, notably the Czech Republic, the numbers still cause great concern to Jews living in Europe.

In a speech, last week, European Jewish Congress President Dr. Moshe Kantor asserted that “normative Jewish life in Europe is unsustainable” as long as the continent’s Jews continues to live in fear.”

A November 2013 study by the EU’s Agency for Fundamental Rights revealed that nearly a third of Jews in several European countries are considering emigration causing Kantor to assert that “Jews do not feel safe or secure in certain communities in Europe.”

Some Jews see shocking similarities between Pre- WWII Europe and today. Economic crises were used to fuel hatred of the Jews who were seen to be in control of the financial world, an old but pervasive stereotype.

Following the Holocaust and subsequent rebirth of the nation of Israel in 1948, many thousands of Jews immigrated to Israel despite difficulties imposed by foreign governments opposed to their immigration.

By 1953, 170, 000 survivors of the Holocaust had made it safely to Israel. Many thousands of others fled to the US, Canada, and other host nations.

Severe persecution and hatred caused a mass exodus of Jews from Europe in the post WWII years, with the majority entering Israel.

Perhaps the only place many Jews really feel safe is Israel.

“It shall come to pass in that day that the Lord will set. His hand again the second time to recover the remnant of His people who are left,” records Isaiah the Prophet some 2000 years ago. (Isaiah 11:11)

Apparently, persecution of the European Jews is again facilitating mass repatriation, thus fulfilling God’s promise made through His Prophet Isaiah.