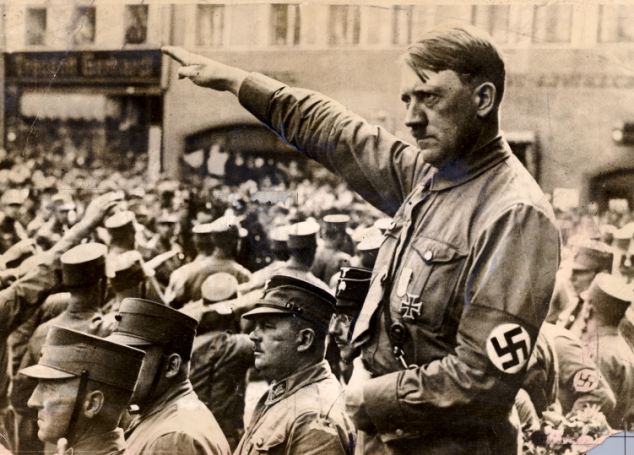 A court in Switzerland has ruled that the Nazi salute (Sieg Heil!) is not a criminal gesture, if it’s used to “express one’s convictions”, but not to “propagate the ideology,” the Associated Press news agency says.

Representatives of the Federal Supreme Court of Switzerland (Lausanne) think that the Nazi salute (Sieg Heil!) demonstrated in a public place isn’t always a criminal gesture – in the case, when a person uses it to express his own convictions and doesn’t want to impose them on others, the salute can’t be considered a crime.

Thus, the court’s decision discharged an order of a minor court that convicted a man, who used the Nazi salute during a mass meeting of 150 people in 2010. The Nazi salute was used by the Third Reich; its members raised their right hands at an angle of 45 degrees with unbent palms and yelled “Heil Hitler!” (Hail Hitler!).

The greeting of German Nazis is often mixed up with the greeting of Roman soldiers, which was used by Italian fascists, and then by German social-nationalists. Roman soldiers greet each other by raising their hands from their hearts, while Nazis just raise them from any position.

In Germany as well as in Austria these actions are penal. Russia also wants to adopt a bill, stipulating that people, who use the Nazi salute and similar greeting, are to be fined.

In Russia, the Nazi salute is regarded as propaganda of Nazism and comes within an administrative punishment that results in a 500-1000 ruble fine or the violator can be put in jail for up to 15 days.

Russian President Vladimir Putin has signed a bill making attempts to “whitewash Nazism” punishable with hefty fines and prison sentences, the Kremlin press service said Monday. The bill is based on the results of the Nuremberg Trials held by the Allies in 1945-1949, which convicted most surviving Nazi leaders of war crimes, denounced fascism and proclaimed most Nazi organizations as criminal.

“The Federal Law makes it a criminal offence to deny facts recognized by the international military tribunal that judged and punished the major war criminals of the European Axis countries, approving the crimes this tribunal judged, and deliberately spreading false information about the Soviet Union’s activities during World War II,” the Kremlin press service said in an English-language statement.

The Federal Law also makes it a criminal offence to publicly spread information on military and memorial commemorative dates related to Russia’s defense “that are clearly disrespectful of society, and publicly desecrate symbols of Russia’s military glory,” the Kremlin said.

Russia’s upper house of parliament, the Federation Council, approved the bill on April 29.

The bill was backed by a total of 130 Russian senators and opposed by just one, while two senators abstained from the vote.

Publicly desecrating symbols of Russian military glory or spreading information disrespecting public holidays related to the country’s defense will be punishable by a fine of up to 300,000 rubles ($8,400) or community service for up to a year.

The Soviet Union’s role in the Allied victory in World War II is heavily relied on by Russian authorities to instill a sense of pride and patriotism among the population, with spectacular anniversary parades and ceremonies held each year.

The president of the European Jewish Congress declared that the European democracy is much too tolerant to bar the way to the rebirth of fascism.”Democracy in its present-day form undermines the rights, freedoms and security of the majority of Europeans.

The absence of any adequate legal basis is not the only cause of this situation.” The hands of the European governments are tied by present-day unlimited interpretations of tolerance, Moshe Kantor said at the international conference in St. Petersburg entitled “Neo-Fascism in Europe: 70 Years After.”

The European Jewish Congress president said that neo-Nazi and ultranationalist forces form political parties in European countries and, with support from the far-right sympathizers, take seats in local and national parliaments.

In Greece and Hungary classical neo-Nazi parties with notorious symbols and rhetoric, as well as with public marchers and appeals for action against immigrants in general, and against Jews and Gypsies in particular, have taken solid positions, he said.

“Our responsibility as descendants of those who have fallen must make us strong enough to raise a secure barrier in the path of fascists” Moshe Kantor added. “The Europeans were unable to do so at the beginning of the 20th century. Will we be able to avoid the mistakes they made? It is an objective far from trivial.”

“Paradoxically, the main paradigms and barriers to achieving this are those fundamental European values – democracy and tolerance,” he concluded.

Veterans of the Latvian Waffen SS and their supporters marched in the Latvian capital Riga to honor their comrades killed fighting for Nazi Germany during World War II. Several arrests were made after the march walked into an anti-fascist demonstration.

The annual event has stirred controversy, not for the first time, sparking outrage both in Latvia and abroad as many consider it a glorification of Nazism.

Authorities in Riga had banned the parade in previous years due to security concerns. This year, the Riga City Council’s first Russian mayor, Nil Ushakov [Nils Ušakovs], also banned public gatherings on March 16, what many consider Legionnaires’ Day, in order to prevent riots.

However, the council has allowed the demonstration this year, ruling that such gatherings pose no threat to public safety.

At the same time, a small group of mainly Russians protested behind barricades about 15 meters away. They blared war sirens and Soviet songs to disperse the crowd. Some chanted “Shame!” and “Nazism won’t pass!”

A large number of police units have been deployed to keep the two sides apart.

At least five people were arrested at the Saturday procession, police said.