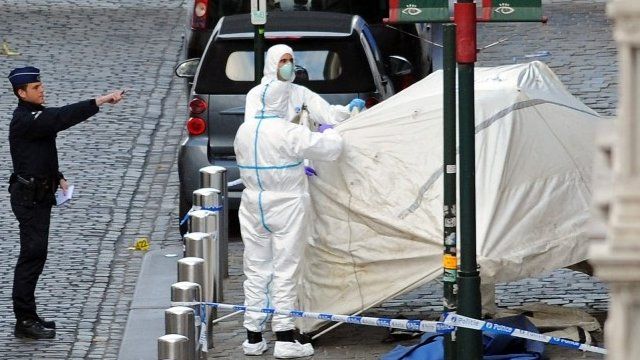 A gunman attacked the Jewish Museum in the Belgian capital Brussels Saturday, killing at least three people. Authorities are investigating whether the attack was motivated by anti-Semitism.

“The attacker arrived by car, got out, fired on people at the museum entrance, and returned to the vehicle which then sped away,” BBC reported.

Two men and a woman died in the attack and a fourth person was seriously wounded.

Unconfirmed reports mentioned that Belgian authorities arrested one suspect. A witness had seen the license plate of the gunman’s car and reported it to the police.

According to CNN, “The person involved in the attack was carrying bags, and police were asked to look inside the museum to ensure that no devices were left behind.”

Following the shooting, police blocked the streets around the Jewish Museum, which lies in a busy shopping and tourist hub in central Brussels.

While it’s too soon to suspect anti-Semitism as the motive, authorities in Belgium believe there are strong reasons to suspect that to be the case.

Israeli newspaper Haaretz reported on the incident, saying, “Belgium is hardly a leader in anti-Semitic incidents, but increasing reports in recent years may point to a change in atmosphere there.”

“The shooting in Belgium is part of a trend of increased attacks on people, such as the shooting in Kansas City, in which three people were killed last month at a Jewish center. Even though these attacks are fewer than those committed against property, they raise great concerns,” Haaretz reported.

Belgian and EU politicians condemned the attack at the Jewish Museum. The shooting comes close to a day before polls open across Europe for elections to the EU Parliament.

“Far-right groups, some of which are tainted by a history of anti-Semitism, are expected to perform well in voting for the European legislature, which began on Thursday in Britain and the Netherlands and comes to an end Sunday in other members of the 28-nation European Union,” The New York Times reported.

CNN quoted European Jewish Congress President Moshe Kantor as saying, “While we don’t not yet have full information regarding the background to this attack, we are acutely aware of the permanent threat to Jewish targets in Belgium and across the whole of Europe.”