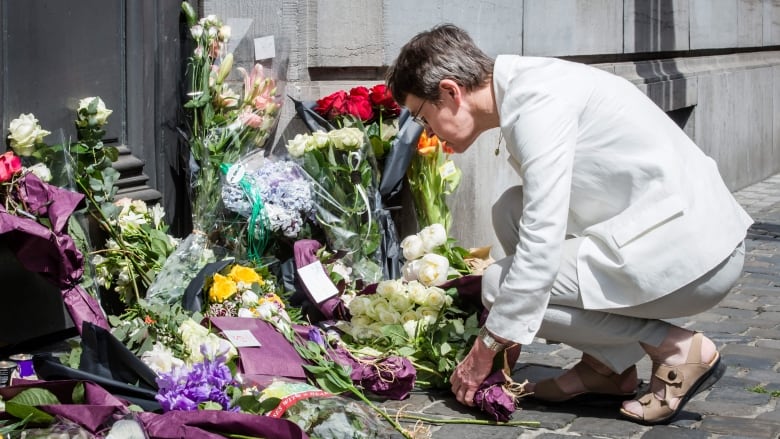 Belgium launched a nationwide manhunt Sunday for a lone suspect in a shooting attack at the Brussels Jewish Museum as the toll in the attack rose to four dead.

The attack, which came on the eve of national and European Parliament elections, led officials to immediately raise anti-terror measures and increase protection for Jewish sites.

Video of the attack showed an athletic man with cap calmly walking into the Jewish Museum, getting out a Kalashnikov shoulder rifle and starting to shoot before briskly walking away.

No one has claimed responsibility for the killings.

A surveillance camera shows a man shooting at the Jewish museum in Brussels, Belgium, on Saturday Police stepped up security at Jewish institutions, schools and synagogues.

She said the gunman who killed an Israeli tourist couple, a French woman and a Belgian man with shots to the face and throat “probably acted alone, was armed and well prepared.”

The fourth victim died Sunday afternoon, said a government official who asked not to be identified because the news had not yet been officially announced.

Officials said the shooter parked a car in the swanky Sablon area of antique dealers, hip cafes and art galleries. The museum said in a statement the gunman came in, started shooting at the tourist couple at the entry “and then went on to the reception, where he shot the attendant.”

Police detained one suspect late Saturday but he was soon released and is now considered a witness.

Van Wymersch said “all options are still open” regarding a motive for the shooting spree but the government has said it had the hallmarks of an anti-Semitic attack.

On the heels of the Brussels attack, two Jewish men were attacked as they left a synagogue in the Paris area late Saturday.

As in Belgium, Interior Minister Bernard Caseneuve ordered police around France to increase security at Jewish houses of worship and other Jewish establishments.

Israeli Prime Minister Benjamin Netanyahu blamed the shooting on European incitement against Israel and criticized what he called “weak condemnation” of anti-Semitic acts.

“There are those in Europe that are quick to condemn every building of an apartment in Jerusalem, but do not rush to condemn, or condemn with weak condemnations, the murder of Jews here or in Europe itself,” Netanyahu said at the opening of his weekly Cabinet meeting that

He also called Netanyahu early Sunday “to express the deep solidarity of Belgium with the Israeli population.”

Afterward, Netanyahu was quoted as saying that Di Rupo was the “only European leader who called me about this matter.”

“Attacks on Jewish targets in Europe do not exist in a vacuum, but are part and parcel of an overall climate of hate and incitement against Jewish communities,” Kantor said.

UN Secretary General Ban Ki-moon’s spokesperson said on Sunday that Ban was “shocked” by the shooting.

“The Secretary-General notes that, while the investigation is ongoing, the location of the attack points to a possible anti-Semitic motivation behind it,” the spokesperson said in a statement.

“[The Secretary General] reiterates his strong condemnation of all forms of racism, racial discrimination, xenophobia and related intolerance and trusts that Belgian authorities will do everything possible to bring the perpetrator or perpetrators of this crime to justice swiftly.”

Meanwhile, Pope Francis condemned the deadly shooting as anti-Semitism as he arrived in Israel for the final leg of a Holy Land pilgrimage.

Veering off a prepared text, Francis deplored “this criminal act of anti-Semitic hatred” in Brussels.

“With a deeply pained heart, I think of those who have lost their lives in the cruel attack that occurred yesterday in Brussels,” he said. “I entrust the victims to God’s mercy and invoke recovery for the injured.”