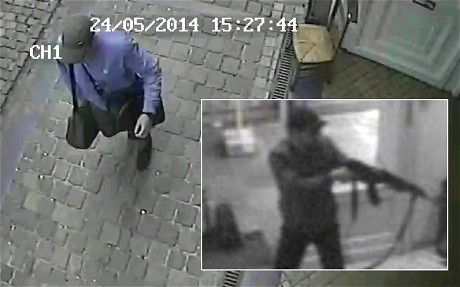 Benjamin Netanyahu set himself on a collision with European leaders on Sunday by accusing them of “hypocrisy” for allegedly failing to adequately condemn a suspected anti-Semitic attack in Brussels that killed four people, including two Israelis.

Police in Belgium were still hunting for a lone gunman who escaped the scene after carrying out Saturday’s deadly attack on the Jewish museum in the heart of one of Brussels’ most fashionable districts.

Video footage from a security camera released by the Belgian police showed the perpetrator – who appeared to be of medium and athletic build – entering the museum and firing at his victims with a gun featuring a Kalashnikov-style folding stock. He then fled on foot towards Brussels’ Marolles district, where he disappeared.

Two of the victims were identified as Israeli tourists, Emanuel and Miriam Riva, aged 54, and 53, from Tel Aviv, who are survived by 15 and 16-year-old daughters.

A French volunteer at the museum was also killed, and a 24-year-old man died in hospital on Sunday afternoon after suffering neck and face wounds.

Brussels’ public prosecutor’s office said it was yet to establish a motive for the attack but said the its location suggested anti-Semitism – a conclusion taken as read by many Israeli politicians.

Mr Netanyahu, the Israeli prime minister, seized on the arrival of Pope Francis in the Holy Land to criticise European reaction as too muted – while blaming the incident on “constant incitement” against Israel by “elements in the Middle East and Europe”.

Speaking on his arrival in Israel, the Pope referred to the attack as “this criminal act of anti-Semitic hatred.”

“With a deeply pained heart, I think of those who have lost their lives in the cruel attack that occurred yesterday in Brussels,” he said. “I entrust the victims to God’s mercy and invoke recovery for the injured.”

Mr Netanyahu told a meeting of the Israeli cabinet: “We appreciate the Pope’s strong stand against anti-Semitism, especially in light of the surging Jew hatred that we have witnessed in recent days.

“There are elements in Europe that rush to condemn the construction of a flat in Jerusalem but do not rush to condemn – or offer only weak condemnations of – the murder of Jews here or in Europe itself and, even worse, welcome unity with a terrorist element such as Hamas, which calls for the destruction of the State of Israel. We oppose such hypocrisy, we protest against it.”

The Israeli leader returned to the theme in a telephone conversation with Elio Di Rupo, Belgium’s prime minister, who had called to condemn anti-Semitism and send condolences to the Israeli victims.

“As of now, you are the only European leader who has called me on this issue,” Mr Netanyahu told his Belgian counterpart, according to a statement released by his office. “I am very disturbed by the growing anti-Semitism in Europe. There must be zero tolerance for anti-Semitism toward Jews and their state.”

In fact, Baroness Ashton, the EU’s foreign policy chief, had already condemned the attack “unreservedly” before Mr Netanyahu’s criticisms, Haaretz newspaper reported. “I send my condolences to the families of the victims and express my solidarity with the Belgian authorities and the Jewish community,” Baroness Ashton said, urging all possible steps to catch the perpetrators.

Separately, David Cameron, the Prime Minister, and William Hague, the Foreign Secretary, each wrote on Sunday to Mr Di Rupo expressing their outrage. “I was appalled to hear of the shootings at the Jewish Museum yesterday,” Mr Cameron wrote. “We join you in condemning this dreadful attack and will work with you to confront such bigotry across Europe.”

Moshe Kantor, president of the European Jewish Congress, accused European governments of “laissez-faire attitudes” towards anti-Semitism and extremism and announced that he would hold “crisis talks” with Mr Di Rupo

“Attacks on Jewish targets in Europe do not exist in a vacuum, but are part and parcel of an overall climate of hate and incitement against Jewish communities,” he said.

“Anti-Semitism begins in the public domain, it gains international legitimacy and becomes normative even in our national parliaments but it always ends in killing Jews.”