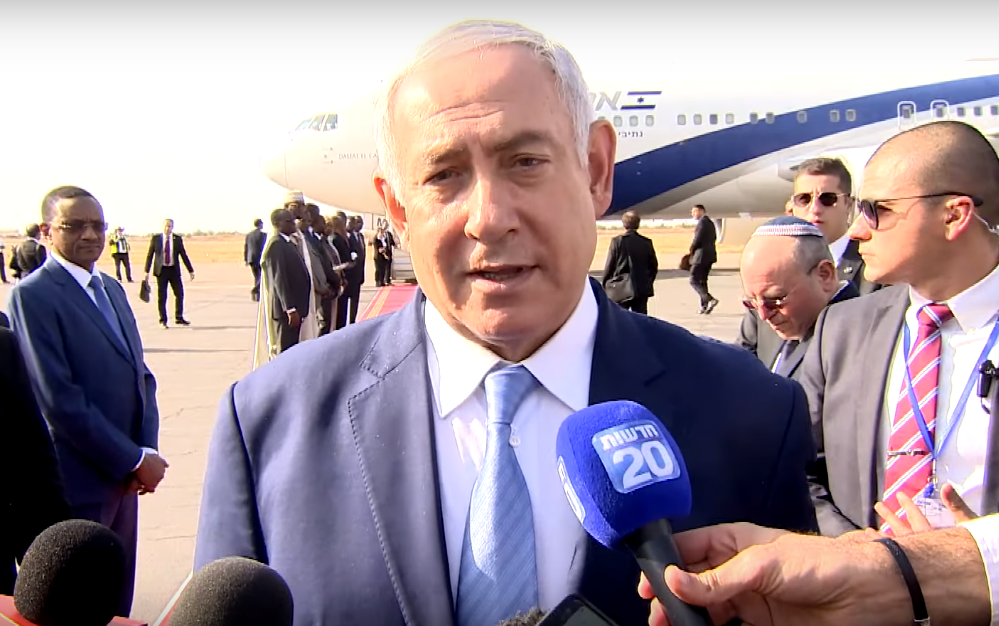 Prime Minister Benjamin Netanyahu condemned the shooting and killing of four people at the Jewish Museum in Brussels on Saturday.

He said he shares in the grief of the families of the victims. “This act of murder is the result of constant incitement against Jews and their state. Slander and lies against the State of Israel continue to be heard on European soil even as the crimes against humanity and acts of murder being perpetrated in our region are systematically ignored. Our response to this hypocrisy is to constantly state the truth, continue a relentless fight against terrorism and build up our strength,” the Prime Minister said.

Foreign Minister Avigdor Liberman blamed anti-Semitic and anti-Israeli incitement for inspiring the attack. Those who call for a boycott against Israel and those who act against Israel in international forums have contributed to this incitement, Liberman said.

“Recent anti-Semitic incidents in Kansas, Toulouse, and this evening in Brussels, should be a flashing warning signal to all those who cooperate with such incitement by rushing rushing to condemn Israel and by comparing building a home for a Jewish family in the land of Israel with the cruel and murderous terrorist activity of anti-Semites,” Liberman said

The Anti-Defamation League (ADL) also condemned the deadly attack, saying they were “horrified and deeply saddened” by the event.

Abraham H. Foxman, ADL National Director, said that “while violence against Jews in Belgium is extremely rare, the attack on the Brussels Jewish Museum is another tragic reminder of the frightening atmosphere for Jews in parts of Europe.”

Four people were killed at a Jewish museum in Belgium on Saturday in an attack that European Jewish leaders are already comparing to 2012’s massacre at the Ozar HaTorah school in Toulouse, France.

The attack, which took place at the Jewish Museum in central Brussels on Saturday, is being approached as racially motivated by Belgian authorities, who posited that it was motivated by anti-Semitism.

Belgium’s interior minister, Joëlle Milquet, was quoted saying by the RTBF Belgian television station that anti-Semitic motives could be behind the attack.

“It’s a shooting … at the Jewish Museum,” she was quoted saying. “All of this can lead to suspicions of an act of anti-Semitism.”

Brussels Mayor Yvan Mayeur told the BBC that the shooting was likely a terror attack and that the choice of location “isn’t a coincidence.”

About half of Belgium’s 42,000-strong Jewish community lives in Brussels.

A spokesman for the Brussels fire brigade said the shooter drove up to the museum, went inside and fired shots.

“According to the information we have at the moment, it was a solitary shooter and it seems to have happened inside the museum,” Pierre Meys, Brussels fire brigade spokesman, told French channel BFM TV.

Security around all Jewish institutions in the country has been raised to the highest level, and Prime Minister Elio Di Rupo was meeting with police and senior officials to discuss the situation.

According to the European Jewish Congress, a crisis center organized by the Consistoire Central and the Coordinating Committee of Belgian Jewish Organizations (CCOJB) along with other communal leaders has opened and is in contact with local and national authorities.

Speaking with the Jerusalem Post, Consistoire head Baron Julien Klener said that he had met with the Prime Minister Elio Di Rupo and other senior officials and that authorities are “trying to find the suspects.”

Maurice Sosnowski, president of the CCOJB, compared the incident to the 2012 shooting of four Jews in a school in France by an Qaeda-inspired gunman, Mohamed Merah.

“This really reminds of what you experienced in France with Mr. Merah attacking a Jewish school,” he was quoted saying by BFM TV. “This is appalling. I would never have imagined something like that happening in Brussels.”

He said no threats have been issued to the Jewish community.

European and international Jewish organizations were quick to compare the two assaults.

“Two years after Toulouse, and on the eve of the European elections, this despicable attack is yet another terrible reminder of the kind of threats Europe’s Jews are currently facing,” World Jewish Congress President Ronald Lauder said in a statement shortly after the shooting. The attack was “clearly was targeted at Jews.”

“Tomorrow, we must all work together to ensure that this doesn’t happen again. If that means to improve security at Jewish sites in Europe, we have no choice. It must be done. If not, more people may be able to carry out such terrible crimes,” he added.

According to EJC President Dr. Moshe Kantor, while details of the attack are still lacking, it is clear that it is indicative of a “permanent threat to Jewish targets in Belgium and across the whole of Europe.”

“This is once again, much like the savage murders in Toulouse, a clear example of where hate and anti-Semitism leads. European government must send out a clear message of zero tolerance towards any manifestation of anti-Semitism.”

Kantor recently made waves by stating that without a significant reduction in the fear and insecurity plaguing European Jewry, normative Jewish life on the continent is “unsustainable.”

“Incidents such as this do not occur in a vacuum, and are the direct result of a systematic culture of hate and anti-Semitism against the Jewish community and the State of Israel in so many parts of Europe, including Belgium,” the Israeli Jewish Congress asserted.

A spokesman for the organization pointed out that according to a recent Anti-Defamation League Study, 27 percent of Belgians harbor anti-Semitic sentiments.

According to the ADL, Belgium comes in as the sixty third most anti-Semitic country out of one hundred territories polled around the world.

The shooting comes less than a day before polls open across Europe for elections to the European Union Parliament, with parties on the hard right expected to gain a significant plurality, though far from a majority, of mandates.