Netanyahu: Brussels Attack At Jewish Museum ‘Is The Result Of Constant Incitement Against Jews And Their State’ 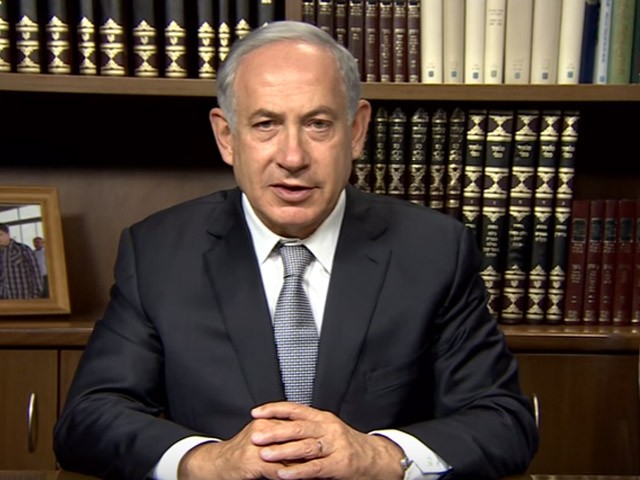 Two women and one man died in the Brussels shooting, a third person is in hospital. They were hit by bullets in the throat and face. No further details were given by the prosecutor’s office.

Israeli Prime Minister Benjamin Netanyahu said the attack against the Jewish Museum in the center of Brussels Saturday afternoon that killed three people and critically wounded a fourth ‘’is the result of constant incitement against Jews and their state.’’

‘’Slander and lies against the State of Israel continue to be heard on European soil even as the crimes against humanity and acts of murder being perpetrated in our region are systematically ignored,’’ he said.

‘’Our response to this hypocrisy is to constantly state the truth, continue a relentless fight against terrorism and build up our strength,” the Prime Minister said.

He said in a statement: “Throughout history, anti-Semitism has taken on many forms but at bottom has always been based hatred of Jews merely for being Jews, whoever they may be and wherever they live… That’s why activity termed ‘pro-Palestinian,’ activity that once again, just like in those dark days, calls for the boycott of ‘Jewish goods,’ and aggressively targets the only democracy in the Middle East, is nothing but anti-Semitic.”

He said the the attack in Brussels, as well as previous attacks on Jewish targets in Toulouse, France, and in Kansas City, “are a large, blinking warning light to all those who, consciously or not, collaborate with this incitement when they are so quick to condemn Israel, time and time again, and compare the construction of a house for a Jewish family in our ancestral land to murderous and cruel terror attacks carried out by villainous anti-Semites and terrorists, whether in Gaza or in Brussels.”

Two women and one man died in the Brussels shooting, a third person is in hospital. They were hit by bullets in the throat and face. No further details were given by the prosecutor’s office.

The attack happened when an Audi had parked outside the museum, and that both a passenger and the driver had gotten out.

The driver placed two bags on the ground and then opened fire on bystanders before driving off.

A person wearing a backpack was seen opening fire before fleeing.

Asked whether she believed it was an anti-Semitic attack, Belgian Interior Minister Joelle Milquet said it was too early to say with a police and judicial inquiry just underway, but that given the target “there are strong grounds for presuming so.”

A spokeswoman for the public prosecutor’s office, Ine Van Wymersch, said police had detained and were interrogating a “suspect” who admitted to having been on the scene at the time of the attack but denied all responsibility. An inquiry had been opened for “murder with premeditation,” she said.

Van Wymersch said that after talking to eye-witnesses, police believed two men were involved, one who left the scene at the wheel of a car and was in police custody and one who escaped on foot and who had not yet been identified.

Detectives were working on camera footage in and outside the museum for further leads.

“This is an odious attack,” said premier Di Rupo. “Everything is being done to identify and arrest its author or authors.”

Joel Rubinfeld, who heads the Belgian League Against Anti-Semitism, told Agence France Presse it clearly “is a terrorist act” after two men were seen driving up and double-parking outside the museum.

One opened fire, allegedly shooting indiscriminately in the entrance hall and further inside before getting away.

The area around the museum – located in the Sablon area of the center of Brussels – was closed off and security beefed up to maximum level across the country in places associated with the Jewish community in Belgium, Minister Milquet said.

At the scene shortly after the shooting was Belgian Foreign Minister Didier Reynders, said two of the victims had been shot inside the museum. ‘’I hope we will identify those responsible very quickly,” he said.

Reynders said he had been nearby when he saw people fleeing and heard shots and rushed to help. When he saw “bodies on the ground in pools of blood” he called the 112 emergency number and rounded up eye-witnesses to assist the police.

“I am shocked by the murders committed at the Jewish museum, I am thinking of the victims I saw there and their families,” Reynders said.

The attack comes on the eve of elections in Belgium for a new federal government as well as for its regional parliaments and the European Parliament.

It was the first fatal attack on a Jewish institution since the early 1980s in Belgium, home to some 40,000 Jews, roughly half of them living in Brussels and the remainder in Antwerpen.

In 1982, a gunman opened fire at the entrance of the Great synagogue of Brussels, located nearby the Jewish Museum, wounding four people, two with serious injuries.

As a result of Saturday’s attack, a crisis cell has been formed by the Jewish Consistory and CCOJB, the umbrella group of Jewish organisations.

‘’The leaders, in permanent and close coordination with police, judiciary and medical authorities, are taking all necessary measures to assure the physical and psychological integrity of the members of the community,’’ says a CCOJB statement.

A cell for psychological assistance has also been set up.

The Anti-Defamation League (ADL) said it was “horrified and deeply saddened” by the deadly attack targeting the Jewish Museum, urging Belgian authorities to quickly bring to justice those responsible for perpetrating the attack.

In a statement, Abraham H. Foxman, ADL’s National Director,said : ‘’While violence against Jews in Belgium is extremely rare, the attack on the Brussels Jewish Museum is another tragic reminder of the frightening atmosphere for Jews in parts of Europe. We know that while the overall number of recorded anti-Semitic attacks in parts of Europe where reliable statistics are available may have gone down in the past year, at the same time the number of violent incidents against Jews has actually increased.”

He added : ‘’The rise in Europe of openly anti-Semitic political parties, the proliferation of clearly anti-Semitic expressions on social media platforms and the disturbingly high levels of anti-Semitic attitudes in many places in Europe contribute to a witches’ brew of hate in which those who are inclined to engage in violence against Jews can find encouragement.’’

A recent worlwide survey by ADL on anti-Semitic attitudes in 102 countries, found that 27 percent of the adult population of Belgium harbors strongly held anti-Semitic views.

“The EJC has been warning for over two years, since the murderous terror attack at the Jewish school in Toulouse, that such acts will continue if no additional resources are put into place to guarantee the security of our communities, to share intelligence and law enforcement cooperation and tougher punishments,” Kantor said.

“It is unacceptable that this situation, based around the importation of the Middle East conflict, or any other anti-Semitic motivation, is brought onto the streets of Europe with deadly results at the heart of our communities,” he added.

“How many more deadly attacks at Jewish institutions does our community need to endure until European governments get serious with a climate of increasing hate towards Jews? ” Kantor continued.

He said ”the time for words and platitudes is over. We demand that our communities are protected. It is our basic right as European citizens to go about our daily lives in full security.”

World Jewish Congress (WJC) President Ronald S.Lauder called said that while the identity of the victims has not been revealed yet, this attack was “a heinous act of terror that clearly was targeted at Jews.”

‘’Two years after Toulouse, and on the eve of the European elections, this despicable attack is yet another terrible reminder of the kind of threats Europe’s Jews are currently facing. It is therefore of critical importance that the authorities in Belgium do everything to bring the perpetrators to justice as fast as possible, and that they ensure that in the future adequate protection is given to sensitive sites,” Lauder declared,’’ Lauder said.

The international Jewish community, he sai, expected that ‘’everything will be done in Belgium and Europe to prevent further such attacks from happening,’’ and urged European leaders to deal with this issue ‘’as a matter of priority’’ in the coming weeks.

“Today, the entire Jewish world mourns the innocent victims who lost their lives in this horrible attack. Tomorrow, we must all work together to ensure that this doesn’t happen again. If that means to improve security at Jewish sites in Europe, we have no choice. It must be done. If not, more people may be able to carry out such terrible crimes,” the WJC president stated.

French President Francois Hollande condemned the “horrifying killings with the greatest force.” In a statement, he expressed France’s solidarity with neighboring Belgium and condolences to the families of victims.