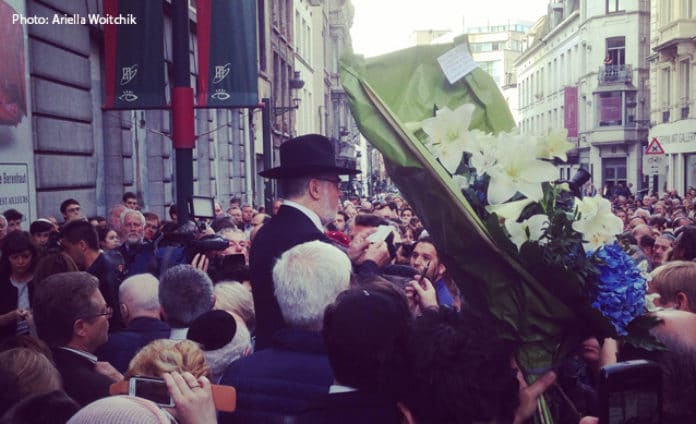 Earlier in the day, accompanied at the meeting by Dr. Maurice Sosnowski, president of the Coordinating Committee of Belgian Jewish Organisations and Baron Julien Klener, President of the Central Jewish Consistory of Belgium, Kantor held a meeting with Minister of the Interior Joelle Milquet.

Kantor also convened heads of the Jewish security apparatus and senior community leaders and visited the EJC Security and Crisis Center (SACC) which immediately went into action following the attack. SACC trains and prepares Jewish communities to handle crisis and security management by coordinating all the various arms of the community – leadership, security, medical and psychological in crisis management teams.

He described the attack as “horrific but not surprising” while expressing condolences to the families of the victims.

“Attacks on Jewish targets in Europe do not exist in a vacuum, but are part and parcel of an overall climate of hate and incitement against Jewish communities,” Kantor said. “Anti-Semitism begins in the public domain, it gains international legitimacy and becomes normative even in our national parliaments but it always ends in killing Jews.”

“The time for laissez-faire attitudes by European governments to the scourge of extremism and hate is over.”

“After the horrific attack in Toulouse in 2012 at the Jewish school, we demanded and expected legislation to be implemented against the inciters of hate, proper prioritisation of resources into intelligence and security coordination and a massive increase in security at Jewish community installations,” Kantor added.

“The lesson of these European elections – a detachment between the will of the citizens and the lack of implementation by governments – has never been more sharply felt on this issue as the protection of our communities. The time has come for all European governments to implement not talk, legislate not prevaricate and protect their citizens.”