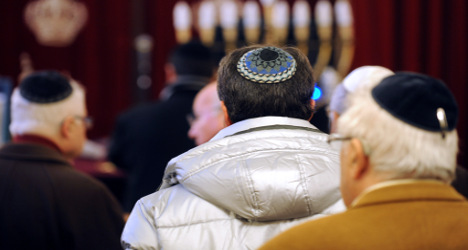 Hours after four people, including a French woman, were gunned down at a Jewish museum in Brussels by a killer who remains on the loose, two brothers were targeted in an apparent anti-Semitic beating near Paris

Two brothers were heading to synagogue on Saturday night in Créteil, in suburban Paris, when two men unleashed a vicious, unprovoked beating on them.

As the brothers, 19 and 21 years old, walked around 8:30pm they were attacked from behind by two North African for no apparent reason, save for hatred. One of the brothers said he was certain the attack was motivated by anti-Semetism.

“They were saying to each other, ‘hit harder!’ They didn’t even talk to us,” the unnamed victim told Europe 1 radio of the attackers. “That was when we realized it was an anti-Semitic act. It was solely because we are Jews and we wore Kippot (yarmulkes). The Jews of France should beware.”

One of the attackers wielded a knuckleduster (brass knuckles) and the other used his firsts in the assault that sent the older brother to the hospital for his injuries.

Just hours before, on Saturday afternoon, four people were shot to death at the Jewish Museum of Belgium in Brussels. The shooter, carrying a Kalashnikov rifle, walked calmly into the museum and opened fire in the reception area.

An Israeli couple in their 50s and a French woman were killed almost instantly in the shooting. Moments later the gunman escaped on foot and remains at large. A person detained in connection with the violence is no longer considered a suspect.

“Two years after the savage killings in Toulouse, here is another example of what hate and anti-Semitism can bring,” the European Jewish Congress wrote in a statement.

Though France is the home of third largest Jewish population in the world it has been accused of being anti-Semitic. A recent poll found that one in three French people harbor anti-Jewish beliefs, though prominent Jewish experts argued the study had exaggerated the problem.