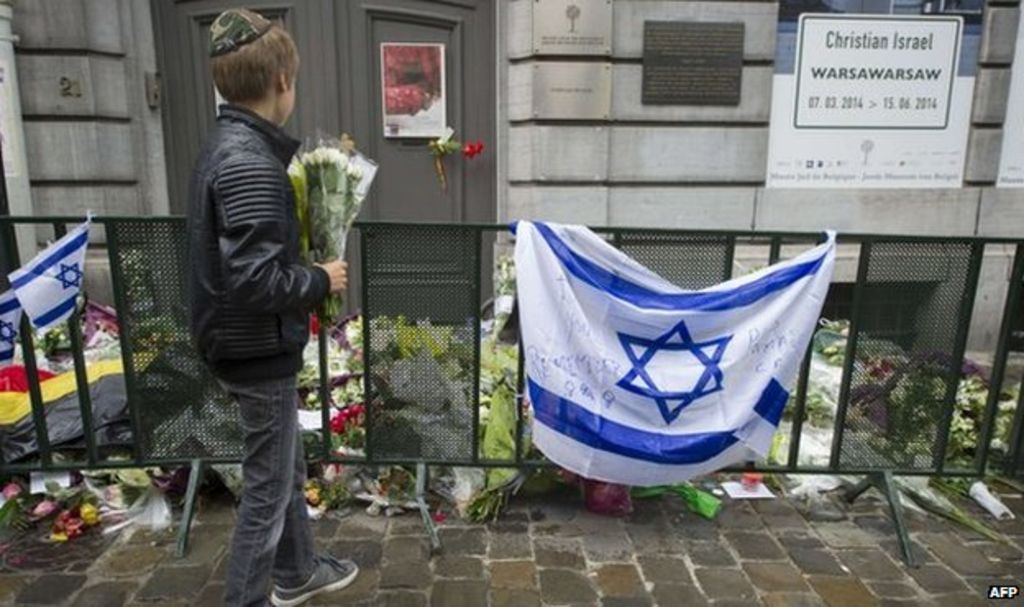 Gunman, who used Kalashnikov to fire two rounds into a room, killed four people and remains at large days after attack

A fourth person has died following an attack in the Jewish Museum of Brussels, with the perpetrator of Saturday’s attack remaining at large.

Belgian officials released a video clip on Monday from the museum’s security cameras.

It shows a man entering the building, taking a Kalashnikov rifle out of a bag and firing two rounds into a room before walking out. The attacker left the crime scene on foot.

“The priority of priorities is to find this man. He must be arrested and stopped,” Joelle Milquet, home affairs minister, said.

“We must reassure members of the Jewish community.”

She has ordered round-the-clock police protection at all of Belgium’s synagogues, schools and cultural centres.

Two of the four victims were Israeli tourists from Tel Aviv. The other two were museum staff – a French woman and a Belgian man.

All four died from bullet wounds to the face and neck, the AFP news agency reported.

Ine Van Wymersch, deputy prosecutor, said on Sunday he could not confirm whether the shooting was a “terrorist or anti-Semitic act”.

Israel’s foreign minister and prime minister condemned the shooting, saying it was the result of “anti-Israeli and anti-Semitic incitement”.

The European Jewish Congress called for greater security at Jewish institutions and tougher legislation in dealing with anti-Semitic crime.

It has launched a crisis management centre to deal with the aftermath of the shooting.

In a statement issued on Sunday, Moshe Kantor, ECJ president, said: “Such acts will continue if no additional resources are put into place to guarantee the security of our communities, to share intelligence and law enforcement cooperation and tougher punishments.

“How many more deadly attacks at Jewish institutions does our community need to endure until European governments get serious with a climate of increasing hate towards Jews?”

Bernard Cazeneuve, French interior minister, said on Sunday that two Jewish men were attacked as they left a synagogue in Creteil, southeast of Paris, on Saturday night.

He ordered more security around Jewish and Israeli establishments.