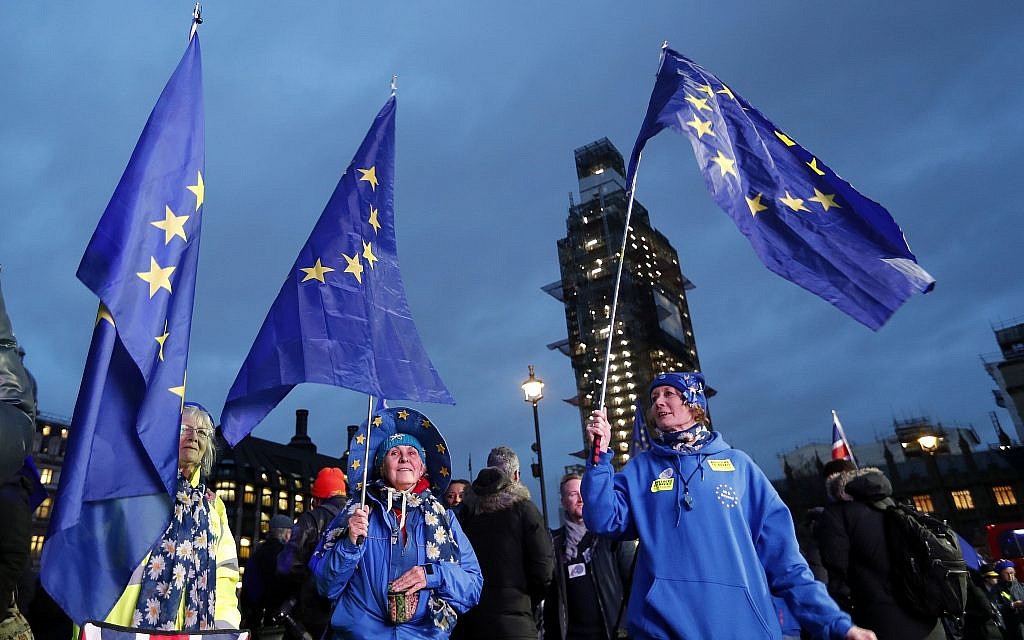 Several Jewish groups have expressed concern over the results of Sunday’s European elections which showed a significant surge in support for extreme-right and populist parties, fearing that that hate speech will now feature more prominently in European politics.

Following the vote in the 28 EU countries, of the 751 seats in the new European Parliament, the center-right European People’s Party (EPP) won 214, followed by the center-left Socialists and Democrats (S&D) with 189, while the extreme-right parties surged to win a combined 36 seats, giving them enough weight to influence debate and decision making in the EU body.

EU leaders were due to meet Tuesday evening in Brussels for an ”informal” dinner, their first meeting after four days of balloting in the 28 countries.

The “alarming” results came on the heels of the deadly attack at the Brussels Jewish Museum, in which four people were killed by an unidentified gunman in an attack authorities have described as ‘’terrorist.’’ Another attack took place hours later in France when two Jewish brothers wearing kippahs were assaulted outside a synagogue near Paris.

The Anti-Defamation League (ADL) voiced concern over the “alarming” success of extremist, including neo-Nazi, parties in the elections.

“There is no doubt that political extremism is on the rise in Europe, and along with it anti-Semitism is rising as well,” said ADL National Director Abraham Foxman.

“The success of extremist political parties, both on the far-right and far-left, has never been good for democracy or for Jews and other minorities. The continuing trend in Europe toward support for these parties is cause for heightened concern.”

“The atmosphere for Jews in Europe is deteriorating,” said Foxman. “The murderous attacks in Brussels this past weekend and two years ago in Toulouse, and the rising number of assaults on Jews, such the attack in Paris on Saturday, are stark examples of the very real dangers facing Jews.”

“The alarming electoral successes of the extremists will only contribute to increasing that sense of insecurity,” Foxman added. “If Jewish life in Europe is to continue and thrive, it will require a serious commitment from all European governments and EU institutions to turn the tide. The choice is theirs and the time is now.”

CRIF, the umbrella group for French Jewish organizations, said in a statement that it is deeply concerned about the results of the elections, especially the fact that the National Front party topped the poll.

The group called on the French government to “take strong measures against those who spread anti-Semitic and racist speech to strongly condemn their barbaric acts, and intervene in schools.

“History has taught us that economic crises promote nationalism and isolationism, which are accompanied by the rejection of the other, racist, xenophobic and anti-Semitic sentiments,” the CRIF said.

“Moreover, the bombing of Brussels that killed four people on Saturday, and the anti-Semitic attack against two young people in Creteil, showed that hatred rose again, from the stage of speech to physical aggression.”

For the World Jewish Congress (WJC), the surge of extreme-right and anti-Semitic parties in a number of countries is a ‘’shock and a reason for great worry.’’

‘’European leaders must address this problem urgently and come up with a strategy to fight extremism. The future of European Jewry is a stake if these forces are not reined in,’’ said WJC President Ronald S.Lauder.

‘’Extremists must not be allowed to set the agenda in Europe,” he said, urging European governments to enter into a constructive dialogue with the WJC on this issue.

According to European Jewish Congress President Moshe Kantor, “The alarming success of extremist parties in these elections is the result of the passivity of European leaders and governments to deal with real issues facing European citizens.”

He spoke after meeting in Brussels with Belgian Prime Minister Elie Di Rupo in the aftermath of the Brussels terror shooting.

“What better example is there of the lack of security, the absence of tolerance and the climate of fear in our European cities than this attack on Jews in the capital of Europe?” Kantor said.

“We demand from the governments in Europe that each country will create an official ministry – under the supervision of the Prime Minister – that will take the lead to fight against anti-Semitism,” he said.

Daniel Schwammenthal, Director of the American Jewish Committee Transatlantic Institute, said, “These radical parties have been able to grow in their respective home countries for quite some time and are now cementing their presence also at the European level.”

“They must be confronted head-on or the danger will only continue to grow,” he added, stressing that their “presence in the legislature for the next five years will, at a minimum, provide a soapbox from which to propagate their vile hatred.”