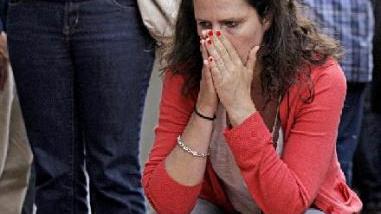 “We are in a state of war. The terrorist is still at large. When you see the video images of the shooter, it’s really frightening because he might act again,’’ said Brigitte Weberman, a consultant who works for a local Jewish radio station.

“I am worried for my children who go to a Jewish school and youth movements. When I take them to school, I am scared. When my daughter tells me that she goes out with friends, I am scared. I asked my children not to wear a Magen David,’’ she added.

Mrs Weberman learned about the attack through her husband, who works in the same street as the museum. “He heard gunshots and called me,” she said.

There has been widespread consternation at the apparent lack of door security at the museum, given the high levels of antisemitism prevalent in Belgian society.

“It is a Jewish museum and unfortunately, where there is the word ‘Jewish’, we are targeted. We are more targeted than any other community,’’ said Steve Grunwald, a company manager in Brussels.

The director of the museum reportedly did not establish special security measures because he wanted to make the building an ‘open cultural institution’. This will certainly change after the museum reopens next week.

Joel Rubinfeld, president of the Belgian League against Antisemitism, has long warned of the consequences of widespread antisemitism in Belgium.

“There is a poisonous atmosphere for Jews.” he said. “After Operation Cast Lead you saw the climax in Jew-hate. On 11 January 2009, there was a major protest in Brussels with 50-80,000 people, including political leaders. You could hear slogans such as ‘death to Jews’. People were holding posters saying ‘the Holocaust never existed’ and ‘Zion elders’ protocols – final phase.’”

Mr Rubinfeld added that Belgian politicians had been ‘lax’ in tackling the problem.

This month, Belgian MP Laurent Louis organised a pan-European “summit meeting for antisemities” in Brussels, which drew 500 people. Due to be attended by notorious Jew-haters Dieudonné and Alain Soral, it did take place while its legality was discussed in the courts.

Since the attack last Saturday afternoon, security at Jewish sites, especially schools and synagogues, has been reinforced.

During the attack, the male gunman was seen getting out of a car close to the museum, one kilometre from the European Union’s council buildings in the Belgian capital. Carrying a backpack, he approached the building and opened fire, hitting the four victims before fleeing in an Audi.

Police later arrested a man in the city and questioned him, but he was released and was being regarded as a witness rather than a suspect.

CCTV footage from the museum was released the following day, showing the attacker wearing a dark cap, sunglasses and a blue jacket. He was seen entering the building, taking a Kalashnikov rifle from a bag and calmly shooting before running from the area.

Two of the victims, Emanuel and Miriam Riva, were Israeli tourists visiting Belgium to celebrate their 18th wedding anniversary. Their bodies were flown home on Sunday evening and buried on Monday.

In a letter released to Israeli media, the couple’s teenage daughters, Shira and Ayelet, wrote: “We couldn’t ask for better parents. Loving, caring and good-hearted, who most of all wanted the best for us.”

A museum volunteer receptionist and a French woman – both Jewish – were understood to be the two other victims. The four who were killed were all shot in the head and neck – raising suspicions that the shooter was highly trained.

The museum, in the Sablon district of central Brussels, is not run by the local Jewish community, so it opens on Shabbat, hence the number of visitors present at the time of the attack.

Politicians and community leaders expressed their shock over the attack.

Prime Minister David Cameron wrote to his Belgian counterpart Elio Di Rupo pledging to “work with you to confront such bigotry across Europe”.

Pope Francis condemned the killings during his tour of Israel and spoke of his “profound sadness”.

A number of rabbis based in Europe spoke of their concern of rising antisemitism on the continent and the growth in support for far-right political parties and groups.

Moshe Kantor, president of the European Jewish Congress, called on European governments to enact tougher legislation against antisemitism and to increase security at Jewish institutions. He met Mr Di Rupo on Sunday to discuss his concerns.

In a statement, Dr Kantor said: “The EJC has been warning for over two years, since the murderous terror attack at the Jewish school in Toulouse, that such acts will continue if no additional resources are put into place to guarantee the security of our communities. We demand that our communities are protected.”

The World Jewish Congress described the attack as “a heinous act of terror that clearly was targeted at Jews”.

At the entrance of the museum, located in a touristic area of Brussels, people continue to lay flowers and light memorial candles to honour the victims.

Monica, a young girl born in Sweden to Jewish Polish parents, was in the crowd. ‘’I am very sad and shocked. But like many people here this didn’t came to me as a surprise at all because of the bad anti-Jewish climate.’’

One of the bouquets of flowers had a card with the following words: “You shall not kill. The Bible, The Koran, The Torah.’’