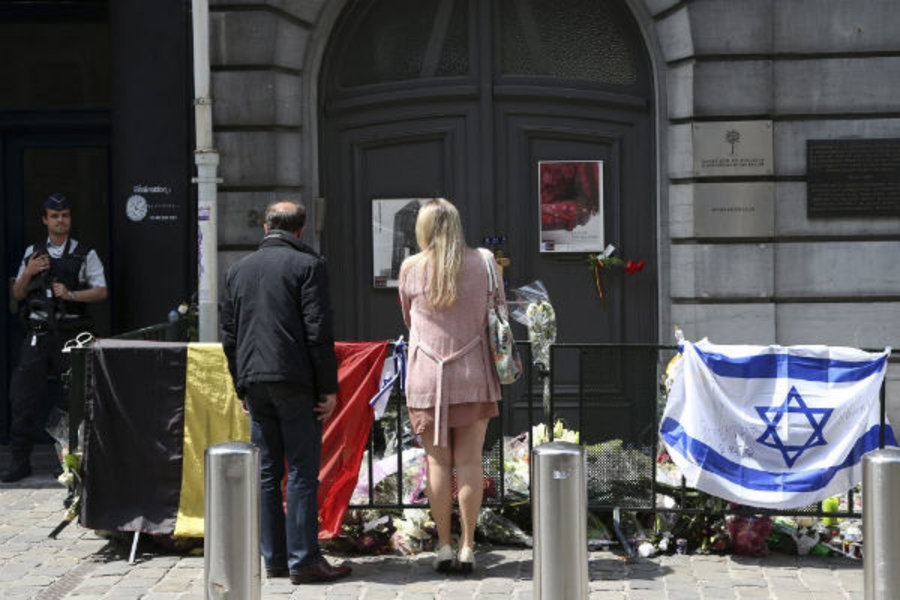 Jewish museum shooting arrest: French police named a suspect believed to have ties to Syrian jihadists in the May 24 shooting at the Jewish Museum in Brussels, Sunday, renewing concerns about spillover of violence from Syria into Europe.

French police have arrested a 29-year-old man suspected of involvement in the shooting deaths last weekend of three people at the Jewish Museum in Brussels, an attack that stoked fears of growing anti-Semitic violence in Europe.

Mehdi Nemmouche, a French citizen, was detained in the southern French city of Marseille on Friday and had a Kalashnikov assault rifle and another gun with him, a French police source said on Sunday. Nemmouche is from the northern city of Roubaix and spent time in jail in 2012, the source said.

French media reported that he was suspected of having stayed in Syria with Islamist jihadist groups last year. Islamist insurgents are playing a major part in a three-year-old uprising against Syrian President Bashar al-Assad.

If confirmed, the Syria connection would deepen concerns among European governments about citizens, often with Islamic immigrant backgrounds, going to fight in Syria and bringing back political and sectarian violence to Europe on their return.

An Israeli couple and a French woman were killed on May 24 when a man entered the Jewish Museum in busy central Brussels and opened fire with a Kalashnikov. A Belgian man remains in critical condition in hospital.

French investigators have found a memory stick containing a video in which the suspect was shown carrying a weapon and claiming he used it for the May 24 shooting, RTL radio reported, without naming its sources.

French President Francois Hollande confirmed a suspect had been arrested and said France was determined to do all it could to stop radicalized youths from carrying out attacks.

France announced new policies in April to stop citizens joining the Syrian civil war, aiming to prevent young French Muslims becoming radicalized and posing a threat to their home country. This is a growing worry in a country that is home to Europe’s largest Muslim and Jewish communities.

France, which has been a staunch opponent of Assad, estimates the number of its nationals directly or indirectly involved in the Syrian conflict at about 700, of which a third are fighting against the Damascus government.

French media said Nemmouche was arrested as part of random, drug-related checks atMarseille’s bus terminal. Local media also reported that he had in his bag press clippings about the Brussels Jewish museum shooting.

Soulifa Badaoui, who worked as a lawyer for the suspect in the past, told BFM TV Nemmouche was not religious at the time. Asked what role religion played for him then, she said: “None, this was absolutely not part of his personality, he was not observant at all.”

The Belgian federal prosecutor’s office confirmed that a suspect had been arrested and said more details would be given at a news conference at 3 p.m. (1300 GMT).

Belgian federal magistrate Erik Van der Sypt told Reuters that a Belgian judge had issued a European arrest warrant and Belgium would seek the extradition of the suspect from France.

Last weekend’s attack occurred on the eve of parliamentary and European elections inBelgium.

Police released a 30-second video clip from the museum’s security cameras showing a man wearing a dark cap, sunglasses and blue jacket enter the building, take a rifle out of a bag and shoot into a room before calmly walking out.

European Jewish Congress President Moshe Kantor praised French and Belgian authorities for the arrest, saying there was a need to clamp down on the spread of hate crimes, especially by those hardened by bloodshed in places like Syria.

“…For too long authorities in Europe have acted speedily after the fact. It is now time for all to turn attention and set as the highest priority the prevention of these vicious crimes,” he said in a statement.

Jewish community officials have drawn parallels between the Brussels shooting and the 2012 killing of four Jews at a school in France by an al Qaeda-inspired gunman, Mohamed Merah.

Security around all Jewish institutions in Belgium was raised to the highest level after theshooting, and French authorities also stepped up security after two Jews were attacked the same day as they left a synagogue in a Paris suburb wearing traditional Jewish clothing.

About half of Belgium’s 42,000-strong Jewish community lives in Brussels. At some 550,000, France’s Jewish community is the largest in Europe, though violence such as the 2012 school murders and France’s stagnating economy have prompted an increase in emigration to Israel or elsewhere.