Marine Le Pen Should Strip Her Father Of His Post 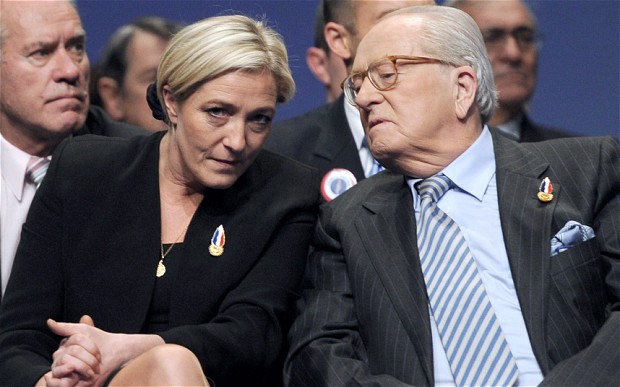 Anti-racism campaigners reacted with outrage on Sunday to an apparent anti-Semitic pun by France’s former far-right leader Jean-Marie Le Pen that even his own party and daughter were quick to criticize.

SOS Racisme denounced as “the most anti-Semitic filth” a pledge by the founder of the National Front (FN) party to put his critics in their place using a pun suggesting Nazi gas chambers.

The remark was contained in a video clip posted on the FN website and since removed.

In the video, Le Pen railed against a number of critics including pop star Madonna and Yannick Noah, the French singer and former tennis champion.

When asked about another one — French singer Patrick Bruel, who is Jewish — Le Pen said he would be part of “a batch we will get next time,” using the word “fournee” for “batch”, evoking the word “four”, which means “oven”.

SOS Racisme said it would file a complaint “in the coming days” against Le Pen, whose daughter Marine took over as FN leader in 2011.

She has sought to rid the party of its reputation for racism and anti-Semitism in recent years, and members were quick to distance themselves from the founder’s comment.

FN vice president Louis Aliot, who is also Marine’s boyfriend, criticized it as “a bad phrase. It is politically stupid and dismaying.”

Another FN lawmaker, Gilbert Collard, said it was time for the party founder to “take his retirement”.

But the 85-year-old Le Pen reacted by saying: “If there are people in my camp that have interpreted it in this way, they are nothing but imbeciles.”

He denied any anti-Semitic overtones in the remark.

“The word ‘fournee’ that I used obviously has no anti-Semitic connotation, except for political enemies or idiots,” he said.

His daughter gave a guarded response saying that her father had made a “political error” but that the “meaning given to his comments is a malicious interpretation.”

Leaders of the World Jewish Congress condemned Le Pen’s remarks and called for him to be stripped of his honorary NF presidency.

“For the umpteenth time, Mr. Le Pen has made unacceptable, sickening statements with respect to the Holocaust,” said WJC President Ronald S. Lauder. “Clearly, he is an unrepentant anti-Semite who is poisoning French politics, and frankly, a mild rebuke by Marine Le Pen is not good enough. If she wants to show that her party has changed under her leadership, she must strip her father of his post of honorary FN president and make sure he leaves the political scene for good.”

WJC Vice-President Roger Cukierman, the head of the French Jewish umbrella organization CRIF, declared: “We are shocked by Jean-Marie Le Pen’s anti-Semitic, provocative statements. The honorary president of the National Front again is displaying his habitual anti-Semitism, for which he has been condemned many times.”

“Le Pen has unmasked the true face of the far-right of Europe days after their electoral successes in the European Parliament,” he said. “While some have tried to whitewash and mainstream these parties, Le Pen’s comments demonstrate that they still stand on foundations of hatred, antisemitism and xenophobia.

“The European Union should fight-back against these far-right and neo-Nazi parties by demonstrating zero tolerance for racial incitement and it can begin by stripping Le Pen of any immunity for prosecution he might hold as an MEP for these comments.”

Another group, the Movement Against Racism and for Friendship Between Peoples, also said it would lodge a complaint, calling Jean-Marie Le Pen “an authentic anti-Semite”.

Le Pen, who has had multiple convictions for inciting racial hatred and denying crimes against humanity, once described Nazi gas chambers as a “detail” of history.

Le Pen has used similar wordplay in the past to make light of gas chambers used by the Nazis in World War II. In 1988, he referred to a Jewish minister named Michel Durafour as “Durafour-crematoire”. In French, the word “four-crematoire” means crematorium.

Jean-Marie Le Pen’s comments come amid growing concern that anti-Semitism is on the rise in Europe.

The Jewish Telegraphic Agency reported this week that two Jewish teenagers had filed a complaint with police after being chased by four men, including one wielding a hatchet, near Paris.

In Bulgaria, four men were arrested after “Death to Jews” and a swastika were painted on the notice board of a synagogue in the city of Sofia on June 4.

On May 24, four people were killed by a gunman who targeted the Jewish Museum in Brussels. Police arrested French Islamist Mehdi Nemmouche on suspicion of murder.