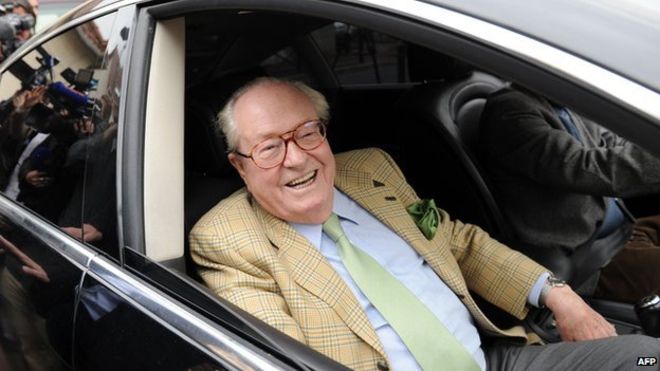 French National Front (FN) leader Marine Le Pen and her father have argued openly over a remark he made, which was condemned as anti-Semitic.

Jean-Marie Le Pen is a veteran Euro MP for the FN, which won the European elections in France last month.

His daughter Marine called his use of the word “fournee” – as in “an oven batch of loaves” – a “political error”.

He told an interviewer that “we’ll make a batch of them next time” – referring to critics including a Jewish singer.

Mr Le Pen was chuckling as he made the comment about Patrick Bruel.

The remark drew much condemnation at the weekend, and the video of the interview has been removed from the nationalist FN’s website.

Critics see his use of “fournee” as a veiled reference to Nazi death camp ovens in which Jews and other victims were cremated.

He was commenting on various celebrities, including Guy Bedos, Madonna and Yannick Noah, who have expressed dismay at the FN’s election victory. The “fournee” comment came when the interviewer reminded him of Mr Bruel, who is also a critic.

Mr Le Pen, who handed leadership of the party to his daughter in 2011, has now hit back. He said on Monday he did not know Bruel was Jewish – rather, that the name sounded “Breton” to him.

He also dismissed his daughter’s criticism, saying “I think the political error is committed by those who adopt a single way of thinking.

“They’d like to resemble the other political parties. If that’s the wish of a certain number of FN leaders, then they’ve succeeded. They’re the ones who’ve made a political error, not me,” he told Radio Monte Carlo.

Mr Le Pen – currently honorary president of the FN – has previous convictions for inciting racial hatred. He was fined 1.2m francs (183,200 euros; £149,000) after calling the Nazi gas chambers “just a detail in the history of World War II” in 1996.

Later he was stripped of his parliamentary immunity as an MEP and fined in Germany for a similar comment judged to have minimised the Holocaust.

In a tweet on Sunday Patrick Bruel said Mr Le Pen “is reoffending – did he have to remind us of his true face and that of the FN?”

And the European Jewish Congress President, Moshe Kantor, urged the EU to strip Mr Le Pen of his parliamentary immunity again and for the French authorities to charge him with incitement.

“Le Pen has unmasked the true face of the far-right of Europe days after their electoral successes in the European Parliament,” said Mr Kantor. “While some have tried to whitewash and mainstream these parties, Le Pen’s comments demonstrate that they still stand on foundations of hatred, anti-Semitism and xenophobia.”

But she said the incident “allows me to reiterate that the National Front most firmly condemns every form of anti-Semitism, whatever form it takes”.

An ally of Ms Le Pen, FN MP Gilbert Collard, suggested that the time may have come for her father to retire from politics.