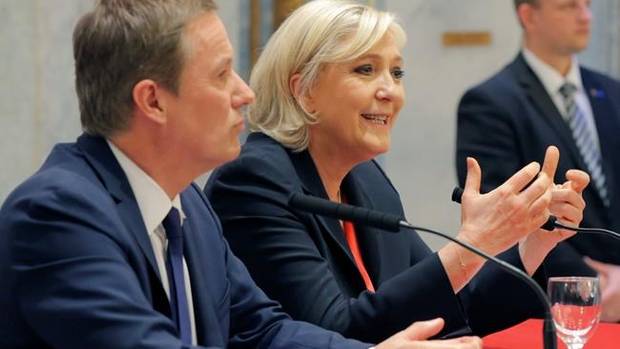 The remark was contained in a video clip posted on the FN website and since removed.

In the video, Le Pen railed against a number of critics including pop star Madonna and Yannick Noah, the French singer and former tennis champion.

When asked about another one – French singer Patrick Bruel, who is Jewish – Le Pen said he would be part of “a batch we will get next time,” using the word “fournee” for “batch”, evoking the word “four” (“oven”).

Jewish groups reacted sharply to Le Pen’s comments. CRIF, the umbrella group of French Jewish organizations condemned the ‘’particularly shocking’’ comments and called on ‘’all democrats in our country to express with th utmost firmness their condemnation of the anti-Semitic, racist and heinous remarks .’’

The French Jewish students’ union (UEJF) said it would sue both Le Pen and his daughter for what it called “this openly anti-Semitic declaration”.

SOS Racisme denounced as “the most anti-Semitic filth” a pledge by the founder of the National Front (FN) party to put his critics in their place using a pun suggesting Nazi gas chambers. The anti-racism group said it would file a complaint “in the coming days” against Le Pen, whose daughter Marine took over as FN leader in 2011.

Another group, the Movement Against Racism and for Friendship Between Peoples, also said it would lodge a complaint, calling Jean-Marie Le Pen “an authentic anti-Semite”.

Le Pen, who has had multiple convictions for inciting racial hatred and denying crimes against humanity, once described Nazi gas chambers as a “detail” of history.

Le Pen has used similar wordplay in the past to make light of gas chambers used by the Nazis in World War II. In 1988, he referred to a Jewish minister named Michel Durafour as “Durafour-crematoire”. In French, the word “four-crematoire” means crematorium.

Under Marine Le Pen, the FN, which came out in first position in recent European elections, is looking to rid itself of a reputation for racism and anti-Semitism in order to broad, triumphed in European Union elections last month, en its appeal.

On Sunday, she rebuked her father. She said for an experienced politician like her father, “not to have foreseen how this phrase would be interpreted is a political mistake the National Front is (now) paying for.”