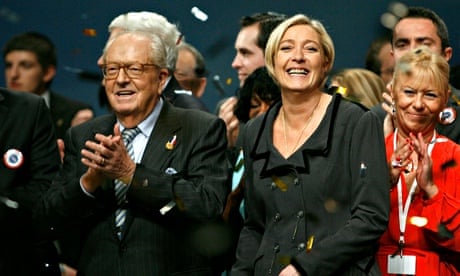 Jean-Marie Le Pen, the founder of France’s far-right Front National and his daughter, Marine, the party’s president are engaged in a public spat over his alleged antisemitic remarks.

Le Pen senior is not in the habit of being told off by members of his own party, that he founded in the 1970s, but has been openly criticised by FN leaders.

The row erupted after he made a video aired on the FN website in which he made a play on the word four (oven) – seen as referring to the Nazi concentration camps – when disparaging a French singer of Jewish origin.

Marine Le Pen, who has worked to present a softer, less xenophobic face of the far-right in France, described the comment as a “political gaffe” and ordered the video to be pulled from the party website.

Le Pen has hit back at his daughter.

“The political gaffe is those who are lining up with the general view. They want to seem like other political parties. If that’s the wish of a certain number of FN leaders, they’ve succeeded. They’re the ones who have made a political gaffe, not me,” he told BFMTV.

Gilbert Collard, an FN member of parliament, stirred the controversy even further by suggesting it was time for Jean-Marie Le Pen to retire.

“Marine is trying to form a group (of far-right Eurosceptics) in the European parliament and he drops this clanger. Frankly, it’s very annoying and it complicates Marine’s job enormously,” he told French radio.

“I ask myself why (he did this) what’s the interest, what does it bring to the debate.”

The European Jewish Congress president Dr Moshe Kantor has called on the European Union to strip Jean-Marie Le Pen of his parliamentary immunity and for the French authorities to charge him with incitement to racial hatred.

“Le Pen has unmasked the true face of the far-right of Europe days after their electoral successes in the European parliament,” Kantor said at the weekend. “While some have tried to whitewash and mainstream these parties, Le Pen’s comments demonstrate that they still stand on foundations of hatred, antisemitism and xenophobia.