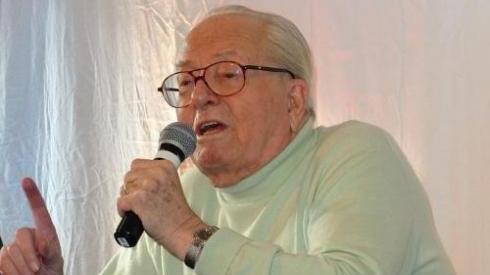 The European Jewish Congress is to sue Jean-Marie Le Pen after the former leader of France’s National Front made a controversial Holocaust-related comment.

Speaking about Jewish singer and actor Patrick Bruel in a NF video, Mr Le Pen played on the French word for oven – believed to be a reference to Shoah concentration camps.

“On fera une fournee la prochaine fois” (next time we’ll make a batch), Mr Le Pen said. The phrase is a play on the word “fournée” or “le four” which translates as oven.

The EJC said the politician’s parliamentary immunity should be removed to allow for his prosecution. Mr Le Pen has a series of convictions for antisemitism and racism.

Moshe Kantor, EJC president said: “It is vital that there are consequences for these comments, which reflect a history of racism and antisemitism by Le Pen which have not received the censure they deserve.

“These comments are incitement against and defamation of the Jewish people and we will take every action to ensure that a message is sent that this is unacceptable discourse.”

French media law includes a category on defamation against ethnic groups. The EJC has hired a lawyer to file a suit against Mr Le Pen, who could face a fine.

“We hope that this lawsuit will send a strong message that there will no longer be immunity for hate and an end to the impunity of incitement against Jews or other ethnic groups among any Europeans, especially by public figures such as politicians.”