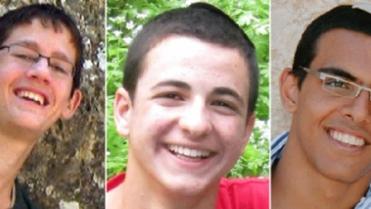 The bodies of yeshivah students Eyal Yifrach, Gilad Shaar and Naftali Frenkel were found near Hebron on Monday. They had been missing since June 12.

Mr Netanyahu said the Palestinian terrorist group was responsible for their deaths. Israel’s security cabinet met on Monday evening but did not make an immediate decision on the country’s response.

The boys will be buried together this afternoon in Modiin and the security cabinet will reconvene after the funerals.

Israeli President Shimon Peres said: “The entire nation is bowing its head with unbearable sorrow. Our war on terrorism will only intensify.”

As speculation mounted over how Israel would respond, there was widespread condemnation of Hamas and questioning of the Palestinian unity government with Fatah.

The European Jewish Congress called on the European Union to cut all support, funding and political contact with the Palestinian Authority until it suspends Hamas from the government.

EJC president Moshe Kantor said: “Once again, the true face of Palestinian terror groups and their callous disregard of human life and targeting of innocent victims displays in full force the daily threats encountered by the state of Israel and all its citizens.”

Conservative Friends of Israel chairman James Clappison MP said: “It is regrettable that the formation of a Hamas-Fatah unity government was welcomed by the British government a few short weeks ago.

“The government must immediately reassess and reconsider its support for Hamas’ presence in a Palestinian unity government.”

Board of Deputies president Vivian Wineman said: “This is a tragic reminder of the very real security threats Israel’s civilians face and we call on the Palestinian Authority to use its full endeavours to ensure that the perpetrators of this shocking crime are brought to justice.”