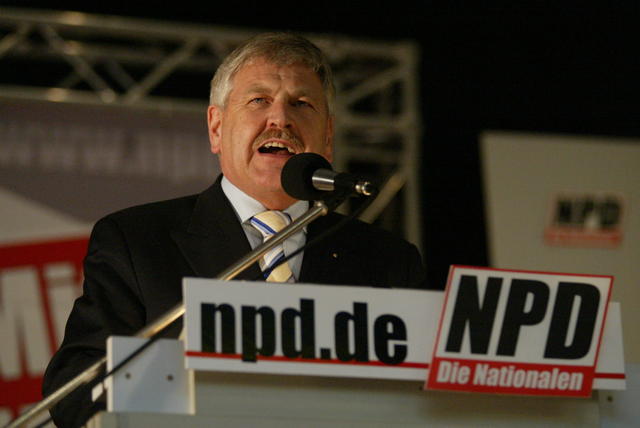 Jewish leaders worldwide have called on the European Union to introduce minimum election thresholds for the European Parliament after a neo-Nazi took a seat on its Civil Liberties Committee.

The call comes after EurActiv’s exclusive story Monday about German MEP Udo Voigt, which sparked furious reactions from outraged Jews in Israel, the US and Europe.

Voigt is a Holocaust denier. He claims no more than 340,000 Jews died in the Holocaust, rather than the six million who were murdered by the Nazis. His Nationaldemokratische Partei Deutschlands (NPD), is classified by German intelligence as a far right extremist party.

A German court ruling prior to May’s elections ended the minimum 3% European election threshold for MEPs. That meant Voigt, with 1% of the vote, was re-elected to the Parliament.

World Jewish Congress CEO Robert Singer urged the EU to make “the necessary statutory changes” to stop extremists being elected to the Parliament at the 2019 elections.

“The threshold percentage for parties entering the European Parliament should be considered just as important as the rules in place in the German Bundestag, where [the threshold] is a minimum of 5%, and most other national parliaments in Europe,” he said.

“The idea of a neo-Nazi as a guardian of European human rights is sickening,” said Stephan Kramer, director of the American Jewish Committee’s European Office on Anti-Semitism.

Kramer, the last Secretary-General of the Central Council of Jews in Germany, also demanded a minimum threshold percentage for all parties entering the European Parliament.

He told the Jerusalem Post, “A person whose ideology is racism, xenophobia, Islamophobia and anti-Semitism, a dyed-in-the-wool enemy of democracy and freedom simply should not hold a seat on this committee – as he should not be a member of a democratic parliament at all.”

A request for comment from European President Martin Schulz on the calls for changes to EU electoral law was refused but he earlier told EurActiv any Holocaust denier had no place in the Parliament.

Dr Moshe Kantor, president of the Brussels-based European Jewish Congress, said Europe had not listened to Jewish calls to ban the Voigt’s party, the NDP. There was a failed attempt to ban the party in 2003. Another attempt, arguing its ideology is identical to Hitler’s, is currently in the German courts.

“It is surreal and the ultimate insult to the Jews of Europe and to the European Union itself, Kantor said, “We now see the results affecting the whole of Europe by this refusal to take action against hate, racist incitement and Holocaust denial.”

He urged lawmakers “to refuse to allow this man to participate in the workings of the committee”.

The controversy erupted amid fears of increased European anti-Semitism. In May, four people were shot dead at Brussels’ Jewish Museum. A French suspect has since been arrested.

Far right parties, such as France’s National Front made gains in the European elections. Some of those parties, led by Marine Le Pen’s party, tried but ultimately failed to form a group in the European Parliament.

The group would have qualified for extra funding, potential chairs and vice-chairs on committees and more speaking time. Front National MEPs have claimed it could still be formed.

“The situation in Europe and in France – especially I can say in France – is very much in tension,” Dr Kantor said.

There was another attack on a Jewish school in Toulouse, France in 2012. French Jews are emigrating to Israel in record numbers because of fears of rising anti-Semitism from the far right and extremist Islam.

The Simon Wiesenthal Center’s senior Nazi hunter Efraim Zuroff told the Jerusalem Post that Voigt’s position on the committee was like “appointing a Ku Klux Klan Dragon to a committee to ensure the civil liberties of Afro-Americans.”

The centre is an influential global Jewish human rights organisation that confronts anti-Semitism and preserves the memory of the Holocaust.

Zuroff added, “One would imagine that Voigt’s public statements in praise of Hitler and the Waffen-SS and his denial of the Shoa [Holocaust] would have been sufficient to bar his entry to a committee whose primary purpose is the defence of justice and civil rights, but obviously that is not the case in contemporary Europe.”

Israel’s Yad Vashem Holocaust Memorial museum said someone with a Nazi ideology “has no place on a committee committed to civil rights, neither in the European Parliament nor anywhere else.”

A spokesman for the Israeli Jewish Congress said, “That a neo-Nazi Holocaust denier like Voigt could join the Parliament’s Civil Liberties, Justice and Home Affairs Committee, which is responsible for the protection of citizens’ rights, human rights, and measures to combat discrimination, is not only a travesty of justice, but an insult to the memory of all the victims of the Holocaust.”

Schulz told EurActiv anyone who denied the Holocaust would face the “strongest of resistance” from him.

EurActiv requested a comment from Voigt, 62, who was convicted of incitement to hate prior to the elections, on Monday. He is yet to respond.