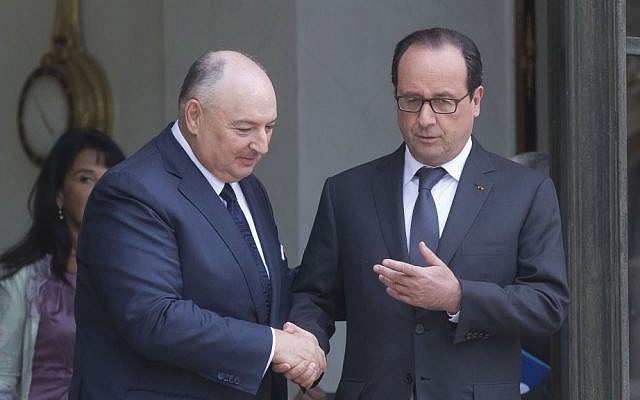 The head of the European Jewish Congress appealed Tuesday for European governments to take tougher action against anti-Semitism – and has made France his starting point.

French citizens are suspected in the two deadliest attacks against European Jewish institutions in the past few years – a shooting at the Brussels Jewish Museum in May, and an attack on a Jewish school in Toulouse, southwestern France, in 2012.

And French Jews are emigrating to Israel in record numbers, in part because of a fear of rising anti-Semitism from the far right and extremist Islam.

“He told us that he accepts if French Jews are leaving France because of Zionism, or because of business motivations, or because of some family relations, but not because of a shortage of security,” Kantor told The Associated Press.

“The situation in Europe and in France – especially I can say in France – is very much in tension,” Kantor said.

Still, Kantor said other European governments could learn from France. He praised the French government’s hard line on anti-Semitism, and notably on Dieudonne, a French comic who popularized a gesture that recalls a Nazi salute.

Kantor called for laws to make a link between security and tolerance, saying no minority can feel secure in an intolerant environment.

“We say we should stop racism, we should stop xenophobia and we should stop anti-Semitism not on the level when somebody starts to kill us,” he said. “We should stop them when we hear their speeches of hate … because otherwise we’ll have more and more every year of the Toulouse and Brussels cases.”