Are The ‘Sins’ Of Israel Visited On Europe’s Jews? 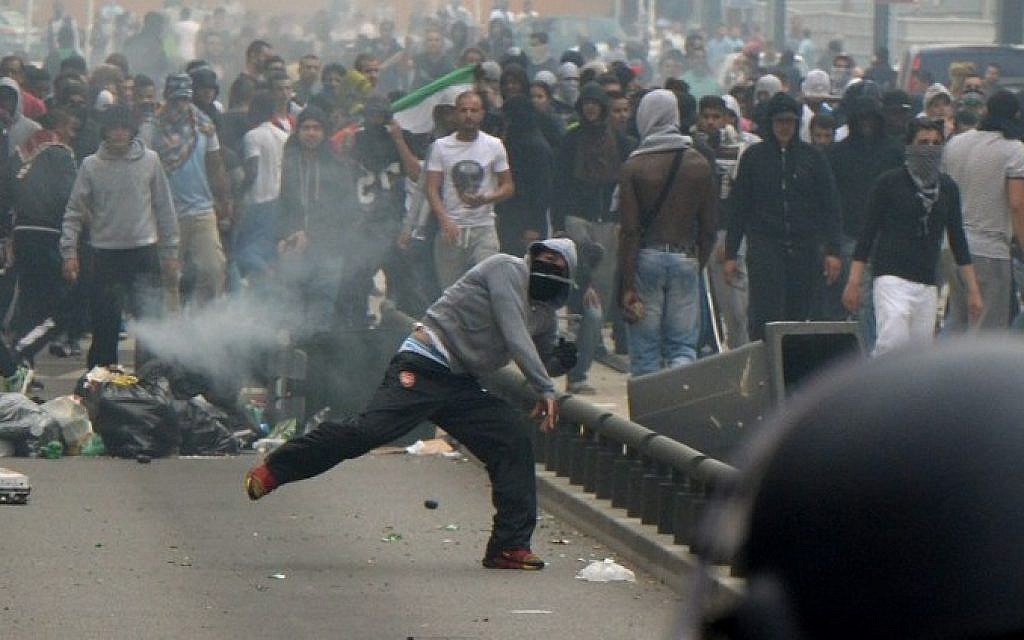 While maybe not at 1930s Germany levels, Europe is infected with an anti-Semitism than should be fled from since there is no cure, says leading scholar

As Operation Protective Edge continues to flame the latent boil of anti-Semitism in Europe, “the ‘sins’ of Israel are being visited on the Jews,” says head of the Anti-Defamation League Abe Foxman.

In Europe, even the most liberal citizens have begun denouncing Jewish communities, saying that the war against Hamas – and collateral damage caused there – is “all their fault,” he says.

“It’s a growing manifestation – this not seeing Jews separate from Israel,” says Foxman. The veneer of “anti-Zionism is not anti-Semitism” has been shattered.

With awed horror, Diaspora Jews have denounced widespread images from bloody pro-Palestinian protests that turned on the Jewish community in Paris with sharp rhetoric. Speakers at an emergency meeting at the Israeli parliament on July 28 decried “a new Holocaust.” Others within social and conventional media have said the state of European Jews is that of “1930s Germany.” And mainstream weekly magazine Newsweek has devoted its latest cover to the issue.

From Jerusalem, Robert Wistrich, professor of European and Jewish history at the Hebrew University and the head of the university’s Vidal Sassoon International Center for the Study of Anti-Semitism, emphasizes that European Jewry is at a dire, nadir moment.

But he is not so quick to draw the parallel with Nazi Germany.

“I am personally rather careful about drawing analogies with the late 1930s in Europe, or let alone Nazi Germany, because we are certainly not in a comparable situation for many reasons,” says Wistrich.

“We are not talking about state-sponsored anti-Semitism, in a European country,” he says, reflecting that there’s maybe something a little closer to that in Iran. “Nor are we speaking about the kind of levels of violence that are familiar to us from the 1930s. As a historian of the Nazis and familiar with Eastern Europe in 1930s, I would say we are quite a long way from that and the nature is quite different in most cases,” said Wistrich.

What has shocked Diaspora Jewry, however, is less the age-old verbal abuse of the “Jews are pigs” variety, but rather the physical expressions of pure violence that have become the signature of French pro-Palestinian protesters. It should be noted, most current reported cases of anti-Semitism in Europe are not physical in nature, but usually verbal threats, graffiti, vandalism, or the fastest-growing category: virtual.

(Foxman wrote a book on the subject, “Viral Hate” with Christopher Wolf, that was published in 2013 with an ominous red cover decorated by a scorpion.)

In conversation with The Times of Israel, both Foxman and Wistrich speak of anti-Semitism as a spreading illness, using words such as “infection” and “disease.” And for Wistrich at least, there is a stark lack of cure.

Foxman attributes the upswing of anti-Semitism to cyber hate, which he dates to 2001 and the Second Intifada. “And it hasn’t diminished since,” he says.

“The Internet organizes it, keeps it going. It’s the new superhighway for hateful expression,” says Foxman.

The case of France

France is today the poster child of the resurgence of European anti-Semitism. But, says Foxman, “There’s an irony about it.”

“If you were to ask me about a country dealing with anti-Semitism in a responsible way, it would be France,” he says. He gives a nod to Jacques Chirac, who during his rule saw a Jewish school bombed in 1995 and was spurred to action in 2002 by a surge of attacks in Istanbul and an attempted bombing of a French Jewish day school.

“Chirac woke up and realized it could have been a much worse disaster,” says Foxman, who explains most countries are in denial of their latent anti-Semitism. France, however, set up an interministerial task force, has provided the Jewish community with security, and “every expression of anti-Semitism has been met with very serious condemnation, starting with the prime minister and president,” says Foxman.

Foxman pauses and says, “Their response is the response that we want, and yet anti-Semitism is growing.” The recent ADL Global 100, a survey and ranking of anti-Semitic attitudes worldwide, found 37% of the French public is anti-Semitic.

The threat to Jews globally is no longer the archetypical German Nazi one, however. It is a Muslim threat, says Foxman.

“You have a significant population in France that is Muslim and infected with anti-Semitism that uses the Israeli-Palestinian conflict to legitimize their anti-Semitism. That’s new,” says Foxman.

To take things further: From Wistrich’s point of view, although the government has cracked down “within limits of a democratic society,” France is a lost cause.

“It’s too late, they won’t be able to fundamentally transform that situation. Like a sickness that was not dealt with for more than a decade, France is now in an advanced stage of disease,” says Wistrich.

At best, he says, the government may be able to “partially palliate the effects of the ravages of anti-Semitism from spreading in France… but it can’t fundamentally turn the tide.”

He foresees a slow mass exodus from France, and eventually Germany, “despite the fact that things look rosier there,” Belgium and elsewhere.

Wistrich is not alone. Head of the Jewish Agency for Israel Natan Sharansky addressed the issue of Jews leaving Europe in a recent Jewish Chronicle article. “I believe we are seeing the beginning of the end of Jewish history in Europe. I see this as a historical moment – as the beginning of the process of distancing Jews from Europe,” says Sharansky.

The German government “for obvious reasons” will try and do what it can to counteract the trends, “but they are the same trends as exist in France and elsewhere,” says Wistrich. With one difference: Whereas in France the anti-Israel Muslim population is largely from North Africa, in Germany it is from Turkey, with at least one million Turkish immigrants in its borders.

“They [the Turkish immigrants] have been infected, and this will get much worse, partly because of Erdogan, who can be crowned as the world’s number one anti-Semite who is also head of the government,” says Wistrich. “He could compete in the Olympic gold medal competition for anti-Semitic heads of state with Ahmadinejad of Iran,” he chuckles.

In this mass exodus, Israel and other countries will benefit, says Wistrich. “The Jews should get out now when they can… Which rational person who cares about their Jewish identity and what will happen to their children, will want to continue in the same way [in Europe]?” Wistrich asks.

Minutes after he walks into his New York home from a solidarity mission to Israel, CEO of the World Jewish Congress Robert Singer tells The Times of Israel that while the situation in Europe is of gravest concern, none of the communities he works with has plans to leave.

“France, Germany, Belgium, and Turkey feel more vulnerable to some extent,” he says and begins reciting an almost endless laundry list of anti-Semitic events in July, including: the chanting of slogans “Death to Jews,” “Gas Jews,” the assault on the rabbi of Casablanca Moshe Ohayan, the attack on the home of Holland Rabbi Binyomin Jacobs, the mob rush on Maccabi Haifa soccer team in Austria…

“When things like this happen, obviously the communities feel uncomfortable,” says Singer.

“It looks much worse than it was ten years ago. There is obviously a rise in anti-Semitism in different places according to statistics and reports. But I think the main thing is in some of the countries such as Hungary, it’s now back in political terms,” says Singer.

Scholar of anti-Semitism Wistrich agrees, saying, “When you look at the statements from the Jobbik party, it is reminiscent in many ways of the radical organic nationalism of [1930s Germany]. And of course they deny they’re anti-Semitic – even when they most certainly are.”

From the Federation of the Hungarian Jewish Communities (MAZSIHISZ), Tamas Desi says his community has faced a daily dose of anti-Semitism from the far-right Jobbik party for years. While there hasn’t been a significant rise of anti-Semitic incidents since the start of Operation Protective Edge, he notes that pro-Palestinian organizations, including the Palestinian Authority embassy and ambassador – which two years ago would not support Jobbik rallies – have now teamed up with the extremist politicians.

The recent European Parliament elections also confirm Singer’s analysis of an upswing in political anti-Semitism/xenophobia: Some 25 percent of Europe voted along extremist right or left lines.

In Greece, three members of the nationalist Golden Dawn entered the EU parliament, and in Germany, neo-Nazi Udo Voigt, who served a year in jail for incitement of hate, represents the country. In France as well, the right-wingers won a resounding victory, led by the anti-immigration, anti-EU party of Marine Le Pen.

In early July, ironically, Voigt, known for praising Hitler and the former head of the far-right National Democratic Party, was named to the parliamentary committee for Civil Liberties, Justice and Home Affairs. In response, Moshe Kantor, the head of the Brussels-based European Jewish Congress, said, “It is surreal and the ultimate insult to the Jews of Europe and to the European Union itself.”

But it is in France that there is the perfect storm, says ADL’s Foxman, with “a coming together of the new and the old anti-Semitism, of right-wing and left-wing anti-Semites, plus a conveyor belt of anti-Semites from the Middle East.”

So it sounds pretty dire, no?

“Hopefully it’s not going there [to 1930s Germany], but there are certainly some negative trends and development we should be watching very closely,” says WJC’s Singer.

He emphasizes that the European Jewish communities of today are very strong. “France, Greece, these are not the communities that are sitting quietly,” says Singer; rather, they are working on varying levels of political and popular intervention in their home countries.

For an example of petitioning leaders of nations, the head of the WJC Ronald Lauder wrote a strongly worded, almost threatening letter to heads of European countries stating that the Jews of the world “cannot accept that pogroms against Jews are being attempted again in Europe or anywhere else in the world… Either you stop this agitation and protect your Jewish population, or you fail to do so and Jews will ultimately turn their back on your countries.”

More moderately, the organization’s CEO Singer says, “These are sensitive times. Everything needs to be monitored closely.”

And, although he disavows the analogy of the rise of Nazism, Wistrich voices the most pessimistic stance on anti-Semitism in Europe.

“Since 2000, we are on a very steady rising curve of explosive anti-Semitism and anything could set it aflame in a massive way. All the elements are in place and have been since the beginning of this century. When people were writing obituaries for anti-Semitism [in the 1990s], I had no doubts it would be a temporary lull,” he says. “The proposition that it will go back to some low level is completely delusional.”

He advises the Jewish communities around the world, including the United States, to “wake up to it – not that I expect people will,” he says, Cassandra-like.

“Having spoken in many parts of the world, I can tell you that Jewish audiences are among the most resistant of all in coming to terms with anti-Semitism – until it reaches an explosive point,” says Wistrich.