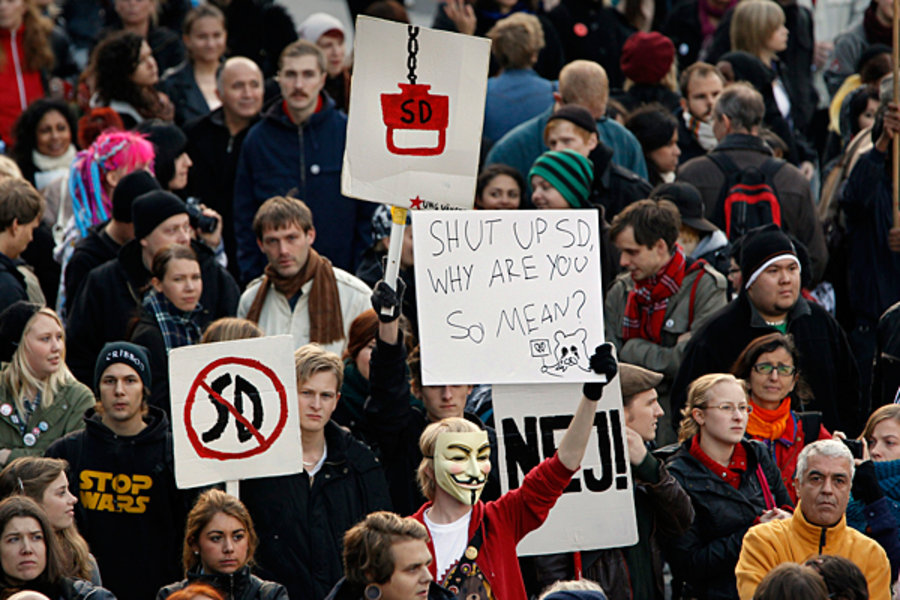 Despite the gains, the Sweden Democrats are unlikely to attain their main goal of sharply reducing immigration because all the other parties are in favor of a liberal asylum policy.

This year, Sweden expects up to 80,000 asylum-seekers from Syria, Eritrea, Somalia, Afghanistan, Iraq and other countries – the highest number since 1992.

The rise of the Sweden Democrats has unnerved many Swedes, who regard the party as racist despite its efforts to soften its rhetoric under Akesson.

Smaller, more extreme groups are also trying to advance their positions in Sweden, including a neo-Nazi group that police said entered a handful of polling stations in Stockholm on Sunday, allegedly intimidating voters by filming them, shouting slogans and spreading confetti with political messages.

The group confirmed on its website that its activists had entered polling stations after burning ballots and an Israeli flag at a rally in downtown Stockholm.

According to the European Jewish Congress (EJC), the success of the Sweden Democrats ‘’is just the latest demonstration of the unchecked rise of the extremist Right in Europe.’’

“Unfortunately, the far-Right is sweeping across Europe and little has been done to retard their growing power,” said EJC President Moshe Kantor.“This should serve as a wake-up call for Sweden and the rest of Europe.”

“The growth of parties like Sweden Democrats are a danger to the future of Europe.”

“European leaders need to deal forcefully with the challenges it faces, immigration, security, radical Islam and terror,” Dr. Kantor continued. “The answer to these challenges is not hate and racism. We need leaders who will deal with these issues, not leaving the ground fertile for populist slogans but in a meaningful and democratic manner, because it is not just the Jewish community which feels unsafe.”

“We call on the new Swedish government to find answers not based on hate, racism and anti-Semitism, but to maintain and protect religious and minority rights in the country.”