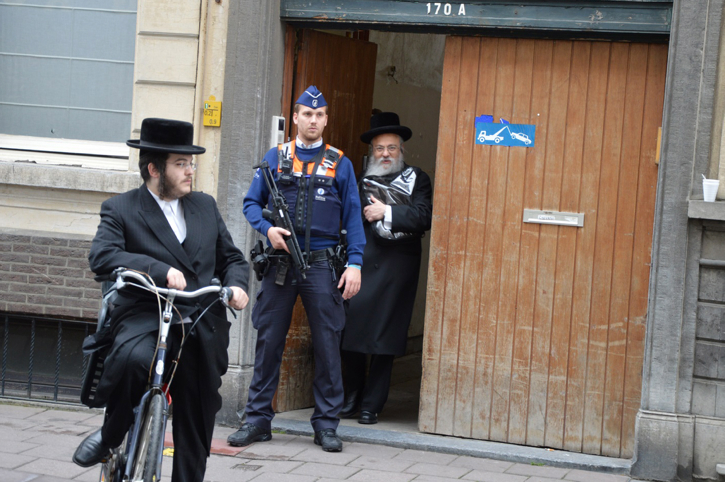 According to initial reports, the 31-year-old man was attacked while walking to his local synagogue in the city’s Jewish quarter

The victim, a Haredi man, was walking to his local synagogue with a friend when he was attacked by a knife-wielding man and stabbed in the neck.

The man’s condition is better than previously thought, and is expected to be released from the hospital Saturday evening.

The motive for the attack, which occurred under a train bridge on Pelican Street, remains unclear, local police said, and the suspect remains at-large. A manhunt is currently underway based on descriptions provided by witnesses to the attack. A police spokesman said that a suspect initially arrested was later released.

According to the European Jewish Congress, an “attacker ran towards two chasidim who were on their way to the synagogue, stabbed one of them in the throat and got away.” A local protection unit operated by the city’s Jewish community reportedly went out onto the streets immediately after the attack in order to protect Jewish residents on their way to Shabbat synagogue services.

The alleged attack follows the murder of four people, including two Israelis, Emanuel and Mira Riva, in a shooting attack at the Brussels Jewish Museum in May. The gunman, Mehdi Nemmouche, 29, a French-Algerian man who is believed to have traveled to Syria to fight with Islamist militants, was arrested in France and extradited to Belgium in July.

During the recent Israel-Gaza conflict, dozens of men at an anti-Israel demonstration in Antwerp shouted slogans about slaughtering Jews. Approximately 500 people attended a protest in the capital of Belgium’s Flemish region, where one of the speakers used a loudspeaker to chant a call in Arabic that means “slaughter the Jews.”