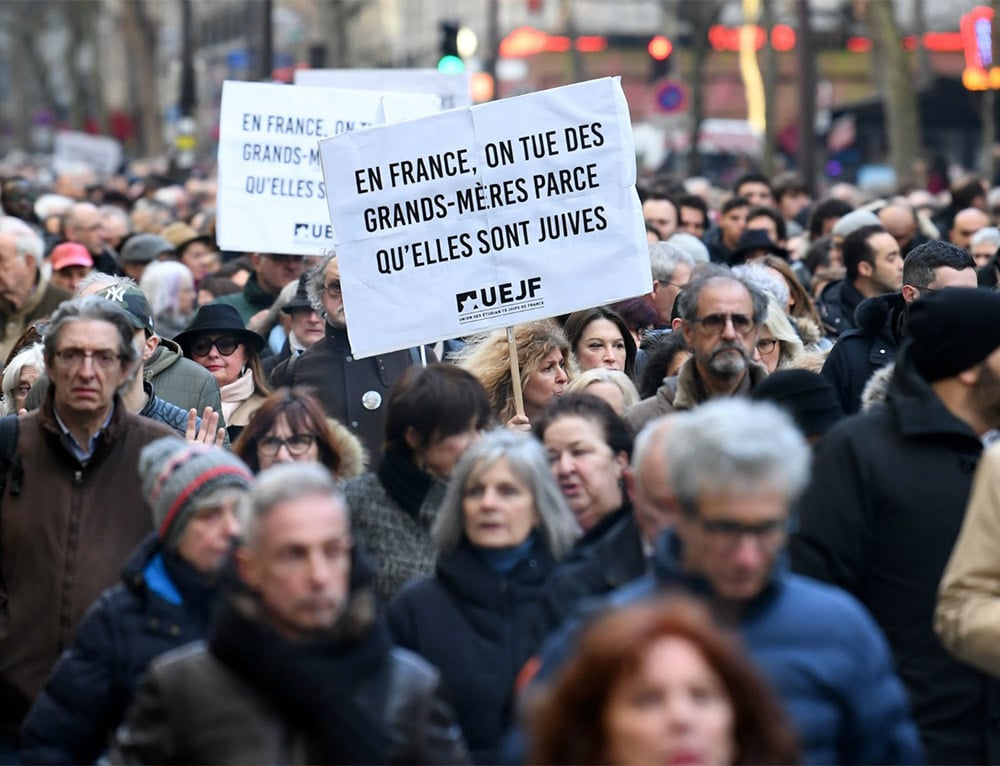 EJC President Moshe Kantor: “The greatest right is the right to life and security, this right is being deprived of more and more Jews who are growing ever more fearful that they do not have the same freedoms as other French citizens.”

French police arrested two men in the city of Creteil on Monday following the assault of a young couple in a suspected anti-Semitic incident, according to the French newspaper Le Parisien.

The two suspects, both adults, are currently in police custody for questioning while a third suspect is still being sought.

On Monday, three men armed with a pistol and a shotgun stormed the home of a Jewish family in Creteil, located east of Paris, according to a report by French channel BFMTV.

After knocking on the door of the apartment and then breaking in, they demanded money and uttered anti-Semitic insults.

One of the sons in the family, 21 years of age, was there at the time with his 19-year-old girlfriend while the parents were away.

One of the assailants proceeded to withdraw money from the nearest ATM with the couple’s stolen debit cards while the two others remained in the apartment with the couple. The duo then raped the woman and tied up the young man. After hearing the screams, a neighbor called the police.

A witness told BFMTV that the men in question, who reportedly knew the residents of the apartment, were looking for the Jewish man’s younger brother, who works in a Paris shop, believing he would be carrying large sums of money.

“My brother and his girlfriend’s feet and hands were tied and their mouths were taped shut,” the younger brother said. “The assailants were pointing at them with guns.”

“At one point, they even put one [of the guns] on my brother’s lap, who was unable to move. They shouted and insulted them as they ransacked the apartment. Everything was destroyed in every room,” the young man told BFMTV.

The parents of the victims have filed a complaint with the police for the violent attack and the its ‘’aggravating anti-Semitic nature.’’

Following the brutal attack, the European Jewish Congress (EJC) expressed shock and horror and called for a robust and immediate government response and a plan of action to combat anti-Semitism in France.

“Once again Jews have been violently targeted and attacked,” said EJC President Moshe Kantor. “Unfortunately, it appears that it is ‘open season’ on Jews in France following so many recent violent attacks against Jews and Jewish institutions going all the way back to the brutal torture and murder of Ilan Halimi.”

“We call for the issue of anti-Semitic attacks to be placed at the forefront of the French government’s agenda and it requires an immediate response and plan of action to rid France of this scourge and allow Jews to feel safe once again.”

The EJC called on police and public authorities to enhance security at Jewish institutions and to protect the Jewish community.

“The response has to be reactive but also pro-active and we call on the French authorities and law enforcement agencies to get to the root of the problem and that is the spread of incitement against Jews which provides the impetus for thugs like these to believe that Jews are deserving targets,” Kantor said.

“The greatest right is the right to life and security, this right is being deprived of more and more Jews who are growing ever more fearful that they do not have the same freedoms as other French citizens.”

“This should be an intolerable situation for French authorities and we hope it will be remedied as soon as possible.”