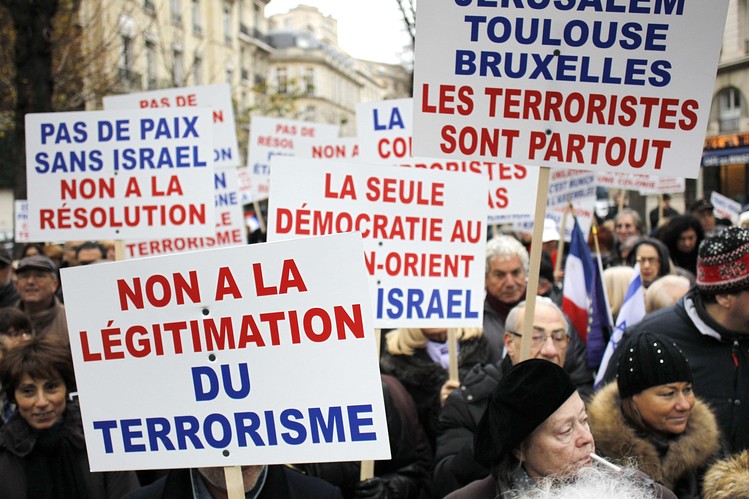 The vote, which passed the National Assembly 339 to 151 on Tuesday, is the latest attempt by parliaments across Europe to ratchet up pressure on Israel to return to the negotiating table after U.S.-led talks between the Israelis and Palestinians broke down in the spring.

The French government isn’t required to act on the parliamentary motion, which is nonbinding. The resolution passed, however, with the backing of Mr. Hollande’s Socialist majority in the lower house.

Mr. Hollande’s government has also threatened unilaterally to recognize Palestinian statehood if the Israelis and Palestinians don’t commit to a timetable for reaching a two-state solution that accords sovereignty to each side.

“Fundamentally, France supports the two-state solution. France will therefore recognize the Palestinian state. The principal question is when and how,” Harlem Desir, France’s secretary of state for European Affairs, told parliament before the vote.

France joins a wave of U.S. allies who are losing patience with Washington’s stated policy that a Palestinian state can be established only through an agreement negotiated between the two sides.

Sweden unilaterally recognized Palestinian statehood in October. The parliaments of U.K., Ireland and Spain have also voted in favor of taking steps to endorse statehood, though those votes were nonbinding.

Now, European governments have begun to wield the threat of recognizing Palestinian statehood to prod Israel back into the peace talks. U.S. and European officials worry that unless the talks resume, there will be a surge in the violence that has recently gripped Jerusalem, the West Bank and the Gaza Strip.

“We will, indeed, recognize a Palestinian state at a time of the government’s choosing, and we will choose that time on the basis that it will be designed to deliver the maximum possible impetus to the peace process,” U.K. Foreign Secretary Philip Hammond told the British Parliament on Tuesday.

Moshe Kantor, the president of the European Jewish Congress, warned that recognition of Palestinian statehood risked hampering, rather than encouraging, the resumption of peace negotiations. “Recognizing a new state whose leaders have no legitimacy…will just destabilize the region further,” he said.

The French government is pushing to organize an international conference in Paris aimed at brokering an agreement between Israel and the Palestinians. The question of Palestinian sovereignty would be used as a “tool for definitively solving the conflict,” French Foreign Minister Laurent Fabius told lawmakers last week.

“If this last attempt at a negotiated solution doesn’t succeed? Well, France must perform its duties, recognizing a Palestinian state without delay,” he added.