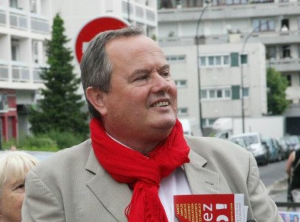 A French judge has ordered the communist-dominated municipal authorities in the city of Bezons, to the north-west of Paris, to remove a plaque honoring the Palestinian terrorist who assassinated Israeli Tourism Minister Rehavam Zeevi in Jerusalem in October 2001.

Following a complaint filed by Sammy Ghozlan of the National Bureau for Vigilance against Anti-Semitism (BNCVA,) the judge informed the Bezons Council that its original decision to confer honorary citizenship on the terrorist, Ihrima Majdi Al Rimawi, was invalidated. The council now has to remove the plaque dedicated to Al Rimawi by January 19, one month from the date of the judgement.

Al Rimawi is associated with several terrorist attacks, including the assassination of Ze’evi, which was carried out in the name of the Popular Front for the Liberation of Palestine (PFLP) – the same terrorist organization which claimed responsibility for last month’s atrocity at a synagogue in the Har Nof neighborhood of Jerusalem, in which four rabbis and a Druze police officer were brutally murdered. He is currently serving a sentence of life imprisonment plus eighty years in an Israeli jail.

In February 2013, the communist-dominated Bezons Council voted to confer honorary citizenship on Al Rimawi a few days after holding a debate on what it described as “Palestinian political prisoners” serving jail time in Israel.The plaque ceremony was attended by al Rimawi’s wife, Fathia Barghouti, a former mayor of Bani Zeid, a village in the West Bank north of Ramallah where al Rimawi lived until he was jailed.

“For us, the family of the prisoner, this award is a great gesture from the French people and shows their support of the issue of Palestinian prisoners in general, and in particular the issue of prisoners sentenced to long prison terms,” Barghouti declared at the ceremony.

Dominique Lesparre, the communist mayor of Bezons, accused Israel of waging a “genocide” against the Palestinians, and lauded Al Rimawi as “a participant in the intifada, the struggle for the right to self-defense…and to defend his country against the occupation. For his resistance, he has been in prison since 2002.”

After the honor was bestowed on Al Rimawi, Dr. Moshe Kantor, of the European Jewish Congress stated that it was “inconceivable for an elected official to be so ignorant as to call a cold-blooded murderer a victim.” Kantor added that “this type of glorification of murder is sending a very ominous message to the next Merah” – a reference to Muhammed Merah, the French Islamist who carried out a bloody terrorist atrocity at the Ozar HaTorah school in Toulouse on March 19, 2012, during which a rabbi and three small children were murdered.