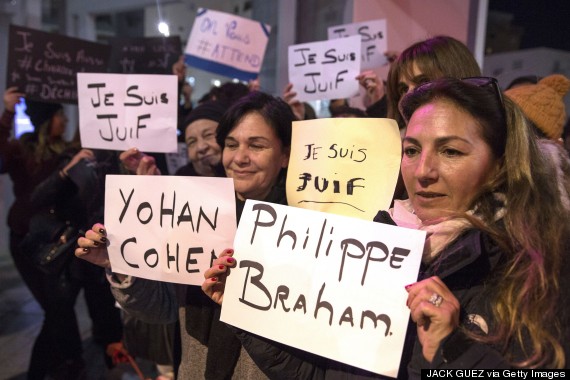 On the face of it, there was nothing but good will. The prime minister of Israel was greeted at the Great Synagogue in Paris with cheers as he entered the building, and the next day the crowd who came to see Benjamin Netanyahu spontaneously broke into the song of ‘Am Yisrael Chai’ [The Jewish people live].

Benjamin Netanyahu was there with France’s President Hollande to pay respects to the four victims of a Islamist gunman who took dozens hostage at the Hyper Cacher kosher grocery store in Paris, as well as the 12 killed in a connected incident at the headquarters of magazine Charlie Hebdo.

Despite the seemingly warm reception from a community that has provided Israel with more than 5,000 immigrants over the past 12 months, many within it are still bristling at the suggestion that Jews face an existential threat in Europe, and now must “return” to their true home.

Netanyahu’s comments were not something helpful for French Jews to hear in the wake of the Paris attack, European Jewish Association Rabbi Menachem Margolin told the website NRG: “Every such Israeli campaign severely weakens and damages the Jewish communities that have the right to live securely wherever they are.”

France has the largest Jewish population in Europe, and is the third largest in the world, after Israel and the United States, topping in at a population of around 500,000.

Rabbi Laura Janner-Klausner, leader of the British Movement for Reform Judaism who visited communities in Paris and attended the solidarity marches this weekend, said such a narrative was “unhelpful for Jews in Britain and in France”.

“No one I met said they were getting on a plane,” she told HuffPost UK. “We stand, with all our hearts, with French communities. And one of the ways to stand alongside communities is to listen to them, not to push them. You say, ‘I hear your fear and your pain, and it’s not for anyone else to dictate to you what you should be doing.

“There is a difference between saying ‘Israel is here for you’ than saying ‘You ‘should’ be here, should is a problematic word’. There is this ‘oy vey’ the world is against us narrative, which thank god, is not true. It is certainly not true in Britain. So please don’t hurt the fantastic relations between Jews and British society.”

Israeli politicians themselves expressed some discomfort. Tzipi Livni, formerly a coalition partner of Netanyahu but now running for the opposition Labor party, said it was a sign of her opponent’s political weakness. “Jews should not immigrate because it is a safe haven,” she said on Sunday.

“The events in Paris do not only involve Jews and are not just their problem. This is a global struggle against extremist Islamic terrorism and we need to enlist the world to fight against it too,” she stated. “Israel must work smarter – not to worry about whether they [the rest of the world] understand what we go through, rather how to join an international coalition for the defence of our shared values.”

The Israeli prime minister’s attendance at the march was an internationally uncomfortable tint to the day’s proceedings that the French president had apparently hoped to avoid, with Haaretz reporting that Francois Hollande was not keen on Netanyahu’s visit, because it would shift focus to the Israel-Palestine conflict’s effects on Muslim-Jewish relations.

“If 100,000 Jews leave, France will no longer be France. The French Republic will be judged a failure,”France’s prime minister Manuel Valls told the Atlantic. “The Jews of France are profoundly attached to France but they need reassurance that they are welcome here, that they are secure here.”

Vall’s government want no one to be able to say they are not providing that reassurance. On Monday, France announced it was sending almost 5,000 police to protect Jewish institutions and buildings. Defence minister Jean-Yves Le Drian said the troop deployment was “the first time that our troops have been mobilised to such an extent on our own soil.” Seven hundred police officers will guard the 717 Jewish schools in France, in addition to the 4,100 gendarmes who are already assigned.

And French Jews seem, for the most part, to have placed their trust in authorities. True, it was Netanyahu, not Hollande, who got a cheer at the memorial in the Grand Synagogue of Paris, but that may be more to do with the latter’s political popularity and welcoming of a foreign leader who had, whatever individuals thought of his brand of hawkish politics, flown in specifically to show solidarity with France’s Jews. But at the end of the memorial, it was La Marseillaise, the French national anthem, that rang out spontaneously in the synagogue.

In July last year, Natan Sharansky, chairman of the Jewish Agency for Israel and the country’s former deputy prime minister, told HuffPost UK that a new wave of European Jewish immigrant were fleeing to Israel, mainly due to anti-Semitism, and that European Jewry’s days are numbered: “The way things are developing in Europe, Jews will increasingly start to feel there is no future there. The number of French Jews leaving is very symbolic.”

“Of course I believe Jews should stay in Europe,” Dr Moshe Kantor, president of the European Jewish Congress, told Huffington Post UK. “There is no question that the majority of Jews should be in the diaspora.

“But I do think we are starting to see the beginning of a new exodus. We have our information that suggests 10,000 Jews have left France. When there is economic crisis, Jews are always the first crisis, and Europe over the last three years, GDP has been less than 1%.”

The debate is also raging on this side of the pond, with Jewish Chronicle editor Stephen Pollard saying on Friday that an exodus had begun, and “every single French Jew I know has either left or is actively working out how to leave”. He added that the situation was “the largest emigration of Jews anywhere since the war”.

It’s an argument that has also played out across social media: “I’d be mightily annoyed if God forbid something happened in UK and Bibi flew in to tell us how we were feeling and that we could move to Israel if we wanted. Just doesn’t feel right,” Jewish Londoner Ben Ullman, a former senior advisor to the Chief Rabbi, posted on Facebook this week.

“I seriously object to this narrative emerging from Israel that all French Jews should now move to Israel, ‘their home’,” journalist Miriam Shaviv wrote on Sunday. “It is completely unhelpful to the Jews of France to be vocally proclaiming that they don’t really belong there, that they’re not really French, right now.”

Her comments were echoed by Jay Stoll, the 23-year-old public affairs director of the London Jewish Forum. “Terrorism is a danger facing Jews globally, not least in Israel,” he told HuffPost UK. “Bibi’s comments chime well with the aspirational idea of Israel as a safe haven, but tragedies like the Har Nof massacre [the stabbings of four rabbis in a Jerusalem synagogue] last November reminds us that the reality is different.

“The suggestion that I am safer in the Middle East does not stand up well against the affinity I feel with British society, nor my lived experience as a Jewish Brit.”

Rabbi Jonathan Romain, of Maidenhead synagogue, said he wanted to encourage European Jewry not to despair. “It maybe true that this particular week, it is easier being Jewish in Israel than in France, but the killing of four Jews in a supermarket, in attacks which also saw the death of a Christian policewoman and a Muslim security guard, does not mean that the vibrant Jewish life in France that has existed up till now cannot continue after this terrible event,” he said.

“Mass evacuation is not the answer and there are many other options to pursue, including attempts to bridge the divide between Jews and Muslims in France.”

Several British Jews pointed out their belief in the importance of Jews living outside of Israel and having their homelands elsewhere. “It is easy to say that we should all run to Israel if things get worse, but if all we do is run and Israel is just a refuge where we live in isolation and fear of the outside world, how long will it be before Israel is under even greater existential threat than it is today?” said Marc Cohen, a publicist from London.

“What sort of Jewish world would our children and grandchildren inherit? Isolating ourselves and living in fear is easy, facing up to the challenges of the world, overcoming them and helping our friends and neighbours overcome their demons is much harder, but ultimately it is the only way we can continue to succeed and thrive as a community.”

But Shaul Robinson, the British rabbi of Lincoln Square synagogue in New York, said attacks from Jews on Netanyahu’s statement were uncalled for and wrong. “I am literally shaking my head in disbelief at a whole slew of Jews on Facebook tut-tutting Bibi and all those offering Israel as a home to the Jews of France. How dare he?” he wrote. “Ask any Holocaust survivor if they wish they had had an Israel to go to, and see what they say?”

“French aliyah [immigration to Israel] is at an all time high, for understandable reasons – why are you objecting to that? I am sorry the world turns out to be a lot more hostile to Jews than we all like, but lets not use our antipathies to politicians to encourage people to stay in harm’s way. And you know what? Israel is our home. End of Story.”