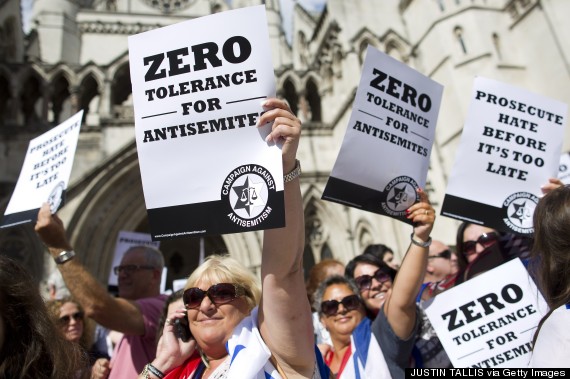 Nearly half of Britons hold anti-Semitic views, with one in four believe Jews are more money driven than others, and one in six believing Jews had some control over the media, a survey has found.

Ukip supporters are far more likely to hold anti-Semitic views than supporters of other parties, by around 9%, a poll of more than 3,400 UK adults found.

In a separate amateur survey conducted on social media, it was claimed 54% of British Jews feared they had no future in the UK and 25% said they have considered leaving the country because of anti-semitism. The poll of 2,230 British Jews found 56% felt that anti-Semitism now echoes the 1930s, 45% felt their family was threatened by Islamist extremism and 63% thought authorities let too much anti-Semitism go unpunished.

The surveys were conducted on behalf of the Campaign Against Anti-Semitism, which is a grassroots group set up this summer during rising tensions in Britain over the conflict in Gaza.

Many in the Jewish community have questioned the methodology used in the survey of British Jews, which relied on the sharing of the survey between Jews via social media or Facebook, after asking them two data integrity questions.

The survey was targeted on Facebook to users in Great Britain who “identify on Facebook as having an interest in Judaism or Jewish issues” and shared via Facebook pages of Jewish institutions, as well as sent through synagogue mailing lists. Major polling organisations “did not have enough Jewish panellists on their databases” to conduct the survey.

Where is this ‘majority of Jews’ in Britain who see no future here?! Are they serious? Are they real? Majority my tuchus.

In short, the survey of over 2,000 Jews was taken by sharing the poll on social media, by email etc. and relying on people who responded

Makes sense that the group who responded would have been skewed towards those who are most concerned about anti-semitism.

Surveying European Jews is “notoriously complex”, according to the Institute for Jewish Policy Research which is responsible for most of the significant academic research into British Jewry.

A report for JPR into anti-Semitism in Europe published in July last year in connection with European Union Agency for Fundamental Rights and Ipsos MORI found about 90% of the United Kingdom-born Jewish respondents reported a very strong or fairly strong sense of belonging to their country, with half feeling anti-Semitism is “not a very big problem” or “not a problem at all.”

In the ranking of issues, including the economy, education, employment, crime and immigration, anti-semtism came nineth out of a possible ten in a list of the UK’s biggest problems, according to the survey. However, close to 70% indicated that antisemitism had increased in the past five years.

Wednesday’s YouGov survey was commissioned in the wake of an anti-Semitism motivated attack on a kosher supermarket in Paris, where four people were killed by an Islamist gunman linked to the massacre at the Charlie Hebdo magazine last week.

Around 45% of British adults believed at least one anti-Semitic view presented to them was “definitely or probably true”, including 13% who thought Jews talked about the Holocaust to get sympathy, according to the YouGov survey. One in five said they thought a loyalty to the state of Israel meant that British could not be as loyal to the UK, but only around 10% said they would be unhappy if relatives married a Jew.

In the wake of several anti-Semitic incidents in France and mainland Europe, including the killings at the Paris HyperCacher store, the murders at a Jewish museum in Belgium, and the shooting of Jewish schoolchildren and a rabbi outside a school in Toulouse, emigration is on the up, with a record 5,000 Jews leaving the country last year.

In July last year, Natan Sharansky, chairman of the Jewish Agency for Israel and the country’s former deputy prime minister, told HuffPost UK that a new wave of European Jewish immigrant were fleeing to Israel, mainly due to anti-Semitism, and that European Jewry’s days are numbered: “The way things are developing in Europe, Jews will increasingly start to feel there is no future there. The number of French Jews leaving is very symbolic.”

“Of course I believe Jews should stay in Europe,” Dr Moshe Kantor, president of the European Jewish Congress, told Huffington Post UK. “There is no question that the majority of Jews should be in the diaspora.

“But I do think we are starting to see the beginning of a new exodus. We have our information that suggests 10,000 Jews have left France. When there is economic crisis, Jews are always the first crisis, and Europe over the last three years, GDP has been less than 1%.”

The debate is also raging on this side of the pond, with Jewish Chronicle editor Stephen Pollard saying on Friday that an exodus had begun, and “every single French Jew I know has either left or is actively working out how to leave”. He added that the situation was “the largest emigration of Jews anywhere since the war”.

Some 269,000 Jewish people live in Britain, making up 0.4% of the population, but last year saw the most anti-Semitic incidents recorded by police since records began 30 years ago.

Gideon Falter, chairman of the CAA, said: “The results of our survey are a shocking wake-up call straight after the atrocities in Paris. Britain is at a tipping point. Unless anti-Semitism is met with zero tolerance, it will grow and British Jews will increasingly question their place in their own country. Britain’s Jews must be shown that they are not alone.”

Jonathan Sacerdoti, the campaign’s director of communications, said: “Jewish people have contributed to almost every part of British life, yet rising anti-Semitism here and across Europe means that now more than ever Jews are afraid. Some are even reconsidering their future here. British values of tolerance and pluralism must be upheld, so that minority groups like Jews feel comfortable and protected.”

Communities Secretary Eric Pickles said: “Jews are an important part of the British community, and we would be diminished without them. Anyone who peddles anti-Semitic views is attacking Britain and British values.

“This Government has done much to enhance Britain’s status as a safe, tolerant place for Jewish people but we are not complacent. We remain committed to tackling it wherever and whenever it occurs and continue to take a zero-tolerance approach. Those who commit hate crimes will be punished with the full force of the law.”

«I believe that Jews know deep in their hearts that they have one country – the state of Israel, home for all of us»

Netanyahu’s comments were not something helpful for French Jews to hear in the wake of the Paris attack, European Jewish Association Rabbi Menachem Margolin told the website NRG: “Every such Israeli campaign severely weakens and damages the Jewish communities that have the right to live securely wherever they are.”