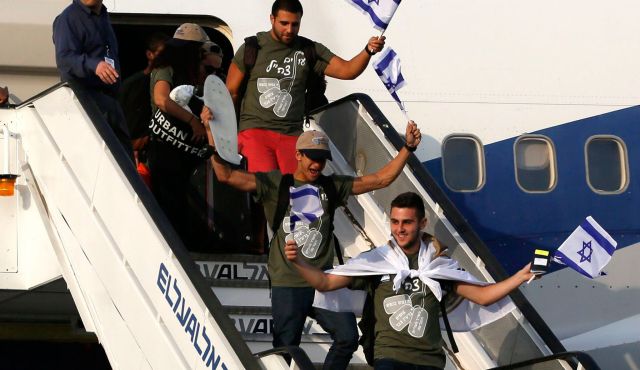 On Friday, Jewish schools in Belgium and the Netherlands were closed for the first time since WWII due to fears that they could be targeted by Muslim terrorists.

The move followed a raid by Belgian police on a terrorist cell in the city of Verviers, close to the German border. Two suspected terrorists died, and one was seriously wounded in the police raid.

Belgian officials said that the police operation stopped a major terrorist attack from taking place. Federal prosecutor Eric van der Sypt said that the planned attack had the potential of the terror in Paris a week earlier.

A senior counter-terrorism official pointed out that the terrorist group had received instructions from the Islamic State.

Dr. Moshe Kantor, who headed the delegation, told Mogherini that the European Union needs to create a position and organization specifically geared toward finding long-lasting solutions for anti-Semitism and other forms of racism. Kantor, who had earlier said that “normative Jewish life has become unsustainable in Europe,” added that recent events have demonstrated that “The Jews’ sense of security in many parts of Europe is at its lowest point since the end of the Holocaust, and many are leaving their homes as a result.’

Kantor stated that European Jewry had warned of an escalation of violence ever since the massacre at a Jewish school in Toulouse in 2012, in which three Jewish children and a Rabbi were murdered.

The attack on a Kosher Supermarket in Paris in which four Jews died on Friday the ninth of January could be a watershed moment for European Jewry. More and more European Jews are mulling emigration due to increasing anti-Semitism. According to a 2013 report by the EU’s Fundamental Rights Agency, one in three Jews in a number of EU countries were thinking of leaving Europe for Israel or other parts of the world.

A survey amongst British Jews by the recently established grassroots organization Campaign Against Anti-Semitism (CAA) revealed that 45% of Britain’ Jews are concerned that they may not have a future in Britain. The figure rises to 58% when asked if there is a future for Jews in Europe.

Jewish Agency chairman Nathan Sharansky reported a dramatic increase in the number of French Jews who ask for information about immigration to Israel (aliyah). In an interview with The Jerusalem Post that was published before the terrorist attacks in Paris, Sharansky said that in 2014, 50,000 Jews from the Paris area asked the Jewish Agency for information about immigration.

He added that hundreds of thousands of French Jews are contemplating leaving France. He also reported a dramatic increase in Jewish Agency meetings where people receive information about aliyah. In 2013, the Jewish Agency organized one meeting per month for 200 people. Now, 400 potential immigrants attend these meetings every evening.

French Jews seem to have lost any confidence in the ability of the French authorities to protect them from anti-Semitic attacks. The violence against Jews has reached such a point that even the founder of France’s National Bureau for Vigilance Against Anti-Semitism, Sammy Ghozian, is fleeing to Israel. He said that his departure is “a message” and added that”we do not know how things will play out tomorrow.”

Jews were the target of 40 percent of all racist crimes in France in 2013. The French government and media have ignored growing anti-Semitism in France for a long time. Even during the first hours of the attack on the Kosher supermarket on Friday January 9th, French media refused to report that it was an attack on Jews.

The same thing happened in January 2006, when Ilan Halimi was kidnapped, tortured, and stabbed to death by a gang of anti-Semitic Muslims. During the twenty-four days of Halimi’s captivity, French authorities refused to consider the anti-Jewish nature of the crime–or the fact that the kidnappers were driven by Islamic anti-Semitism.

Last week, French Prime Minister Manuel Valls admitted in the French parliament that anti-Semitic attacks in France have grown to an intolerable degree. Valls insisted that France needs to protect its 500.000-strong Jewish community, lest France itself be destroyed. He added that an attack on French Jews is an attack on France.

President Hollande, however, seems to be more concerned about the fate of the Muslim community in France. Speaking to France after the terrorist attacks in Paris, Hollande said, ” These fanatics have nothing do with Islam.”

Later, during a meeting with French Muslim leaders at the Institute of the Arab World in Paris, Hollande said that Muslims were “the first victims of fanaticism and fundamentalism and intolerance.” He also said that Islam is compatible with democracy and that there should not be any confusion about this.

Hollande’s statements might have assured Muslims in France; but for the Jewish community, they are further proof that Jews have no future in France.

Israeli authorities are therefore preparing for the influx of thousands of French immigrants.

Last year, immigration of French Jews to Israel doubled to more than 7,000 people. This year, the Jewish Agency expected 15,000 French Jews to make aliyah; but that was before what Deputy Mayor of Paris Patrick Klugman dubbed the “French 9/11.”

The aliyah of French Jews is also expected to give a boost to the Israeli economy. Many French Jews are entrepreneurs, and most of them are highly educated. Nearly a fifth of the French immigrants who arrived last year were engineers or people with a MBA. They have found employment in Israel’s high tech sector, where there is room for thousands of programmers and executives. The French immigrants are also expected to help build more economic bridges between Israel and the French speaking countries.