The Migration Of French Jews 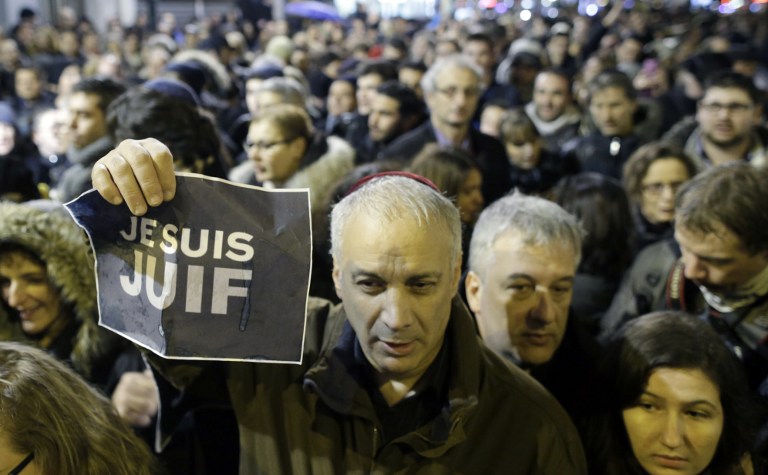 Arab media outlets are still preoccupied with debates regarding the Paris attacks. They are lost in their arguments as they try to figure out what really happened by deciphering the validity of the official French narrative of events. Some outlets support the participation of Arab leaders in the Paris march while others condemn it. It was interesting to see the media’s reaction to the Arab world’s presence in the French capital as they stood in support of freedom of speech and expression while Benjamin Netanyahu could be seen jostling his way to the front. It was humiliating to see him standing with Arab leaders.

However, one must note that many of these media outlets have failed to note the seriousness of Netanyahu’s remarks as he encouraged French Jews to migrate to occupied Palestine if they do not feel safe in France. The French government has yet to make any official comment about the Israeli prime minister’s remark, which was, wrote Shmuel Rosner wrote in the New York Times, essentially “a vote of no confidence that France has the ability to protect its citizens”.

History demonstrates that the Zionist movement and Israel have long taken advantage of crises in foreign countries with Jewish populations in an effort to encourage Jews to move to Israel. The experience of Iraqi Jews is well known in the Arab world and the case of Ukraine is the most recent example internationally.

“[The] Jews have been put at the front of the war lines,” said the President of the European Jewish Congress, Moshe Kantor; his comments were made as part of the campaign to encourage more Jews to leave their home in France. According to a joint statement issued by Israel and the Jewish Agency, France topped the list of countries from which Jews migrated last year, with Ukraine in second place.

On 10 January, Reuters quoted the head of the Jewish Agency, Natan Sharansky, as saying that he expects approximately 10,000 French Jews to move to Israel in 2015. Sharansky confirmed last week that around 5,000 have already asked for more information about migrating.

Never known for his subtlety, Israeli Foreign Minister Avigdor Lieberman demonstrated his total lack of respect for the sovereignty of France and the prestige of the state and its ability to protect its citizens. “If you are looking for security and a safe future for your children,” he told French Jews, “there is no other alternative than living in Israel.”

International observers are confused by the French government’s silence over Israel’s blatant efforts to displace its Jewish citizens, especially since it knows very well that Palestine is the home of Palestinian Arabs and not French Jews or Jews of any other state. It also knows that it is unjust to allow Jews from around the world to enter Palestine while Palestinian refugees are denied their right of return.

French President François Hollande responded to the Israeli government’s remarks by insisting that, “France is the home of French Jews.” Meanwhile, Prime Minister Manuel Valls elaborated that France without its Jews would no longer be democratic as it is home to the third largest population of Jews after Israel and the United States. Valls argued that France’s Jewish population is integral to the democratic values that were established by the French Revolution of 1789.

Nevertheless, the French government allowed the bodies of four Jewish victims of the recent attacks to be taken to Israel for burial, arguing that it was what the families wanted. The government sent Minister Ségolène Royal to attend the funerals on behalf of France in honour of the dead. The decision to honour French citizens outside the country contradicted the government’s initial call for the world to stand in their honour in its own capital.

In doing this the French government has allowed Benjamin Netanyahu to make a cheap political point at the expense of its citizens so that he may boost his image before the General Election in March. The French have allowed Netanyahu to cheapen its citizens’ blood by turning what should have been an international day of mourning for the people of France into a call to depopulate the country of Jews. The government’s reaction, or lack thereof, is tantamount to a tacit agreement to incite French Jews to emigrate, confirming by default Israel’s claims that French Jews are not safe in their own country.

While it is true that in some respects this issue lies at the heart of bilateral relations between France and Israel, and what we read about France these days is a question of French sovereignty alone, one cannot deny that the government’s silence on this matter is more or less complicity in the migration of French Jews as colonists in occupied Palestine. This contributes to the settler-colonial project that is taking place in the occupied territories and complicates further the Palestine-Israel conflict. The Israeli Minister of Housing, Uri Ariel, has already told settlement councils to “prepare for the expansion of settlements in order to accommodate French Jewish immigrants” because “the Jews of France feel a deep connection with the settlement movement in the West Bank.” Ultimately, this matter also affects Palestinian and Israeli security.

The French government should have warned its citizens of the dangers of migrating to Israel, perhaps by issuing a statement mirroring that of Iranian-Israeli Jew Orly Noy’s last week: “The leader of our country is in a permanent state of war as he goes to war every few years. Now he is calling on the Jews in France to leave their country and yet, no one is even sceptical of the possibility that French Jews will live at an even greater risk by moving to Israel.” Noy reminded his French counterparts that Israel has now become more repulsive than attractive to many of the world’s Jews; nearly 650,000 have left Israel since 2005, according to the Israeli Central Bureau of Statistics.

Jewish migration to Palestine led to the ethnic cleansing of Palestinians from their historic homeland and the establishment of the state of Israel. The Zionist call for Jews to migrate to Palestine is older than the state itself, which could not have been established without mass Jewish migration from around the world and the creation of a threat that the West calls “Islamic terrorism”.

Exactly 25 years ago, on 14 January 1990 after the collapse of the Soviet Union, the then Israeli Prime Minister Yitzhak Shamir said that Israel intended to “absorb” what he called “the great migration” of the Soviet Jews. Ultimately, Shamir told his audience, this “requires that Israel be great as well”, meaning that the Zionists need to retain the occupied Palestinian territories that they have colonised since 1967. Unfortunately for the Palestinians, this is still the official policy that has been implemented by successive Israeli governments ever since.