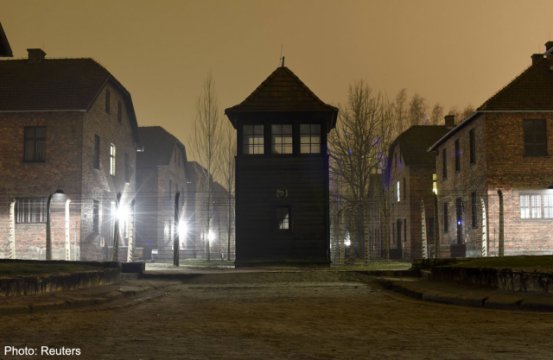 Seventy years after it was liberated, 300 Auschwitz survivors-most now in their nineties -will on Tuesday return to the former Nazi death camp, the site of the largest single number of murders committed during World War II.

Between 1940-45 some 1.1 million people, including one million Jews, perished in the twin death camps of Auschwitz-Birkenau created by Nazi Germany in Oswiecim, southern Poland.

Liberated by the Soviet Red Army on January 27, 1945, the camps have become an enduring symbol of the horrors of Nazism and the Holocaust, which claimed the lives of six million European Jews.

“It is the last big anniversary that we can commemorate” with a large group of survivors, said Piotr Cywinski, director of the museum at the site of the former death camp.

“Their voices became the most important warning against the human capacity for extreme humiliation, contempt and genocide.

“However, soon it will not be the witnesses of those years, but us, the post-war generations, who will pass this horrible knowledge and the crushing conclusions that result from it,” he said in a statement posted on the camp’s website.

One hundred Auschwitz survivors from Israel were expected to be among the group of around 300 former prisoners due for the landmark ceremonies.

Belgian King Philip I, accompanied by his wife Matilda along with Dutch royals King Willem-Alexander and Queen Maxima, were also expected to attend, as were more than a dozen presidents and prime ministers from across the globe.

The Archbishop of Krakow, Cardinal Stanislaw Dziwisz-a former aide to Saint Pope John Paul II-will be there on behalf of the Holy See.

Moscow has explained the absence of President Vladimir Putin by the fact that he had not received an official invitation.

But the Auschwitz-Birkenau Museum, which is organizng the event, said no politicians were formally invited this year as it decided to focus on the ever dwindling number of ageing survivors.

Putin was also not expected to attend Auschwitz memorial ceremonies that are being held at the same time in the Czech capital Prague.

Moscow-friendly Czech President Milos Zeman had invited his Russian counterpart to the event organised by the European Jewish Congress at the site of the former Nazi camp of Terezin (Theresienstadt).

“The system introduced and embodied by Vladimir Putin does not respect international agreements, and has been aggressive towards neighbors using force to occupy the territory of a neighbouring state,” the federation said in a statement alluding to Russia’s 2014 annexation of Ukraine’s Crimean peninsula.

Putin had attended the 60th anniversary of the Auschwitz liberation in Poland a decade ago along with several Red Army soldiers who took part in the actual event.

The largest and deadliest of all Nazi Germany’s death and concentration camps, Auschwitz-Birkenau, is the only one to have been preserved as it was abandoned by the Germans fleeing the advancing Red Army.

Other Nazi camps in Poland, like Sobibor, Treblinka and Belzec, were razed to the ground by the Germans in a bid to destroy evidence of crimes against humanity.

At Auschwitz-Birkenau, the ruins of the gas chambers and crematoria that the Nazis blew up before fleeing, are as shocking a sight as the barbed-wire fences and ruins of some 300 prisoners’ barracks that stretch to the horizon.

Poland has created a special €120-million ($135-million) fund to preserve the site. Germany financed half of the fund, expected to provide €4 to €5 million per year to be used over the next quarter century to prevent the site from falling into ruin.

“What the Nazis wanted to destroy, we will rescue from oblivion,” said Wladyslaw Bartoszewski, a former Polish foreign minister who is also a survivor of Auschwitz.