Over 500 Guests To Join Prague Forum On Anti-Semitism 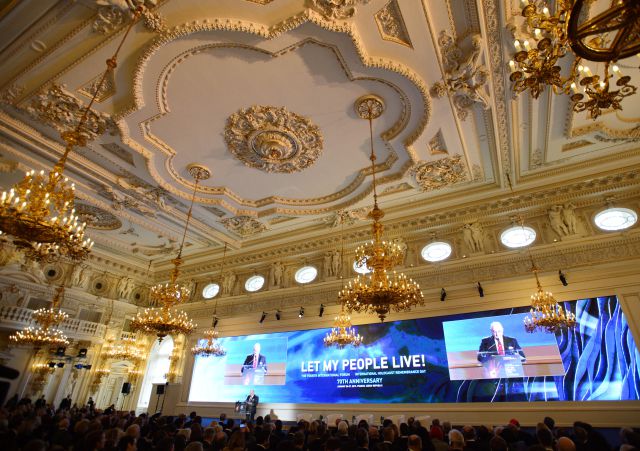 About 30 parliament heads and 500 other guests will take part in an international forum, focusing on mounting anti-Semitism and extremism and held within the two-day remembrance of the 70th anniversary of the Oswiecim (Auschwitz) concentration camp’s libration, at Prague Castle on Monday.

On Tuesday, a tribute to the Holocaust victims will be paid in Terezin, north Bohemia.

Extensive security measures involving hundreds of police will be taken at both venues.

According to the organising European Jewish Congress (ECJ), the main topic of the forum has become even more urgent after the recent terrorist attacks in Paris.

ECJ President Moshe Kantor said attacks against European Jews are now common, persistent and deadly. He said it is even worse that various communities, publicly active people and media all over Europe have started to justify these attacks.

Czech Foreign Minister Lubomir Zaoralek said the hard task is to find a way to face the evil but not increase the hatred.

“The mechanisms that were behind the Holocaust seem to be activated again,” Zaoralek told CTK.

The forum Let My People Live! will open with speeches by Kantor, Czech Prime Minister Bohuslav Sobotka, and the heads of the two houses of Czech parliament, Jan Hamacek and Milan Stech. This will be followed with three panel discussions.

The role of media in influencing public opinion will be also debated by U.S. historian Timothy Snyder and French philosopher Bernard-Henry Levy.

In the discussion about the role of politicians, the heads of parliament of Israel, Romania, Turkey and the Czech Republic will participate.

The first day of the remembrance of the Oswiecim camp liberation will culminate with a gala reception in the Municipal House in Prague’s centre, to which 500 guests are to arrive and Czech President Milos Zeman and European Commission Vice President Frans Timmermans are to deliver addresses.

On Tuesday, a meeting of parliament heads closed to the public will decide on the final version of the forum’s call on the international public. According to the ECJ, the call should declare no tolerance of crimes committed due to intolerance.

Afterwards Zeman, Bulgarian President Rosen Plevneliev, European Parliament head Martin Schulz and other prominent guests will make speeches at Prague Castle. The speeches will end with a European minute of silence that will also be observed in Oswiecim (Auschwitz) and Belgen Belsen, both former Nazi extermination camps.

In the afternoon, tribute will be paid to the Holocaust victims in Terezin. Over 90 Czech Holocaust survivors will be among the participants in the event.

At the same time, a commemorative event will be held in Oswiecim, Poland. This is why the presidents of Austria, France, Germany and Poland will not join the Czech events. Slovak President Andrej Kiska will have a special programme so that he can take part in both the Czech and Polish events.

The Prague Castle complex will be closed to the public on Monday and Tuesday, and traffic will be restricted in the surroundings of Prague Castle and of the Municipal House, elsewhere in Prague, where a gala reception will be hosted on Monday evening.

In Terezin (Theresienstadt), where the Nazis established a prison and a Jewish ghetto in wartime, certain restrictions will be valid on Tuesday.