Can Anything Be Done Against Anti-Semitism? 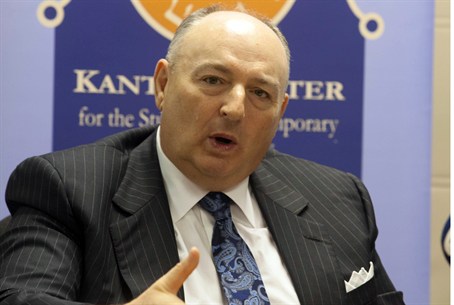 Despite possibility of ‘new exodus’ for European Jews, EJC President Dr. Moshe Kantor has a vision to save the community

European Jewry is at a crossroads, European Jewish Congress (EJC) President Dr. Moshe Kantor stated to Arutz Sheva Monday, as he spoke from the fourth International “Let My People Live!” Forum against anti-Semitism.

“We are at a level of anti-Semitism today which is close to making the decision for Jews to make the new Exodus,” Kantor stated.

Kantor cited two reasons for the upswing in hatred against Jews: economics and Islamic extremism.

“People are simply afraid to send their kids to school, to go to synagogue, to Jewish centers,” he said, noting that his children’s Jewish school has a 25-cm thick iron door protecting the compound which is “indicative” of the current situation.

“When we spoke to [EU Foreign Affairs Chief] Frederica Mogherini about this, she said very wisely, ‘a Europe where parents are afraid to send their kids to school is not Europe any longer.'”

To combat this, Kantor proposed a “multi-dimensional program starting from education, starting from commemoration” as well as a “full consolidation” of community resources and intelligence services “to identify the financial roots, the means of delivery – everything about terrorist organizations and members of terror organizations.”

Kantor gave the example of an attractive terrorist who intends to leave Germany for France; Germany is not obligated to alert France due to laws pertaining to privacy and the freedom of transportation.

Such norms need to be changed from within the institutional framework itself, he insisted, including a set of “common standards” for counterterrorism implemented throughout all EU facilities and institutions. Mogherini has promised such a system, he stated.

Earlier Monday, the conference presented a “road map” for the EU to address terrorism and hate – a 20-step plan which would counteract the rising tide of anti-Semitism and Islamist extremism through four main categories: Prevention of attacks, Protection of targets, Pursuit of known threats, and Responses to reduce the risks of further attacks.