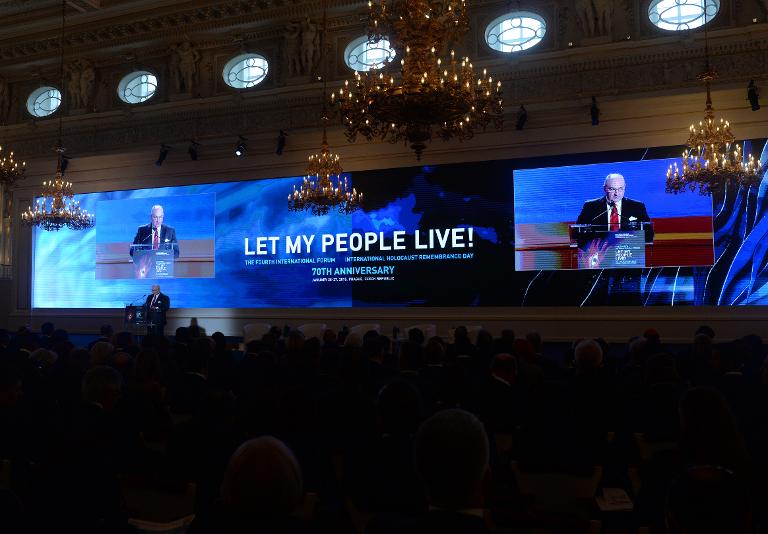 Meanwhile, Europe is facing a new Jewish exodus in the face of rising anti-Semitism and extremism, the head of the European Jewish Congress (EJC) said Monday.

“Jihadism is very close to Nazism. One could even say that they are two faces of the same evil,” EJC chief Moshe Kantor said at a Holocaust forum in the Czech capital Prague.

The Jewish community is “close to” a new exodus from Europe, he told reporters, without providing any specific figures.

In France, home to Europe’s largest Jewish community, estimated at up to 600,000, many are considering leaving as the number of anti-Semitic attacks mounts.

An Islamist gunman shot dead four Jews in a kosher supermarket in Paris on January 9 in a series of attacks in the French capital that left 17 people dead.

Kantor also mentioned the March 2012 attacks in the southern French city of Toulouse when an Islamist shot dead three children and a teacher at a Jewish school.

Figures from London police showed anti-Semitic crimes more than doubled in the capital over the 12 months to November 2014.

Almost half of Britain’s Jews fear they have no long-term future in Britain or Europe, according to a survey published earlier this month by the Campaign Against Anti-Semitism.

Kantor said Europe needed a security institution similar to the Department of Homeland Security, which the United States set up after the 9/11 terror attacks.

“We have to establish in Europe a special envoy on anti-Semitism because the Jewish minority, the oldest in Europe, is the only one which is in danger to be killed and to be expelled,” he said.

The Czech president, the EJC and the European Parliament are hosting the Let My People Live forum, which ends on Tuesday – International Holocaust Remembrance Day.

“Today’s fanaticism, fundamentalism, racism is very similar to that which was happening in the 1930s,” Czech Prime Minister Bohuslav Sobotka said at the forum.