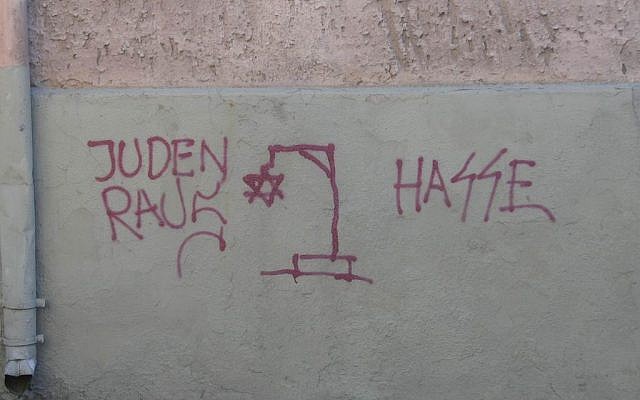 The European Jewish Congress is backing proposed legislation for a pan-European “tolerance” law in an effort to combat bigotry of all stripes, including anti-Semitism, officials said Monday.

But the proposal, drafted by several human rights experts, came under fire as it was unveiled, with some critics at an anti-Semitism summit in the Czech capital warning Monday that legislation was not the answer to eradicating anti-Jewish hate, that the bill in its current form impinges on free speech, and that lumping anti-Semitism with various other forms of hatred was detrimental.

EJC President Moshe Kantor on Monday threw his support behind the proposal, which would grant harsher punishments for hate crimes against Jews, Muslims, Christians, Roma, women, and LGBQT alike across the continent.

“We can adopt this new law of tolerance,” Kantor said at the Let Our People Live conference, organized by the EJC, European parliament, and Czech government.

He added that the legislation had the support of “speakers of European parliaments.”

The conference came as European leaders marked 70 years since the liberation of the Auschwitz death camp at the end of the Holocaust, amid warnings of resurgent anti-Semitism across the continent.

The Czech president and prime minister voiced urgency for “concrete acts” to combat the tide of anti-Jewish hatred sweeping throughout Europe, emerging from jihadist ideology and far-right parties, without specifying what those measures would be.

The new legislation – drafted in a joint venture by Tel Aviv University international law expert Prof. Yoram Dinstein, a retired Italian supreme court justice, and three other legal professors from Germany, Estonia, and Switzerland – would, among other things, criminalize incitement to violence and “group libel,” such as negative stereotyping, target group-to-group intolerance, and ban neo-Nazi and other discriminatory organizations in Europe.

In a panel on Monday, Harvard law scholar Alan Dershowitz was one of several experts who took issue with the proposal, arguing that “the great test of democracy is to be tolerant to the intolerant,” provided that the intolerance does not deteriorate into violence, or the encouragement of violence.

“The vast majority of people living in this world are intolerant. Any moment we spend trying to legislate tolerance rather than educating intolerance is a misallocation of resources,” he said.

Jewish-French philosopher Bernard Henri-Levy criticized the inclusion of anti-Semitism under the blanket definition of “intolerance” or racism.

“The answer to anti-Semitism is not tolerance,” he said, pointing to the pejorative sense of the word. Levy also distinguished between racism and anti-Semitism, saying they were actually “the opposite” as the former castigates the visibility of an undesirable group, the other has always focused on the diabolical invisibility of Jews.

Dinstein acknowledged the stringency of the bill, affirming that under it, cartoonists from French satirical magazine Charlie Hebdo “should have been prosecuted,” due to group libel with their anti-Muslim cartoons.

Levy came out strongly against measures that would limit free speech, defending Charlie Hebdo, which became awash in support in Europe earlier this month after Islamist terrorists killed 12 people at the magazine’s Paris office, and said their cartoons were not incitement.

Holocaust denial, he maintained, was “the only legitimate form” of criminal speech.

Dershowitz also defended the “racist, bigoted horrible magazine” which he said he wouldn’t ban, despite his objections to its content.

While the other panelists insisted that legal measures alone would not weed out anti-Semitism, human rights expert and former Canadian justice minister Irwin Cotler seemingly came out in favor of using legislation to fight anti-Semitism and said that in 2004 Canada was hit by a spate of anti-Semitic attacks, which was subsequently successfully stymied by a series of legal measures. “We had our mini-France back then,” he said.

However, he did not specifically back the legislation proposed Monday.

Dinstein, meanwhile, undeterred by the criticism, insisted that he would continue to promote the legislation to European governments, in the hopes that like Holocaust denial criminalization, which he said was initially perceived as a “pipe dream,” the tolerance law will ultimately take root.