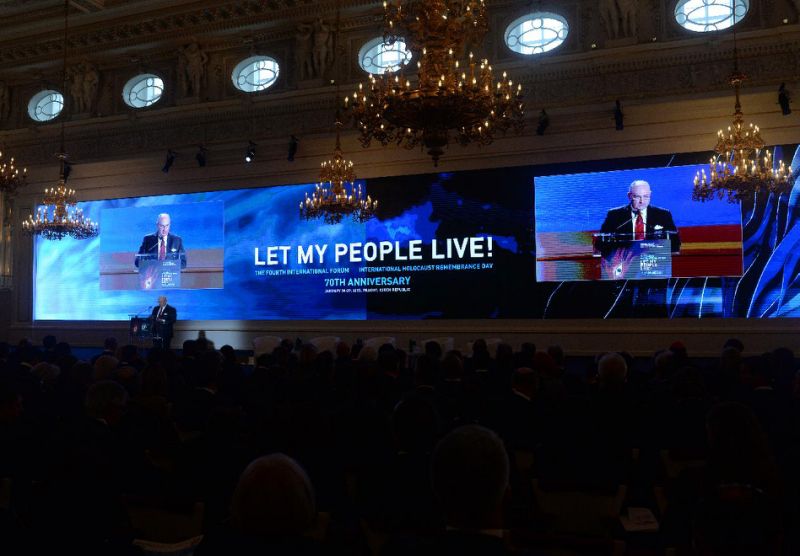 Jews are close to a new exodus from Europe where they face economic pressure and radical Islam in some countries, European Jewish Congress (EJC) President Moshe Kantor told journalists before the opening of an international forum about the Holocaust in Prague Monday.

He recalled the violence against Jews that occurred in Europe last year: the three Jewish children shot in front of their school in Toulouse, France, in March, four people murdered in a Brussels Jewish Museum in May, and a brutal assault of a couple in their flat in December in Paris.

Earlier this month, four hostages were killed by a terrorist in a kosher grocery store in Paris.

Kantor called on European government to guarantee more security for the Jews and take legislative steps in this respect. The discussion about these steps opens at the Prague forum Monday.

The proposals will be included in the document the present parliament chairpersons are supposed to pass.

Kantor said the planned document constituted a moral satisfaction that would comprise 20 steps to be taken.

The text is to be drafted at a closed meeting of the parliament chairpersons on Tuesday.

Kantor said he was for the creation of a European office for internal security, European legislation for intolerance crime and the post of a European envoy for anti-Semitism.

These are the questions in which Europe and the EU can be very active, Czech Prime Minister Bohuslav (Social Democrats, CSSD) said.

Sobotka said education of the young generation was even more important than legal measures. It should be able to draw conclusions from history, he added.

“The present-day fanaticism, fundamentalism and racism are very similar to what was going on in Europe in the 1930s,” Sobotka said.

The European Jewish Congress is the main organiser of the forum in which 30 parliament heads and 500 other guests participate. The event marks the 70th anniversary of the liberation of the Oswiecim (Auschwitz) concentration camp, which will be also remembered in Poland on Tuesday.

Kantor said two factors have been behind the current violence – economic aggression, for example in Greece and Hungary, and radical Islamism.

In Greece and Hungary, Jews and Romanies are under stronger pressure than other communities.

Kantor is a Russian billionaire, allegedly with close ties to President Vladimir Putin.

He did not answer questions concerning Moscow’s policy towards Ukraine Monday. He only said Putin is a big friend of the Russian Jewish community.