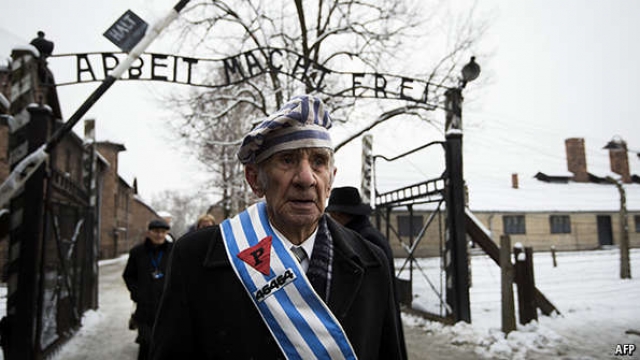 At the 70th anniversary of the camp’s liberation, war and ethnic hatred in eastern Europe are topical once more

A decade ago at the 60th anniversary of the liberation of Auschwitz by Red Army troops, survivors of the Nazi death camp huddled on chairs in the freezing cold while politicians, including Russia’s Vladimir Putin, made long speeches. For the 70th anniversary ceremonies being held today, probably the last major one the aging survivors will attend, the plan was to make the survivors (including Miroslaw Celka, pictured) the centre of attention. Instead, politicians are again grabbing the limelight.

Instead of focussing on the sheer horror of a place that saw 1.1m people murdered, most of the attention has turned to Mr Putin. The Russian leader decided not to attend the ceremony in Auschwitz, feeling snubbed because Polish authorities had not invited him. In fact, the Poles had deftly avoided inviting any politicians in person; the Auschwitz museum simply alerted embassies that there would be a observance on January 27, and asked who would attend. Other officials, including Germany’s president Joachim Gauck, got the message and said they would show up. So did Ukraine’s Petro Poroshenko (with a helping hand from Poland’s prime minister, Ewa Kopacz, who asked him whether he planned to attend while in Kiev earlier this month).

Poland has been one of the strongest advocates in the European Union for taking a tough line against Russia over its armed interference in Ukraine. The thought of Mr Putin speechifying over the Red Army’s defeat of Nazism, even as his country sends soldiers and weapons into Ukraine, left Poles cold. The Russians, meanwhile, took offence when Grzegorz Schetyna, Poland’s foreign minister, pointed out that it was a Ukrainian who drove the first tank through Auschwitz’s gate in 1945, part of a Red Army force named the First Ukrainian Front. The Russian Foreign Ministry called on Mr Schetyna, a historian, to “cease to mock history and extend anti-Russian hysteria”. Russia has tended to appropriate the achievements of the USSR as its own, although it was only the largest of that defunct state’s 15 constituent republics.

Russia will be represented at the Auschwitz ceremony by Mr Putin’s chief of staff, Sergei Ivanov. That will avert any repetition of the awkward meetings between Mr Putin and western leaders during November’s G20 summit in Australia. But the antipathy to Mr Putin extends far beyond Poland. The Russian leader had been invited by the president of the Czech Republic, Milos Zeman, to take part in a forum on Holocaust history on January 26th and 27th in Prague, commemorating the nearby Terezin concentration camp. Among the organisers of the forum is Vyacheslav Moshe Kantor, a Russian chemicals billionaire with strong ties to Mr Putin who heads the European Jewish Congress. The invitation served to underline Mr Zeman’s close ties with Russia and his lack of support for beleaguered Ukraine, and sparked protests in Prague. In the end, Mr Putin is not going to Prague either.

Besides honouring the Holocaust’s victims, organisers of the events in Prague and at Auschwitz want to bring public attention to a renewed wave of anti-Semitism and intolerance in Europe. But at both events, the historical commemorations have been overshadowed by Mr Putin and the warfare in eastern Europe his government has incited. Such tensions are nothing new; since the end of the second world war, argument has raged over whether the Holocaust should be commemorated as a unique historical horror, or used as a reference point for current events. The survivors attending today’s ceremony may be glad that their knowledge of the horrors wrought by ethnic hatred and nationalism has never been more relevant. Yet it might also be nice for the world to honour their experience of hell on earth at Auschwitz without being distracted by the politics of the moment.