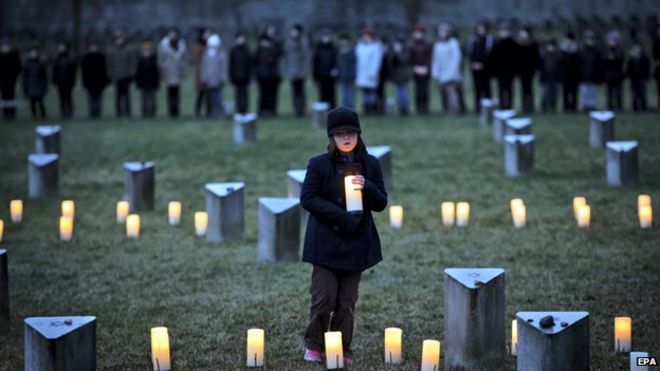 Some 400km (248 miles) west of Auschwitz is the Czech town of Terezin, another rather non-descript place which takes some finding on a map of Central Europe.

Like Oswiecim (Auschwitz) it was once an important railway junction serving the outer reaches of the Austro-Hungarian Empire. And like Oswiecim, its German name – Theresienstadt – became synonymous with the horrors of the Holocaust.

Theresienstadt was a transit camp where some 150,000 Jews, mostly Czech, languished for months or years before being sent on to their deaths at Auschwitz or Treblinka. Tens of thousands – including many children – died there.

This year, Terezin hosted a special commemorative event, the culmination of a two-day international conference in Prague on anti-Semitism and extremism, organised by the European Jewish Congress (EJC).

The EJC wants Europe to move beyond acts of solemn commemoration, towards tangible changes in legislation in every European country, to protect Jews not just from classical anti-Semitism or an increasingly mainstream neo-Nazi movement, but also the threat of Islamist radicalism.

This is especially urgent, says the EJC, in the wake of the attacks by Islamist extremists in Paris, Brussels and Toulouse.

“You know how many radicals that makes? A direct calculation is 15 million people. It’s almost equal to the Jewish population of the world. And it’s a serious problem.”

The EJC has spent the last four years drawing up what it calls a “European Framework Statute for the Promotion of Tolerance”. Mr Kantor wants every parliament in Europe to adopt it (which is why three dozen heads of parliament were invited to Prague) – to enshrine into law the notion of “secure tolerance”.

The idea is to go further than the existing anti-racism legislation, enshrined in the European Convention on Human Rights.

Civil libertarians will gasp at the proposals. The statute carries a long list of fundamental rights and freedoms – to speech, expression, religion etc.

But the document also codifies specific limitations to those freedoms. Wearing a full-face veil would essentially be a criminal offence in every European country, as would denying the Holocaust, or condoning a terrorist act.

The EJC stresses this is still an early draft – the idea of presenting it in Prague was to provoke serious discussion. But even some panellists at the conference appeared uneasy.

“I worry about the provision that talks about speech which holds a group to ridicule, or subjects it to false charges,” the prominent US lawyer, Alan Dershowitz, told the BBC.

“In 1800 [then US vice-president] Thomas Jefferson wrote a letter from the White House, in which he said that you should never punish the preacher that preaches evil, but the person who does the evil. That was 215 years ago, and the problem still remains.

“We now have preachers who preach evil and people who follow up on that evil, but the question is: where do you focus your attention, on the speech or on the actions?”

So far the idea of a “model law on tolerance” has received a muted response from Europe’s lawmakers.

But Mr Kantor and others hope this month’s Paris attacks on the office of the satirical magazine Charlie Hebdo and a kosher supermarket – have focused minds.