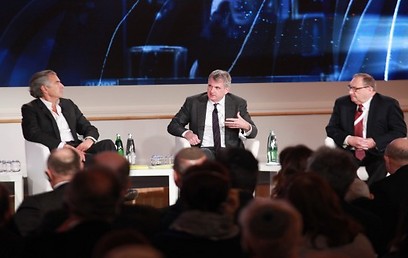 A two-day international meeting organized by the European Jewish Congress (EJC) together with the Czech government opened in Prague on Monday, the eve of International Holocaust Remembrance Day, to discuss the rising anti-Semitism in Europe.

The fourth international “Let My People Live!” conference gathered for the first time a high-level and official pan-European forum to discuss practical ways to combat the rise of anti-Semitism, racism and religious radicalism in Europe.

Participants included speakers of parliaments, lawmakers, lawyers, experts and politicians who focused on the rise of the radical right and Islam and the threats to Jews in the continent.

EJC President Dr. Moshe Kantor said during the conference that “99% of Muslims are normal people who obey the law and have never taken part in executions, pogroms or acts of murder.”

Kantor said, however, that Europe is on the cusp of “a new Dark Ages.”

He explained that “recent atrocities in Paris, Brussels and Toulouse are visible manifestations of the deep structural problems embodied in European society today. This, coupled with the continuing electoral successes of extremist parties in European, demonstrated in recent elections across the continent, shows that unfortunately, Europe is on a dangerous path.

“We need practical solutions and so we have prioritized the adoption of the European Framework National Statute for the Promotion of Tolerance,” he added.

This Model Law, drafted by leading European experts and legislators, and supported by the EJC, defines the limits of tolerance, which is the demand for security. This is intended to be a pan-European law that for the first time deals with not only the general commitment to tolerance, but defines the values that needs preserving and the limitation of tolerance towards minority groups who risk the security of other minorities and of their host countries.

The forum took place just over two weeks after the attacks on Charlie Hebdo and the Hyper Cacher supermarket, which left 17 dead and on the same day as the neo-Nazi Golden Dawn came in third place in the Greek general election.

“In the immediate term, intelligence-gathering and sharing across Europe must increase. It is now well known that all of the perpetrators of the attacks in Paris were on the radars of intelligence and police officials. The question of prevention must be readdressed, because the current paradigm is simply not working,” Dr. Kantor said.

“Police and law enforcement also need to be strengthened. This includes actively enforcing laws against incitement and anti-Semitic speech, and taking a firmer approach against those who promote hate and violence.”

“Never before, has Europe’s intellectual elite joined with the continent’s senior political leadership and top-legal experts within the same conference to genuinely address the very real threats faced by al Europe’s citizens. Now we must transfer these important words into real action.”

‘Jihadism is very close to Nazism’

Kantor added that a small percentage of immigrants, who hold radical Islamic views, are responsible for the situation.

“Jihadism is very close to Nazism. One could even say that they are two faces of the same evil,” he stated. “The neo-Nazis and the far right have already entered parliaments in different countries, as well as the European parliament.”

“Europe’s Jews are the only minority today which is afraid of sending its children to school,” he said. “The steel door at my children’s school, for example, is 20 centimeters (8 inches) thick. Not every mother can open such a door without help.”

Czech Prime Minister Bohuslav Sobotka said at the forum that “today’s fanatism, fundamentalism, racism is very similar to that which was happening in the 1930s.”

Czech president Milos Zeman spoke about the short distance between the Theresienstadt concentration camp, which the forum’s participants were to visit on Tuesday, and the Auschwitz death camp in Poland, and called for steps against anti-Semitism and radical Islam in Europe.

Czech Senate President Milan Štěch said that “about 30% of Europe’s Jews suffer from anti-Semitism.” He warned that people must not be afraid to come to Europe and said that while human rights must be defended, freedom of expression must not be affected.

Israel was represented at the forum by Knesset Speaker Yuli Edelstein, who said upon living for the event that he planned to firmly call on all leaders to combat anti-Semitism.

Addressing European parliament heads, Edelstein said: “We must continue working together in order to guarantee that we will be able to enjoy the blessings of democracy without giving any room to radicalism in general and Islamic radicalism in particular, and without compromising on the values we support wholeheartedly or on our lives.”

Moscow’s chief rabbi and president of the Rabbinical Center of Europe (CER), Rabbi Pinchas Goldschmidt, called for a war on anti-Semitism while criticizing the authorities in Europe.

“What we experienced both in Paris and in Brussels strengthens the notion that there is an existential danger,” he said. “The European authorities have taken steps, but it’s a shame that it wasn’t done three years ago, immediately after the massacre in Toulouse. It would have saved lives.”

He mentioned the manifesto released by the CER about two weeks ago. “We raised three concrete proposals: That Europe’s spiritual leaders should study in European institutions, and if they have studied outside Europe, they must receive approval that the institution is not recognized as radical; that any funds supporting religious organizations in Europe must come from within the continent, and that any donation of more than 5,000 euros will be made public in order to ensure that the money isn’t coming from radical elements.

“Third, there are many religious people in Europe – Jews, Christians and Muslims. The religious communities must have an individual in charge of combating radicalism inside the community. Only a person from the inside will be able to distinguish between legitimate and radical texts. The Bible and Quran can be taught through love or hatred.

“We also spoke to members of other religion in order to make the required change, and in order to be able to check people who return to Europe after fighting for the Islamic State.”